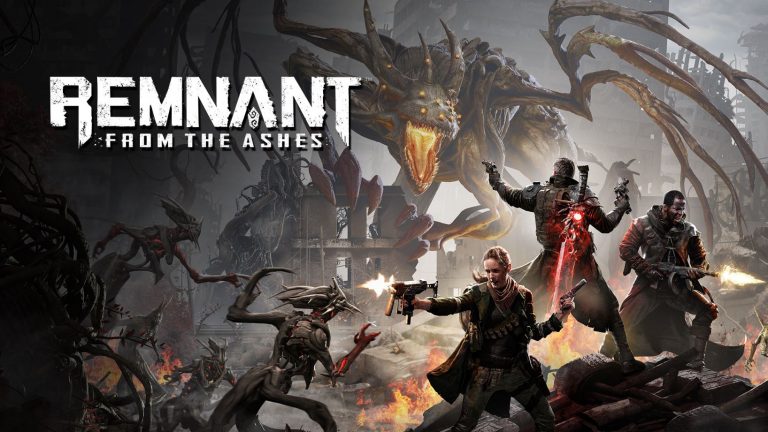 We haven’t been able to spend too much time with Remnant: From The Ashes yet. However, you can take a look at our first impressions of the title below. The following impressions are based on two and a half hours with the game.

The intro to Remnant: From The Ashes follows the trend of other looter-shooters. It is a simple “Go Here” mission, with very little to actually do other than walk from one place to the next, and it is generally dull and unrepresentative of the experience that follows. But once I got out of that 45-minute chunk of tutorials, walking, and a whole lot of talking, Remnant: From The Ashes has offered challenging enemies, enjoyable combat, and surprisingly deep character customisation.

Gunfire Games’ latest adventure is set in a post-apocalyptic, fantasy world filled with mythical creatures that have forced humanity into hiding. You create a character and build them up with better loot, stronger weapons, and more resistant armor on your own or in a team of up to three.

This appears to be the core of Remnant, as the story so far has mostly been world-building and giving you a reason to go out and fight. That fighting takes place in a sprawling maze of interconnected, deadly environments on the ruined planet Earth. The levels I have seen so far are split into distinct sections that you travel between with checkpoints at every entrance and exit. These checkpoints will refill your ammo and limited-use Dragon’s Heart, which is effectively an Estus Flask, at the cost of respawning enemies.

The levels usually alternate between the dilapidated buildings and streets that nature has reclaimed or the man-made, pristine, concrete and brick sewers and train stations. The environments on Earth are quite gorgeous, especially in the underground levels where fauna has grown across train carriages and walls, lighting a room in a hue of red.

The outdoor environments on Earth (the only location I have visited) have been a little bit more monotone. It’s mostly greys and browns. However, I know the color palettes change with each new location you visit; so, I am expecting some more diversity as I continue to play. But, those gorgeous environments are juxtaposed with deadly, somewhat gross and deformed creatures roaming around them. So far, enemies have been challenging, yet not unfair. Each level has your cannon fodder, requiring a couple of bullets and they are dead; but sprinkled among them, in every room or two, is a stronger enemy that requires tactical thinking and smart dodging.

So far, I have come across a few of these. A Shrieker enemy is your usual summoner and will teleport around the arena and spawn a number of minions. An enemy that holds two cleavers in front of its body, blocking your shots, was a particular challenge, requiring me to bait an attack and shoot it in the face, stunning it before it was able to deal a chunk of damage to me.

And then at the end of these locations, you can find bosses that are incredibly challenging and practically require co-op play, due to the damage they deal, the number of additional enemies that spawn, and the need to split the work between multiple people to stand any kind of chance of taking the monstrosity down. Remnant can be played completely alone; however, even only a few hours in, it is clear that the game is meant to be played with your friends due to how encounters are tuned for two or three players. But, if you don’t have friends playing the game, matchmaking is an option that allows you to party up with random people and go out fighting together.

I have only briefly been able to try this due to the lack of a playerbase on PS4 before launch. However, it worked well and there was no lag or gameplay issues. Whilst you are killing all those enemies, with comfortably snappy and precise third-person shooting, you are constantly gaining XP and picking up new materials, consumables, and loot, which all works towards building out your character and improving their strength and resistance. Early on, you can choose from three different classes, which offer unique weapons and Weapon Mods, which are your abilities.

The three classes fall into the traditional close, medium, and far range roles. The Weapon Mods help develop these classes a bit more. I made the choice of the Hunter archetype, which focuses on long-range combat, providing me with a mod that allows me to mark enemies through walls and surfaces for around one minute.

If that seems like a lot, it’s because it is. Almost all of these abilities last for an extended period of time and recharge with each enemy you kill, making them truly worth saving for the right moment, as they can be key to succeeding in a tough fight.

Along with Weapon Mods that are equipped to your two firearms, Traits act as passive bonuses that will boost the stats of your character, such as your health and movement speed. Both of these can also be earned or crafted at merchants back in your home base of Ward 13, which also allows you to buy consumable health bonuses, movement speed buffs, and a host of other items.

I haven’t gotten deep enough into the game yet to be able to fully understand how the loot system and progression will work in the long term. But based off of the early glimpses I have got, there looks to be quite a bit of diversity and synergy between the many facets of the loot system. I feel like I have barely scratched the surface with Remnant: From The Ashes. There is so much more to discover down the line, such as the Boss Weapons I have only heard about from tooltips but not yet seen as well as an entire stats screen for my character filled with strength, bonuses, resistances, and weaknesses. Oh, and the melee. You get a sword, and it feels so satisfying to slice through the weaker enemies.

Even though I am only a few hours in, the environments Gunfire has created intrigue me, and the core combat loop of killing enemies, using your abilities, and fighting bosses has me hooked in a way that no looter shooter has since original Destiny back in 2014. I am itching to get back in and see what more the game has to offer down the line.

Remnant From the Ashes is available now on PS4. Expect our full review of the game later this week.