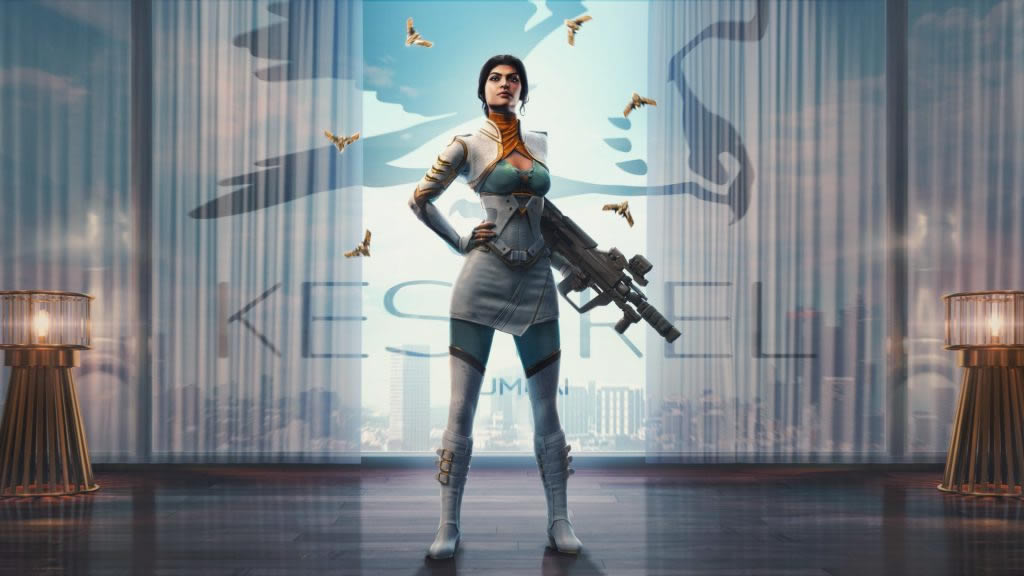 First Watch Games has unwrapped the Rogue Company update 1.48 patch notes for your viewing pleasure, which is live now for PS4, PC, Nintendo Switch and Xbox One versions of the game. This latest Rogue Company update is pretty major, adding new character in the shape of Kestrel, the Knight SMG weapon, plus a range of bug fixes.

One of the founding members of Rogue Company, now retired, Kestrel has been called back to even the playing field against Jackal.

Halo Drones: Deploy a cluster of halo drones at your location that will fire a barrage of rockets in the direction you are looking.

Note: We have increased the inner and outer blast radius of these drones from their values on PTS.

Welcome to our newest limited-time mode, Sabotage. In each round of this 4v4 match, both teams fight to take control of a neutral bomb and detonate it in the enemy team’s zone or eliminate the enemy team’s tickets. If you have the bomb, be careful because the enemy team can see you!

Similar to Strikeout, you can respawn as many times as you like until you run out of tickets. A best of five rounds will determine the winner and you’ll switch sides each time!

Each round lasts 4 minutes.

Each team has 40 tickets.

The respawn time is 7 seconds.

A team wins by planting the bomb or having the most tickets left when the round ends.

There is no defend time once you plant the bomb.

While a player is holding the bomb they are revealed to friendlies in green and enemies in gold.

The bomb will reset where it spawns if it gets thrown off the map or is idle for 30 seconds.

The Season One Battle Pass is Rogue Company’s first and it’s filled with 50 rewards you can earn! By simply playing the game, you’ll earn Battle Pass Levels and work your way to the top to unlock the coveted Hellfire Protocol Scorch.

In Season One we are introducing boosts that you can earn at various levels in the Battle Pass. A few important notes:

These boosts will increase your base experience gained by 100% before bonuses.

Only one boost can be active at a time.

Once activated, the boost will continue running even if you are offline.

You can view and activate your available boosts in the “Boosts” menu found in the bottom left corner of the main menu.

The climb to Rogue is not an easy one, and we want you to have a real feeling of accomplishment as you move up through the ranks. Season One will better define where players stand by introducing 6 new Tiers from Bronze to Rogue, the first five containing 5 separate Divisions.

With the new Ranked system, we want to create competitive matchmaking, and with this in mind, we are introducing new features to place you with players close to your skill. At the beginning of each Ranked Season, players will participate in 10 placement matches and placed in a Tier and Division based on their performance.

The second way we are improving matchmaking for Ranked is the inclusion of party restrictions. In Season One you will not be able to queue in a party unless all members are within 6 divisions of each other.

With Season One, we are removing the Level Reputation earned per match and providing it in a different way. The following changes have been made:

Rewards given at each level have been doubled.

Contract rewards have been increased significantly (300 and 500 per contract).

Contracts renewal will now provide you with 3 contracts at once per day instead of 1 every 6 hours.

New contracts have been added.

Some contracts have been adjusted to make them easier to achieve.

Fixed some issues that prevented Anvil from deploying his Barricade in various places.

No longer has Arren L2-12. Now has Nightshade.

No longer has Trip Mine. Now has C4.

Players have 2 charges of Barbed Wire instead of one.

Size reduced from 9 meters to 4 meters.

Can no longer be destroyed with melee attacks.

Headshot damage increased from 54 to 58.

Fixed an issue that inadvertently increased the MX-R’s fire rate. The fire rate is now 4.7.

Headshot damage reduced from 48 to 44.