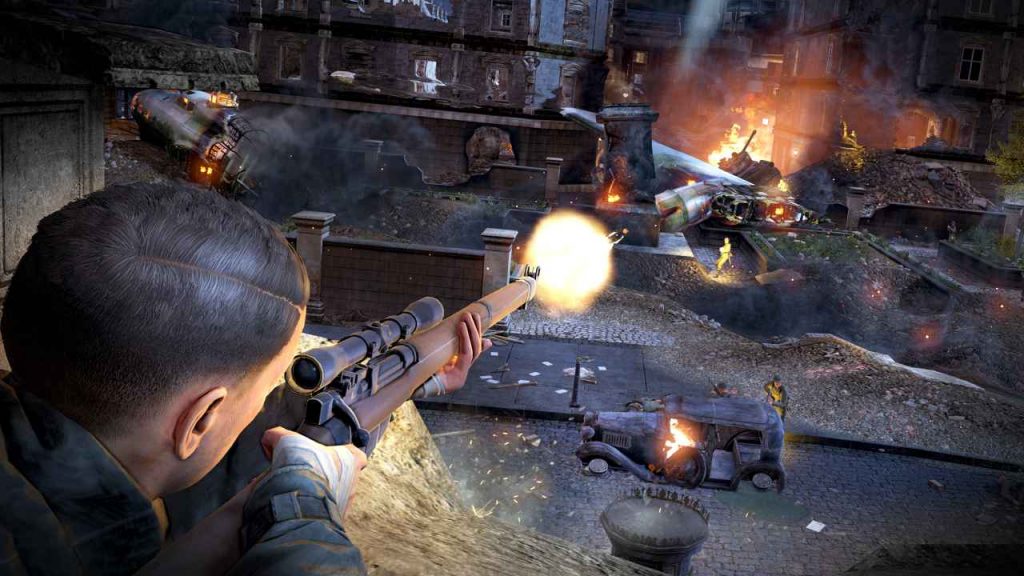 Back in 2014, I played through Sniper Elite V2 and enjoyed my time with it. I quickly moved on and mostly forgot about how I felt about the game. Having not played either of the subsequent games, playing through some of the first levels of Sniper Elite V2 Remastered was like meeting back up with an old friend and remembering the experiences you had together. I reminisced about how brutal and rewarding the Bullet Cam was, I remembered a level layout that I had long forgotten, and I discovered that Sniper Elite’s core gameplay is still captivating years later.

As soon as I took my first shot in Sniper Elite V2 Remastered, I was hit with a rush of adrenaline, excitement, and exhilaration that I had forgotten about, something I only remembered upon pulling the trigger for the first time. Sniping in V2 Remastered feels just as satisfying and rewarding as I remembered it five years ago. It feels raw, visceral, and snappy. Pulling the trigger and having the camera follow the bullet all the way into and back out of an enemy’s skull is gratifying, as I saw the deadliness I was capable of close-up and in gruesome detail, thanks to the Bullet Cam.

Pulling off multiple kills in a row without missing a shot, watching as the bullet shatters skulls and pierces organs, is incredibly satisfying. Similarly, sniping from two-hundred, sometimes even three-hundred meters away feels like a moment of victory as I accurately lined up my shot, accounted for bullet-drop, and kept my cool, just like a real sniper has to do. I still had the option to hold my breath, which will show you where your bullet will land and steady the scope. This feels slightly less fulfilling; however, the rifle’s punchy sound and the Bullet Cam you are rewarded with makes it easy to forgive.

When I wasn’t sniping, I still had my two alternate weapons to use: a short range SMG and a silenced Welrod pistol. Tending to seem clunky and a little imprecise, shooting with these weapons didn’t feel nearly as refined as using the sniper rifle. That wasn’t too much of an issue as they were not the focus of the gameplay for the levels I played. In fact, I mostly used them for emergencies only. For example, I would pull out my SMG if enemies had noticed me. The Welrod was only necessary if an enemy was close to me and I wanted to remain hidden.

I got my hands on three levels from across the game’s main campaign as well as the DLC content, the latter of which comes bundled into V2 Remastered. The two levels from the main campaign I played were the first two in the game. The first level, Schoneberg Convoy, had me hunting down an expert in rocket engines, Dr Gunther Kreidl, to kill. Taking place in the streets, this level was the catalyst that made me remember so much that I had forgotten about Sniper Elite V2. Fighting in the streets and picking off enemies at a distance, along with sniping enemies from above, creates engaging gameplay I hadn’t experienced since I played the game back in 2014.

This level also reminded me of the pinpoint accuracy needed to hit a vehicle’s fuel cap and cause it to explode. Up until that point, I was playing a little sloppy. However, encountering a devastating tank ensured that I perfected my aim for future levels and made me take more care with my shots.

The second level I hopped into was Mittelwerk Facility. Here I had to enter a rocket production facility, blow it up, and get back out. A mechanic I had completely forgotten about gets introduced here: using loud sounds in the environment to mask my sniper shots. This mechanic added to the already rewarding sniper gameplay by tasking me to not only line up your shots but to time them with the blaring announcements and machinery going off in the environment, indicated with a symbol in the top-right corner of the screen. This makes the satisfaction I felt when pulling off a kill even greater as I had to show an extra level of proficiency to pull it off and remain in stealth.

Trying to stay in stealth and slowly pick off a courtyard filled with enemies was one of the most memorable moments, as I felt like I had control over everything that could happen in this one situation.

The final level I tried was originally a DLC level. Yes, I got to kill Hitler in V2 Remastered. Titled Assassinate the Fürher, this level had me work my way up to a vantage point so that you can snipe the Dictator himself as he tries to escape on a nearby train. The sense of urgency in this level provided a refreshing change to the main campaign. Instead of slowly working my way through an area, I had to kill him before he escaped, sneaking in a shot as he darted from cover to cover. I hope the other DLC levels offer similar scenarios that are different from those found in the main campaign.

Sniper Elite V2 Is Still An Enjoyable and Rewarding Ride

The three levels I tried were all a treat to play through; and, I didn’t experience any issues either. As this is a remaster and not a remake, environments can look a little sparse and textures still lack the detail found in new games developed today. However, the core gameplay of Sniper Elite V2 Remastered is still just as rewarding and addicting as it was back when it released, so these visuals didn’t matter. I was having so much fun sniping enemies from across streets that the visuals faded out of my view, almost as if I was looking down a sniper scope myself and the world around me was out of focus.

Developed and Published by Rebellion; Sold Out distributes retail versions of the game. Sniper Elite V2 Remastered releases on May 14, 2019, for PlayStation 4, PC, Nintendo Switch, and Xbox One. Game code provided by the publisher.