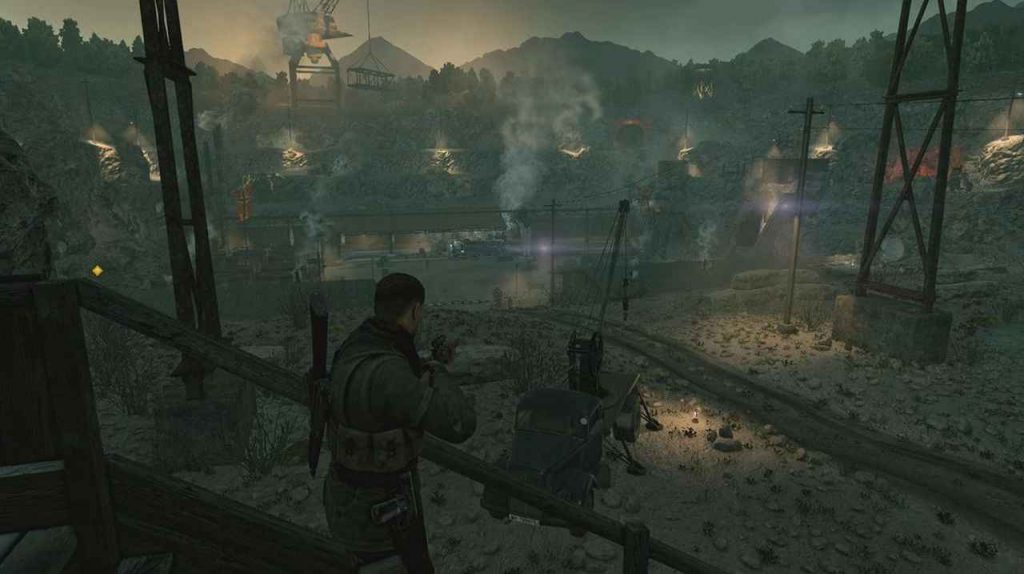 Mittelwerk Facility is the second main level in Sniper Elite V2 Remastered. This level tasks you with entering a V2 Rocket Production Facility, destroying it and escaping back out. Here is our full walkthrough of the level.

You will start the level at the top of a hill, outside the facility. To your left, there is a tower you can climb. Crouch and sneak up there, killing the guard at the top with your Welrod. The announcement being played over the speaker will mask your sniper shots, allowing you to kill enemies from afar and remain in stealth. When your shot will be masked by the sound is indicated by the small, curved lines in the top right corner of the screen. Look back at the radio tower. Resting on the ledge, just behind the ammo box is a Hidden Bottle you can snipe. In the courtyard below there are three guards. Take out the two further back first, before taking out the one smoking next to the hut.

Head down the tower and walk to the front of the green hut on the left. There is one enemy in this building. He may be walking out; therefore, aim with your Welrod and take him out with a headshot as soon as you can. Look into the last window of this building. On the desk, you can find a Hidden Bottle to snipe. A couple more enemies should have come out of the facility and noticed the bodies. Snipe them from this hut.

Head to the opposite end of the hut and pick-up the Gold Bar on a box, next to the beds. Make your way to the other hut, and go to the room on the right as you enter. On the desk, you can find another Gold Bar. Head to the opposite end of this hut. Take a right before you reach the stairs to find a Gold Bar sitting in a toilet. There will be a few more enemies outside now. Pick them off from this hut.

Before we head inside, we need to climb the Tower where the enemy and Hidden Bottle was. At the top, on a box, you can collect the fourth Gold Bar. Head back down and proceed to the entrance of the facility. There may be a few enemies here, just take cover and snipe them from afar. As you head in, enter the room on the right to find another Gold Bar on the desk at the back. This next combat arena has a lot of enemies. I am going to suggest clearing them out first before we plant the explosives and get the collectibles.

Head up through the corridor ahead first. Two enemies will walk by you. Use your Welrod on both of them as quickly as you can. Up, on the balcony, you can find an Officer. Kill him with your Sniper Rifle, when the machinery is activated, masking your shot. Do the same thing for the soldier walking down the hall on your right. At the end of the train carriages on your left, at the far end, you will find another soldier walking towards you. Kill him when the noise will mask your shot.

Now, head up the hall marked with the number 40. Halfway up, head into the rooms on the right and wait for the soldier to pass you. Use your Welrod on him.

A few more soldiers will start walking towards you from down the hall. Hide behind the rocket in the corner and wait for them to pass. Use your Welrod on the closest one, before heading back down the hall to kill the second soldier. Head back to the rocket you hid behind and use your Welrod on the Officer on the balcony. Continue all the way down the hall and head through the hall marked with the number 38. The final few enemies should be wandering around here. Take it slow and kill them quietly if possible.

With all the enemies dead, head back to the where you killed the first two guards. Head up to the balcony with the Officer and plant the explosive. Now, head down the hall marked 38. Halfway down, you will see an elevator. Inside this elevator, behind the boxes, you can find another Gold Bar Head back to the starting location and go down the hall marked 39. On the table, in the first room on your right, is a Gold Bar. Whilst you are here, plant the explosive in the room on the left. Head back to the starting location and go all the way to the end of the hall marked 38. Look to your right to find a Hidden Bottle, just outside of the playable area. Plant the final explosive on the balcony where you killed the second officer.

Reaching The Office And Escaping

Head down the hall marked with the number 40. Some enemies will spawn here; so, take cover and snipe them. At the front of the train, the metal shutters will have opened. Head on through and stand next to the scaffolding on the left side (shown below). Look through your scope at the rocket tips on the right side. On the second to last one, you can find the fourth Hidden Bottle. The scaffolding has two Gold Bars hidden on them. To get the first one, head up the stairs on the right, climbing to the top level. Next to the tip of the second to last rocket you can pick-up the Bar. Head back down to the bottom floor and go up the second set of stairs on the left side. At the base of the last rocket, you can find another Gold Bar. Follow the objective marker up to the office. Before you head inside, look at the top of the bookshelf against the wall and snipe the final Hidden Bottle. Head inside. Once the cutscene has finished, look on the desk in the back corner of the room to collect the final Gold Bar. Take cover by the window and snipe the couple dozen of soldiers that are now shooting at you. There are a few exploding canisters around the arena to shoot. Take this slow and pick off the enemies one by one, returning to cover to regenerate your health. Once the shooting has stopped, head down to the lower level and head back through the area you just came through. As you reach the second and third rocket, more enemies will spawn. I suggest running up to these rockets and then immediately retreating back to the first rocket and taking cover. These enemies can easily flank you, which is why you want to retreat.

Once they are all dead, follow the objective marker back to the entrance of the facility and back outside. Once outside, take cover as there will be an enemy up in the first tower. A truck will pull up with a few more enemies as well. Take them out with your sniper and then progress back to the gate to complete the level.