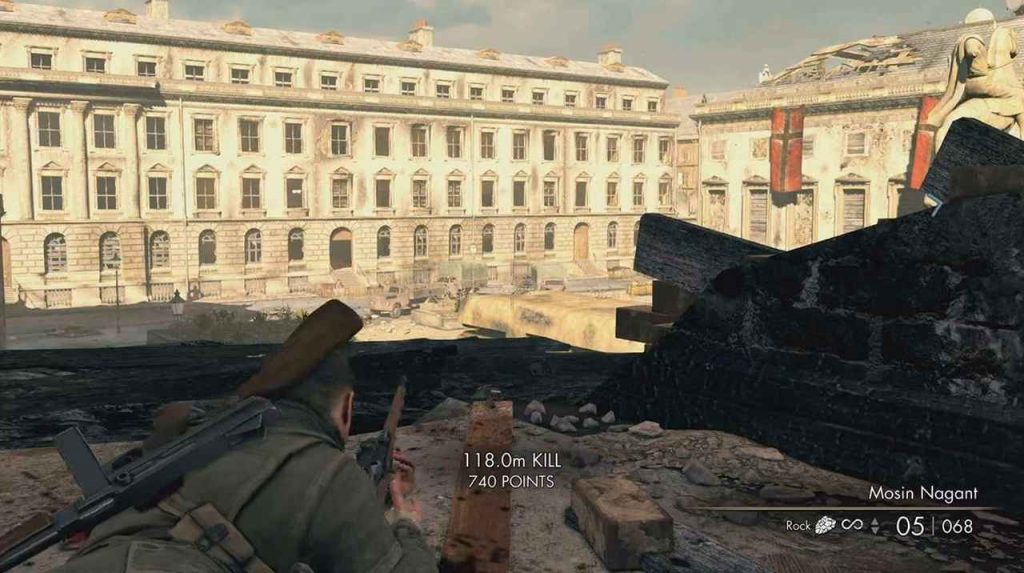 Opernplatz is the fourth main level in Sniper Elite V2 Remastered. In this level, you need to rescue a target and keep him alive as you are ambushed by enemies. Here is our full walkthrough of the level.

The level opens with you in a street surrounded by buildings. Head down the street until you see some enemies in the distance. There are three enemies here. Take them out with your sniper rifle.

Just before the final building on your right, you will see an alley. If you look at the arch in the alley, you can find the first Hidden Bottle. Head down this alley. At the end, on the ground, you can find the first Gold Bar. Go through the door just next to you and use your Welrod on the guard in the lobby. On the ground, next to some boxes by the desk, you can find another Gold Bar. Go up the stairs and use your Welrod on the second soldier. On the top floor, sitting on the set of shelves, you can find the third Gold Bar. Look out of the window at the statue of the man on his horse. On the ledge, halfway up from the base of it, you can find another Hidden Bottle to shoot. Head back down a level and go to the other end of the building. Here you have a nice vantage point to kill the rest of the enemies in this area. Try to time your shots to stay in stealth as much as possible.

There are a few snipers around, notably one at the far end of the street, on the top balcony and second floor. There is also another sniper on the roof of the building to the left. The rest of the enemies can be found in the street. Make your way outside and into the middle of the street. With the building you were just in behind you, head to the centre of the courtyard and behind the first bunker. Next to the door, you can find a Gold Bar. From that Gold Bar, head further down the courtyard, and off to the left. Behind a set of boxes at the bottom of the stairs, you can find another Gold Bar. From that location, head to the bottom-right end of the courtyard. Inside of the black car resting against the rubble, you can find a Gold Bar. From that car, turn around and head down to the opposite end of the street. Next to the barricade and some sandbags, you can find the seventh Gold Bar in this level. Follow the objective marker and enter the building, on the right side of the street. There may be a few enemies in here, so just be prepared to shoot them. Once they are dead, head up the stairs on the right side.

Next to the door on this side of the hall, you can find another Gold Bar. Follow the objective marker into the next room. Plant some Land Mines and Trip Mines in the hallways and on the staircase. We will need them later.

Go behind the staircase in this room. Next to the windows in the corner, you can find the ninth Gold Bar. Head up the staircase and look next to the hole on your left to find the final Gold Bar. Make your way to the objective marker. The target you need to rescue will arrive. The goal here is to snipe the Officer before he shoots the target. You need to be quick here. I suggest holding your breath and aiming your scope as quickly as possible. You will need to have the Officer’s head on the first notch below the middle of your scope.

Once you kill him, aim for the bottle on the wall, just next to them. This is the final collectible in the level. The goal from here on is to protect the target, killing enemies as he makes his way to you. Take out the couple of soldiers that arrived with the officer.

Once the target starts moving, look at the street below and snipe the enemies. He will then move into the large building next to you. Move vantage point to the blown out corner. Soldiers will start popping out of the various rooms. Firstly, they will come from the stairs on the right. Once your target reaches the first floor, they will poke their heads out of the rooms located just to the left. Finally, they will start shooting the target from the second floor. Once he reaches the street, soldiers will pop out of the door just next to where we picked up the Gold Bar by the boxes. Once that group is dead, make your way to the new vantage point and shoot the enemies that are below you, next to the entrance of the building you are in.

Next, head down to the entrance and talk with the man.

The next objective is to hold your position. This is where the mines and traps come in. If you have picked up any more, be sure to plant them in the hall before heading up to the vantage point.

Go prone and prepare to snipe the enemies that will arrive from the top of the street. If you start taking damage simply, wiggle backwards out of the line of fire. You should not have to worry about any enemies ambushing you from behind, so long as you have planted at least four traps in the hallway. Once everyone is dead, a short cutscene will play concluding the level.