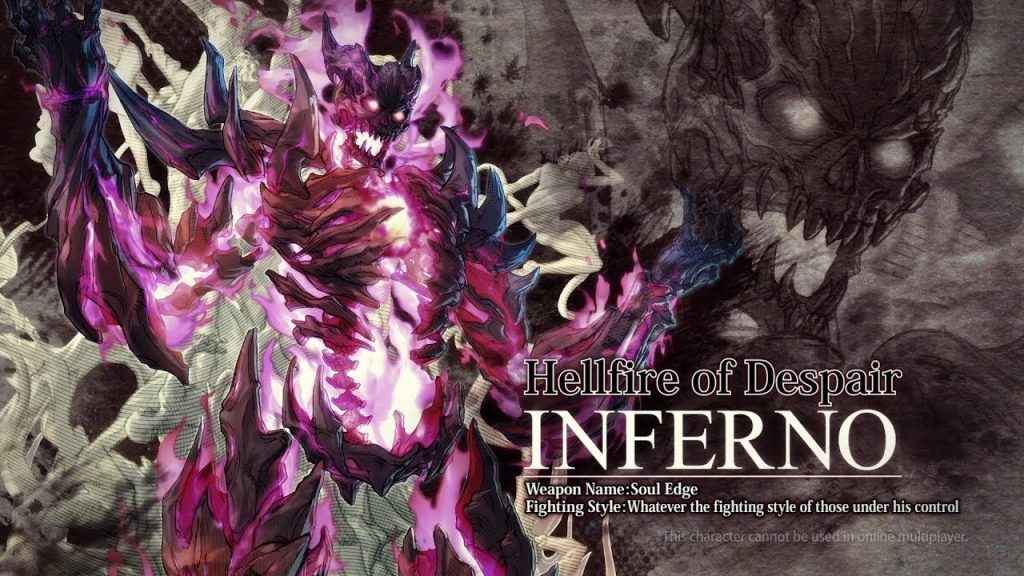 The “Hellfire of Despair” and living incarnation of the Soul Edge, Inferno will be a playable character in Soulcalibur VI, Bandai Namco has revealed.

At least he will be in the single player portions of the game.

Inferno is unavailable for selection in multiplayer which, to be honest, is probably for the best given the sheer overwhelming power he possesses.

The big bad of the original Soul Edge, the Soulcalibur VI version of Inferno should be intimately familiar to experienced players of the series.

His weapon is the titular Soul Edge in all its unwieldy, destructive, and vaguely unsettling glory (eyes don’t belong on a sword). While his fighting style is simply described as “whatever the fighting style of those under his control”.

A trait based on earlier versions of the character which, presumably, does exactly what it says on the tine – enable him to mimic and turn the abilities of his opponents against them.

Developed by Project Soul and published by Bandai Namco, Soulcalibur VI is the latest in the series of fighting games that debuted in arcades over two decades ago in 1995. Before eventually coming to the original PlayStation in 1996-97.

It’s scheduled to release on the PS4, Xbox One, and PC in exactly two weeks’ time on the 19th October. And, in the grand tradition of including famous characters from other IPs, features The Witcher’s Geralt of Rivia and Tekken’s Yoshimitsu this time around.

Fortunately, Geralt has a rather handy silver sword for dealing with demonic enemies.