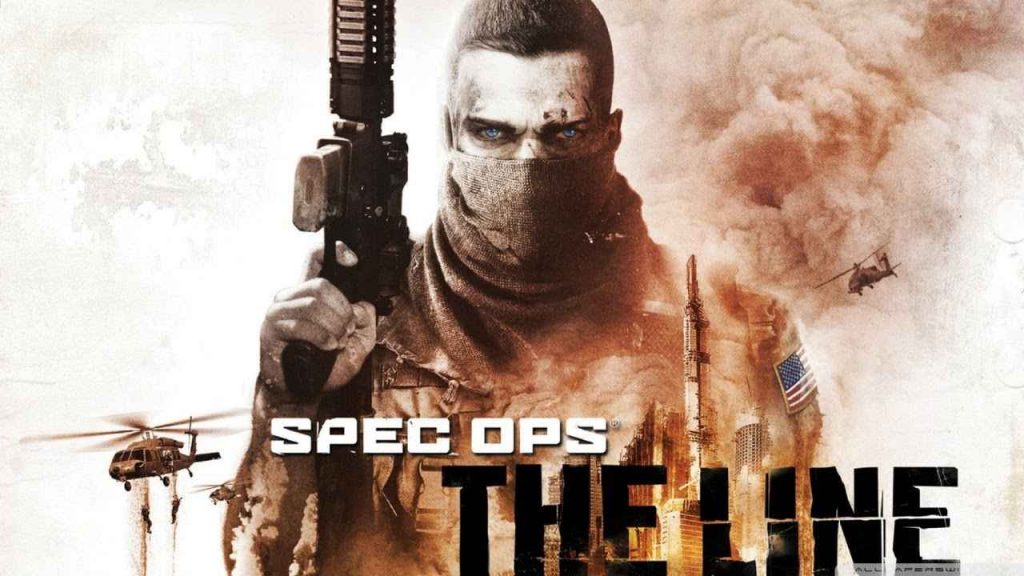 Spec Ops The Line is one of those under appreciated gems that found its way to my heart and mind, kind of by chance. I recall watching trailers and footage prior to its release but dismissed it as an average shooter that seemed destined to be forgotten amongst the often-cursed summer release window. Developed by Yager and published by 2K Games it instantly became a cult classic and secured a place in my top ten games of all time.

Unlike most Americans, I dread the thought of the Fourth of July. My dog suffers from extreme anxiety brought on by thunderstorms and fireworks. I vividly recall that in 2012 we were in the midst of a severe heat wave that was not only unbearable, it was dangerous. I had a few days off from work and what better way to spend hell week indoors than with a good video game. I went to GameStop in hopes of finding that perfect distraction to make isolation more bearable. I came home with Spec Ops The Line.

I find Jimi Hendrix’s rendition of The Star-Spangled Banner to be haunting and ominous. In retrospect, I’m not sure if that feeling came about before or after playing Spec Ops The Line. When you start the game the opening menu shows a tattered American flag flying upside down with the Hendrix anthem playing eerily in the background. The flag flying upside down indicates distress and suffering, it’s an early warning of what is to come.

Spec Ops The Line takes place in Dubai which has been ravished by a series of sandstorms. The wealthy of Dubai never admitted just how bad the conditions were and secretly evacuated leaving the Emiratis and migrant workers to fend for themselves. The 33rd infantry Battalion of the United States Army were passing through on their way home from Afghanistan when the storms hit and stayed behind to help despite orders to abandon Dubai and its refugees.

Spec Ops The Line was based on the literary classic Heart of Darkness by Joseph Conrad and the cinematic masterpiece it inspired, Apocalypse Now. Colonel John Konrad was the troubled leader of the “Damned 33rd” and as the storms intensified and resources became scarce, Konrad a highly decorated commander snapped, declared martial law and committed heinous war crimes on the civilians. Some soldiers from the 33rd tried to stage a coup against Konrad but failed and were exiled.

A Black Ops squad was sent to investigate and decided that the best plan was to have the locals form a rebellion to drive out the 33rd. This resulted in a truce of sorts and the 33rd stated that they were going to lead a caravan out of the city. The caravan never made it out, Dubai was declared a no-man’s-land with all travel to the city prohibited and the 33rd were accused of treason and disowned.

The city went silent for six months until a looped radio signal was heard, “This is colonel John Konrad, United States Army. Attempted evacuation of Dubai ended in complete failure. Death toll…too many.” This is where you come in, part of a covert three man Delta Force team sent to Dubai to investigate. The team is lead by your in game alter ego, Martin Walker voiced by Nolan North who served under Konrad in Afghanistan and thinks of him as a mentor and hero.

What takes place over the fifteen chapters of the game is one of the most harrowing tales of war that not only makes you question your decisions, but also feel guilt and remorse for the events they cause. One particular scene involving white phosphorous so haunted me that I can still close my eyes and see the tragic outcome that I was responsible for. Whereas Call of Duty, Battlefield, and most military shooters make you feel like a hero, Spec Ops The Line presents the player as the war criminal, it’s a fine line.

Call of Duty Modern Warfare 2’s infamous opening level No Russian was an attempt to show the horrors of innocent lives sacrificed in war, but it failed miserably and came across as nothing more than gratuitous violence. Spec Ops The Line perfectly conveys human loss as well as the psychological effects it has on the soldiers. The game also delivers a sympathetic portrait of post traumatic stress syndrome (PTSD) that so many of our military men and women are dealing with long after they leave the war zone.

The actual gameplay of Spec Ops The Line was less memorable, including the unnecessary addition of multiplayer. It was an underwhelming but entirely competent take on the third person cover based shooter, which is possibly why the game never achieved mass popularity. It’s also possible that the average gamer doesn’t want to be traumatized by the games they play.

This Is All Your Fault

I don’t expect we will ever see a sequel or a remaster of Spec Ops The Line, but the game is well worth seeking out. It is available on PlayStation Now, backwards compatible on Xbox One, and can often be found for cheap at Steam.

Spec Ops the Line will forever be in my head and inevitably intertwined with any Fourth Of July observances I may have. In 2019 the temperatures are nearly as unbearable as they were seven years ago and as I prepare for a stress filled extended weekend with the dog, Spec Ops The Line is just as relevant now as it was then.

Given the current political regime many of us Americans struggle to feel patriotic. Those of us that have never fought in a war, can never fully understand what our military goes through. Spec Ops The Line gave me an unsettling look into the mind of a soldier as well as a deeper respect for our military. It’s unfortunate that freedom often comes at the cost of humanity, but I’m thankful these brave souls are there if we need them.

Have a safe and happy Fourth of July!