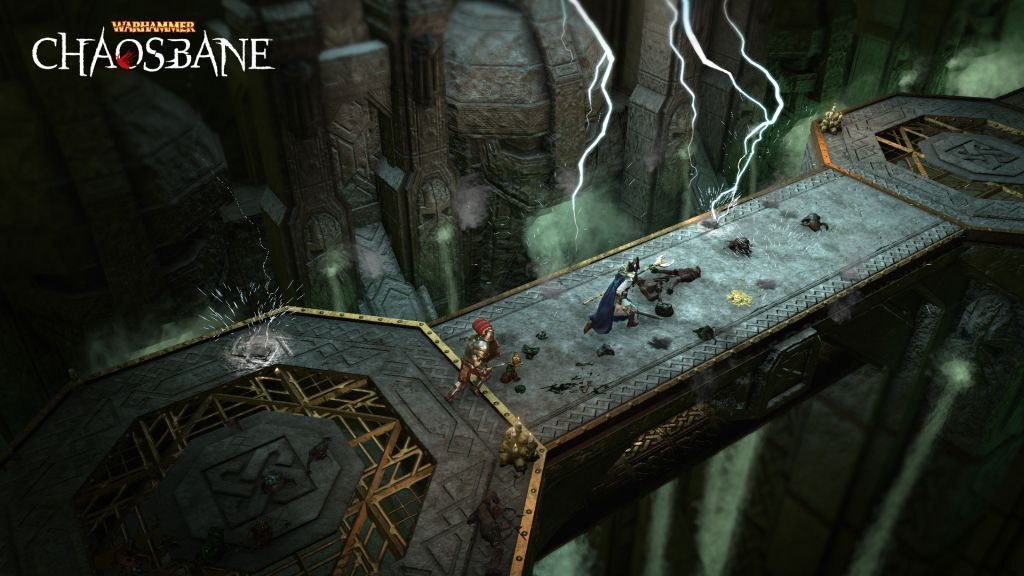 Warhammer: Chaosbane is an action-packed and atmospheric Diablo-style dungeon crawler set in the Warhammer Fantasy Battles’ universe. While some details are being kept under wraps, PlayStation Universe was given the opportunity to play through the first several hours of Warhammer: Chaosbane’s campaign. And while I was left with a ton of questions, I had a great time stomping around the sewers of the initial hub city, and I’m deeply excited to dive back into Chaosbane to continue the quest.

With Warhammer: Chaosbane steadily marching towards a June release, publisher Bigben and developer Eko Software have been gearing up a number of betas in March and April, which will give players who have pre-ordered the game a chance to take it for a spin. The first of these betas is active today, and runs through March 13th at 9:00 AM GMT.

“During this beta, players will be able to develop their characters to level 20, explore the sewers of Nuln, and fight Nurgle demons. The beta can be played cooperatively with up to 4 players, either locally or online. Two characters will be available: Konrad, the Imperial soldier, and Elontir, the High-Elf Mage,” says publisher Bigben Software.

Of course, these betas also allow the dev team to stress-test their servers. Given the condition that a lot of online games have released in lately, this is much appreciated.

Chaosbane’s storyline is appropriate to the genre

As the access that PSU had to Warhammer: Chaosbane seems very much in line with what closed beta players will experience, we have a pretty good idea of what to expect. The beta includes a fairly meaty chunk of the game, and while you might be able to blaze through it in a couple of hours, I easily spent four or five hours leisurely poking at it.

While beta players only have access to the soldier and mage characters, other beginning characters that have been revealed include a wood elf rogue and a dwarf berserker. Each of the primary characters in Warhammer Chaosbane is given their own origin storyline, which is communicated via a series of lightly animated cut scenes at the beginning of the game. Of course in a game like this, these origins are only set dressing, but they were entertaining enough that I didn’t skip past them.

I chose to play as the high-elf mage character, and was delighted to learn that while he was as self-righteous and snotty as I expected, he was also a bit of an outcast. Tossed out of the mage conclave for accidentally doing some magic-related murders, he allows himself to be swept up into the ongoing conflict raging nearby in an attempt to make a name for himself and be readmitted to the fold.

After the intro, the story serves as the mechanism that drives the player from mission to mission, which is absolutely fine. Missions are just long enough to allow you to grab some sweet loot, and then they end to allow players time back in town to sell junk and visit with local authorities. Browse a couple of paragraphs with skippable voice-over, and off you go to continue destroying monsters with fire. Short, sweet, and to the point.

While this was my first experience with the Warhammer Universe (I have no idea how I’ve managed to miss it so far, but its true), I was instantly at home with the dark fantasy tropes on display. I chuckled merrily to myself when I approached the local leader for my first mission, and he basically said “We’re going to need you to go down to investigate the sewers.” If I had a dime for every fantasy sewer I’ve cleansed…let’s just say that I’ve left a lot of dead digital rats in my wake.

What I didn’t realize at the beginning of the game was that going forward for the remainder of the beta, every single mission I played would begin with me “going down to investigate the sewers”. While we were only given access to the first act of the game – so there is likely a lot of variety later in the game – players should get ready to spend a lot of time marching through the same sewer templates over and over again.

However, each mission has its own end goals and story – and enemies become progressively more difficult – which serves to keep things interesting as you play through the game’s opening hours. There’s so much other stuff going on that I didn’t mind being trapped in the sewers for most of the beta’s duration.

While what we saw will probably end up representing only a small fraction of the total number of enemies in the game, the bad guys we did see were impressive. Beyond the swarming Nurglings, other common enemies included Bloodletters (tank-like zombie-looking guys), poison spewing witch-mages, and ChaosSpawn – wild Lovecraftian tentacle monsters that explode in a burst of poison when defeated. Amusingly, the Nurglings (the cannon-fodder enemies that are there to provide kindling for your AOE nukes) sometimes assemble themselves into a rat-ball type configuration and come whirling though the battle causing chaos, like some sort of tiny demonic Voltron.

The portion of Warhammer: Chaosbane that I played concluded with a boss battle against a grotesque, slovenly demi-god thing, that – surprisingly – killed me on my first attempt to fight him. As I had basically leveled up to the point where I was a fiery wrecking ball on legs, I was a little stunned when the big bad took me out. However, with a little bit of study and pattern-recognition, I was able to take him down on my second attempt.

WarHammer: Chaosbane is all about character development

As the beta progressed, it became clear that the ways to progress player characters are myriad.

The most obvious and immediate way to build up your battle prowess is through the acquisition and equipping of loot. While I only encountered three levels of loot in the beta (grey, blue, and gold), there are likely rarer tiers of gear available in the full game. By the time the beta ended, I was decked out in almost exclusively gold level gear. It felt as though I were just scratching the surface.

It should be noted that gear alters your in-game appearance, which is an always welcome touch. While a lot of pieces of loot share the same modelling, there is still enough variety that your character will be changing appearance fairly regularly.

Gear impacts three primary stats; attack, defense, and utility. As I had no idea what “utility” did, nor did I understand how it worked in conjunction with the other stats, I just did my best to keep it moving upwards without worrying about it too much.

The real meat of the progression system comes in the skill tree. The way Warhammer: Chaosbane has structured its skill tree is instantly recognizable, but with one twist that I really enjoyed.

Playing as the high elf mage, I started with a basic fireball. This serves as your base/spam power, which you will be jamming on constantly while making your way through the endless sewer. Every enemy you hit with the fireball provides energy (mana), which provides power to fuel your more advanced goodies. As it takes no energy to shoot the fireball (and it does decent damage), it is a good idea to keep the fire flying at all times.

Before long, you gain five or six other cool powers, including some nice AOE attacks (and the ability to spit fire in a spout, like a lunatic high-elf-dragon). As levels progress, you gain new powers, and advanced versions of each power become available. Of course, you don’t gain enough skill points to advance every power, so you have to pick and choose which to take a chance on.

This is where things in Warhammer: Chaosbane get cool. Skill points are flexible, meaning that at any moment, you can pop into the menu, pull some points away from one power, and pop them into another power. Disappointed in that advanced hailstorm? Yank those points out of there and invest them somewhere else (in the AOE tornadoes, perhaps?). You can literally re-spec any time, on the fly.

While I was not able to get into a multiplayer game during my play test, I could quickly see how this could benefit players that enjoy both solo play and playing with friends. With a quick reassignment of skill points, my mage character could quickly switch from a solo/cannon build to a more supportive/healing/energy-providing build. This offers some flexibility in choice, and removes that FOMO anxiety that comes from investing skill points.

Late in the beta, players also get access to another skill-tree-like customization option. Resembling Final Fantasy X’s Sphere Grid, this UI allows players to invest gems that are picked up as loot into small stat boosts, which will eventually lead to full-on perks. Much like the skill tree, players are able to remove all of their invested points and reinvest to try different paths. It is unclear whether this ability to re-spec will carry over into the full game, but we are surely hoping it does.

A lot left to discover

I greatly enjoyed my time with Warhammer: Chaosbane, and I am excited to learn more about the game. I was left with all sorts of questions that may or may not be answered in the lead up to Chaosbane’s June release.

Peeking behind the curtain of a game under development is always fun, and fans that pre-order the game are now able to get the same access we had. If you are a Warhammer fan, or a fan of Diablo-style dungeon crawlers, then we can confidently say that Chaosbane will definitely be worth your time. There aren’t that many games of this sort that carry this high level of polish.

Take a look now, and come back to PSU in June for a full review.