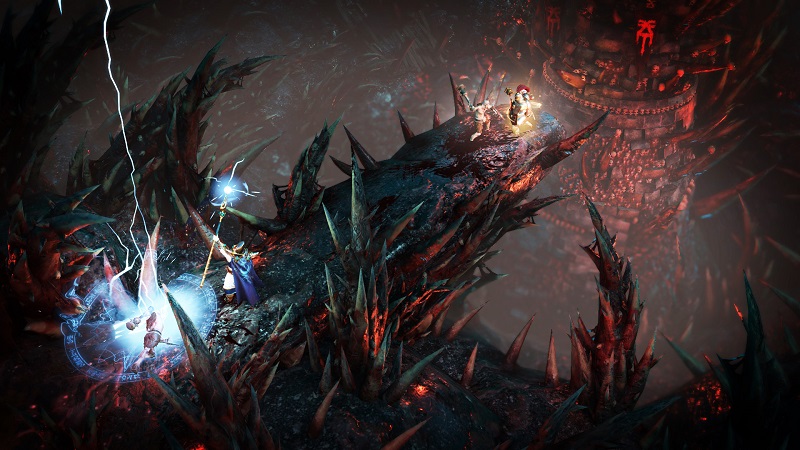 Warhammer: Chaosbane Slayer Edition PS5 Review. In retrospect, separated by its current generation release by nearly a year and a half, Warhammer: Chaosbane seems like an odd choice to port to PlayStation 5 – even though Sony’s latest console effort has a nice Diablo-shaped hole for the Eko Software developed effort to fit into.

An Entertaining If Unambitious Dungeon Crawler Gets A Fistful Of Enhancements

For those of you that haven’t read our original review of Warhammer: Chaosbane (you can sail on over here to get the full lowdown), Warhammer: Chaosbane is a top down, Diablo style dungeon crawler which takes place against the backdrop of the Warhammer fantasy setting. A perfect match, you might say.

As it is, Warhammer: Chaosbane is a perfectly serviceable, if unsurprising and relatively unambitious action RPG which manages to scratch that Diablo itch well enough but doesn’t succeed in doing much beyond that. Once you’ve chosen your hero from a selection of half a dozen monster mashers that include Dwarven Slayers, High Elf Wizards and more besides you can get cracking on with, well, cracking (Chaos) skulls.

Once in, Warhammer: Chaosbane allows players to go at it alone, locally with friends or join up with up to four folks online to smash their way through the forces of Chaos – so far, so Warhammer then. That said, fans of Games Workshop’s sprawling tactical fantasy world will recognise many of the heroes and monsters in the game, with the various disciples of Nurgle, the Undead and the forces of the Empire, Wood Elves and so on all being immediately recognisable and a perfect match to their table top equivalents.

Broken into multiple chapters, the story mode of Warhammer: Chaosbane is your usual fantasy fare – albeit with a ton of grind and fairly predictable objectives. Usually involving you killing something or collecting an item before heading back to the quest giver, it’s fair to say that they hardly capture the imagination. Likewise, an array of ancillary game modes, such as the Boss Rush and skirmish style Expedition game types also do little to suggest that Warhammer: Chaosbane is doing much to push the genre forward.

Nonetheless, while Warhammer: Chaosbane might not push the envelope in any significant ways, there is a compelling, almost workmanlike quality to its fundamental hack and slash gameplay which allows it to scratch that aforementioned Diablo itch. Quite simply, laying waste to legions of Chaos and bad folk is satisfying, yet grindy.

Foes often attack you in their tens and can be dispatched easily enough, while certain larger enemies and boss characters must be given a more singular focus in order for them to be defeated.

In actuality, while the grind of Warhammer: Chaosbane can be numbing at times, the sheer creative latitude that exists for theorycraft and build development really is quite impressive, anchored by various abilities, skills, divine gifts and loot to be used – all of which mesh in with the class that you’ve chosen which includes the usual tank, DPS and support role archetypes.

Again, nothing terribly surprising but Warhammer: Chaosbane is, like many of its dungeon crawling, hack and slash genre contemporaries the sort of affair that is best enjoyed with friends all the same.

Like many current generation re-releases on PS5, Warhammer: Chaosbane is hardly lacking in content. With its ‘Slayer Edition’ suffix letting the cat out of the bag somewhat in this regard, Warhammer: Chaosbane includes all of the expansion and DLC content that was released for the base game since it came out in May last year.

And it’s a fair amount of worthwhile extra stuff to get stuck into too. From additional expansion campaigns to all new characters such as the rather cool Demon Hunter hero, Warhammer: Chaosbane Slayer Edition is certainly one dungeon crawler effort that you can pile potentially hundreds of hours into; assuming of course you don’t succumb to the relative monotony of its grind.

Of course this being something of all-singing, all-dancing PlayStation 5 take on a previously released PlayStation 4 title, there are some technical improvements to be enjoyed here too.

Straight off the bat you’re getting 4K resolution visuals that clap along at a smooth 60 frames per second. Good, right? Yep, it certainly is. Less than good however is the very occasional screen tearing that appears, acting as a timely (though depressing) reminder that Warhammer: Chaosbane Slayer Edition needed a little more TLC for its PlayStation 5 debut.

Further afield, loading times are massively cutdown, resulting in near instantaneous transitions between internal and external environments while loading screens between acts and quests are cut down to between three and five seconds – a massive improvement and one that succeeds in getting the player into the game as soon as possible.

Sadly though, there are no other special PlayStation 5 customisations going on here. The implementation of DualSense functionality feels perfunctory at best with just a cursory sort of haptic feedback when you attack enemies and find yourself absorbing blows in turn and that’s pretty much it.

Warhammer: Chaosbane Slayer Edition fills a very specific niche on PlayStation 5 is in so far as it’s both a Warhammer game and one that takes in a dungeon crawling style of play. Filled with content, quests to complete and monsters to slay, Warhammer: Chaosbane can be fun if you’ve friends to experience it with and can tolerate the grind.

Otherwise, the lack of shiny new PlayStation 5 bespoke features (beyond the usual technical upgrades) and the fact that it strives to be little more than a pack-in of all the additional content for what was already a middling hack and slash affair, makes Warhammer: Chaosbane Slayer Edition far less of an essential purchase than it otherwise might be.

An all-encompassing edition of Warhammer's latest foray into Diablo style dungeon crawling, Warhammer: Chaosbane Slayer Edition struggles to stand out with its grindy gameplay and poor use of the DualSense controller. That said, there is sufficient depth in its character build creation and near endless quest lines that those who can withstand its less agreeable aspects will find much to tide them over.