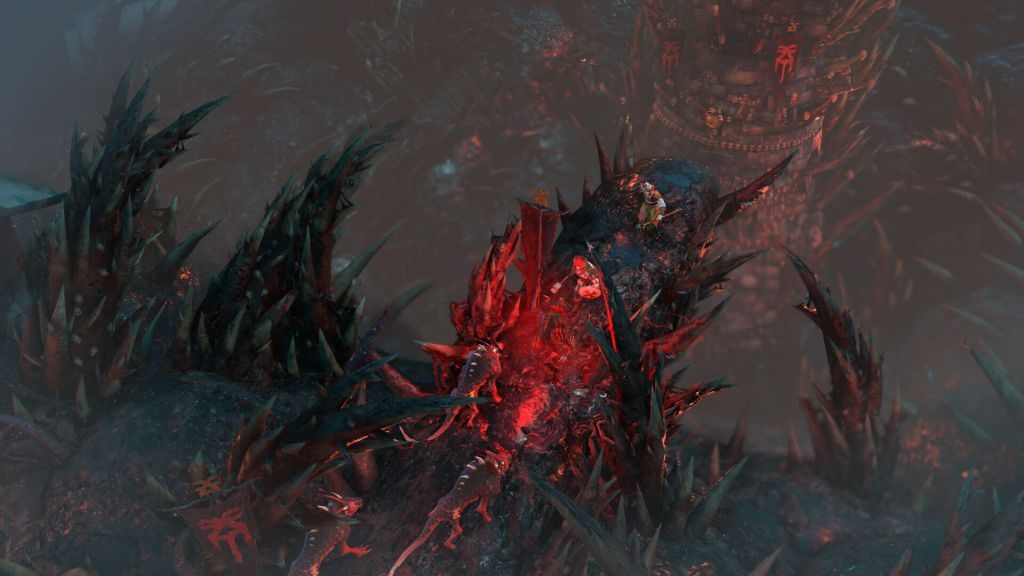 BIGBEN and EKO Software’s Warhammer Chaosbane wears its inspirations on its sleeve. There is no question whatsoever that the team behind Chaosbane took a long, hard look at Diablo 3 – studying the things they enjoyed and determining what tweaks they could add to give their game its own identity. The end result is a mixed bag – a very solid foundation for further installments that feels as though some of those tweaks should be un-tweaked.

Dungeon-crawling and loot-gathering are inherently fun, and Warhammer Chaosbane hits all the notes needed to keep the action flowing, but long time fans of the genre may find themselves longing for a bit more variety as the game wears on.

Chaosbane Does A Lot With A Little

Starting Chaosbane, players are able to choose between four archetypical fantasy characters – a relatively small stable for a game of this type. There are a snooty high-elf wizard, a dwarf berserker, a ranger, and a general soldier-type. While this selection is somewhat limited, each of these characters has an extensive set of both active and passive skills to learn, enabling any number of specialized builds.

Warhammer Chaosbane is broken up into several chapters, each of which contains twelve or so missions, culminating in a fairly complex boss fight. In between missions, the player is shuttled back to a hub area to sell off spare loot, watch a bit of story-based dialogue, and then head back out into the fray. The hub areas are nicely drawn, but don’t offer much to do beyond chatting with the local leader and unloading your junk.

Missions are played out in beautifully rendered environments – but here is where some of the cracks in Chaosbane’s armor start appearing. Each hub world has an accompanying specific mission environment. The first hub sends you into the sewers, the second into the cursed, burning city of Praag, the third into a snowy forest, and so on.

Each of these environments has a number of templated background tiles, which are shuffled and re-shuffled for each mission. Once you have gone into the sewers for the first few missions, you have seen all of the tiles several times in several configurations. Then the game sends you into the sewers seven or eight more times, fighting your way through the same enemies in the same environment, and picking up a lot of similar loot.

It is still fun to wade into an ocean of bad guys, firing off AOE attacks and wiping out entire populations in seconds. Just don’t expect new levels of visual splendor as you do so. The levels are appropriately grimdark – in keeping with the franchise – but the gloom does become a bit relentless after some time. And the fact that they are entering a sewer remix for the umpteenth time might have players rolling their eyes a bit.

Skills Are Restrictive – But Easy To Tweak

I chose to go with the elf mage, leaning heavily on his fire-based skills and sinking most of my skill points into developing those attacks. Each character has a special ability mapped to the right stick, and the mage has the ability to direct his spells. While the AI help out a bit, directing your projectiles if you don’t want to bother, you will find yourself infinitely more effective if you take full advantage of your abilities.

My favorite combo was to spam enemies with a basic fire attack to kite them into an open area, then spin quickly in a circle, unleashing my fire breath to kill scores of baddies in seconds. Of course, the fact that I did this endlessly prevented me from using some of my other more advanced skills, but it just works so darn well.

And that’s the rub with the skills in Warhammer Chaosbane. The game forces you to choose where to sink your acquired skill points in such specialized ways that it starts to feel restrictive.

Here’s how it works: each character has a number of ability slots. There are six slots for active abilities, which are mapped to various buttons on the DualShock. There are three slots for passive abilities – buffs and such. Skill points are doled out each time your character pops a level. Things start out just fine, but before long you will start feeling the squeeze. For most of the game, you are sorely low on skill points, to the point where I always had several active ability slots left completely empty in order to prioritize my points into buffs.

To be fair, the skill points can be allocated and re-allocated at will, giving the player the ability to change things around and try out different builds on the fly. Just a tap on the touchpad will freeze the on-screen action and let you fiddle around with your build. But once you start getting advanced versions of your abilities, they become so expensive that you will sometimes be forced to ignore them in favor of weaker versions. This did not sit well with me.

In other games of this type, you of course have to pick and choose which abilities to focus on. But I don’t recall ever feeling so kneecapped by a system offering me multiple things that I need for a build, only to find that I can’t afford to use them without using an inferior version of something else. It feels like the limited slots should be enough to force players into making build decisions, and the skill points add a second, needlessly limiting layer of complication to building your character.

I was also somewhat underwhelmed by the loot system – at least what I saw of it. Playing on normal difficulty, I saw three levels of loot – common whites, rarer blues, and very rare golds. I understand that other levels of loot are hidden behind higher, unlockable difficulty levels. I dipped into higher difficulties occasionally to see what I could see. But Warhammer Chaosbane never once plopped a rarer piece of loot onto the ground for me to get excited about.

As a result, the increases in ability when switching out loot feel like a very gradual curve. I never experienced a major pop in power level as the result of finding a sweet legendary tucked among the trash.

The game eventually unlocks the ability to sink “fragments” (which you pick up off of the ground after almost every battle) into enhancing loot to make it stronger, but for most of the game I didn’t want to waste my fragments enhancing lower level loot that I knew would be outdated in an hour or two.

As it stands, the endgame doesn’t offer much in the way of variety yet. To be clear, BIGBEN and EKO Software have announced several updated (both free and paid) that will extend the endgame and enhance the experience. But for now, players are able to restart the game with a new character, keeping all of their accumulated stuff (money, fragments and loot).

Players can also go on Expeditions, which are essentially mini-missions that take place in further remixed versions of the environments they have already visited 20 times. Boss Rush mode allows you to jump directly to boss battles, in order to quickly earn higher end loot and test out various builds. And there is a relic-hunt mode that gives players access to a special dungeon – also in the pursuit of higher end loot.

For the most part, the current endgame feels like going to an amusement park for the fifth day in a row. There is a definite feeling of “I already rode all of these rides and saw all of these shows, only now I’m doing it while wearing a new hat”.

I Am Being Way Too Harsh

I have just burned 1000 words complaining about Warhammer Chaosbane, and elaborating on my various complaints about it. This is the part where I backpedal a little bit, because I really do like this game. Despite all of my frustrations, I did enjoy my time with Chaosbane.

The core combat is smooth and fun, the animations look great, the multiplayer is easy to use, there is couch co-op (hooray!), the two skill trees are complicated and deep, the boss fights are complex and challenging, and the story (what there is of it) never gets in the way of the bloodletting. Warhammer Chaosbane is a fun game to play.

I have to keep reminding myself that this is a brand new game. To compare it to something like Diablo 3, which has had umpteen patches, DLCs and balance changes is utterly unfair. As I said at the beginning of this review, Warhammer Chaosbane provides very solid bedrock on which the developers can build.

As it stands, I can recommend this game to fans of the ARPG genre. But all comers must be ready to put their expectations in check a little bit, and give this game time to adapt and grow. Rome wasn’t built in a day, and the same goes for Warhammer Chaosbane.

Warhammer Chaosbane is a great start to a new ARPG, but it definitely feels like a “start”. The skill system feels too restrictive, the loot drops come too slow, and the environments and enemies are repetitive. That said, the game still manages to be fun to play, but more development is needed to make Chaosbane one for the ages.