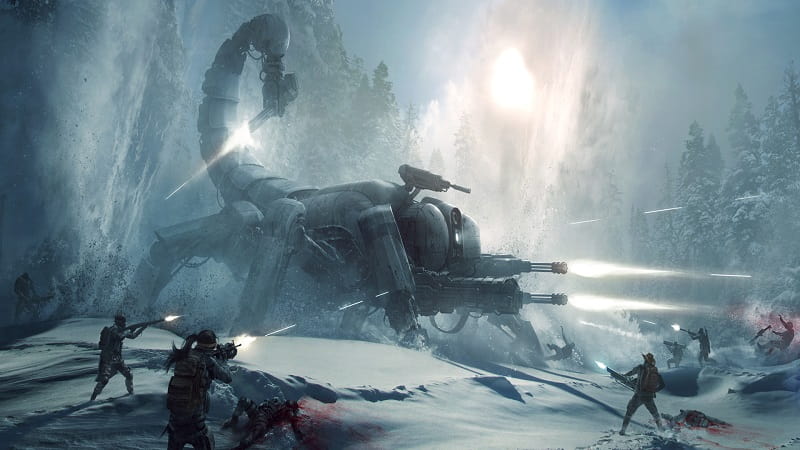 One of the more promising RPGs to come along this year, Wasteland 3 looks set to deftly intertwine squad based combat, non-linear story progression and the frosty tundra of post-apocalyptic Colorado in a way that looks wholly compelling. Eager to know more, we spoke with inXile Entertainment Wasteland 3 game director, Tim Campbell, about what we can expect from its latest grand effort.

PSU: One of the most eye-opening aspects of Wasteland 3 is its newly frosted Colorado setting – other than offering up a change in environment, does the shift to a colder climate meaningfully impact on the gameplay in any way?

Tim Campbell: Colorado’s nuclear winter serves as a fresh backdrop that enables us to tell new stories and explore gameplay ideas that we otherwise wouldn’t be able to. For example, some of the game’s conflicts center around the control of fuel sources, which Colorado’s inhabitants need in order to generate heat and survive in their frozen surroundings.

Similarly, Colorado’s harsh environment forces players to acquire a heavy-duty Kodiak rig early on in the game to serve as their mobile-home and shelter. Almost every aspect of this lumbering vehicle is customizable, from its armor and weaponry to the chassis and engine, and players are even able to bring it into many combats as a powerful weapon that can turn the tide of battle.

PSU: Tell me how the new Ranger Base works – is it just a hub within the game world of Wasteland 3, or does it offer more?

Tim Campbell: The Ranger HQ is your safe space in Wasteland 3. You take command of it early on, and from there you can expand and explore it throughout the game experience. It’s a place you come back to over and over in order to customize your squad, fix up the Kodiak, and interact with the people there and progress some key stories and moments.

Often, people you meet and rescue along the way can be recruited to join you back in Ranger HQ, offering additional help and special resources. In this way, your choice of who to help and who to fight throughout the game has a direct impact on how your headquarters develops and what capabilities it provides.

PSU: We’re super happy to see that the robust turn-based combat from the previous game has returned – what improvements have you made to the system?

Tim Campbell: We’ve made a host of new improvements that Wasteland fans will appreciate! Probably the most obvious is that we’ve shifted from a per-character initiative system to a party-based combat order. That enables players to move all their Rangers during the same turn in order to perform more nuanced, multi-character maneuvers. We’ve also overhauled everything from our armor system to our character progression and added a huge amount of new weapons, abilities, and usable items in order to make combat more dynamic and increase the tactical options available to players.

PSU: What work has been done in regards to weapon balancing? For example, in Wasteland 2 there was usually very little compelling reason to venture outside of assault rifles and energy weapons because they were hugely over-powerful.

Tim Campbell: We’ve spent a lot of time focusing on combat balance with the goal of providing players with a greater variety of gameplay choices and playstyles. We have a much larger design team this time around to improve, test, and iterate on combat—and have integrated many more systems and mechanics. We’re keenly aware of the challenges in Wasteland 2, and think players are going to be really happy with how we’ve expanded and improved upon it. Creating a build that’s super powerful is awesome, but the trick and challenge for us is making sure there are many options that are similarly powerful and fun. It’s about choice – and in an RPG, choice is king.

PSU: In terms of side mission content, how much of it is tied directly into the companions that you meet during the game?

Tim Campbell: We have a great variety of companions that can be recruited in Wasteland 3—each offering their own unique twist in terms of combat, personality, and narrative impact. We’ve tried to make each one different and not force them into the same cookie-cutter mold.

Some are critical to their own narrative quest lines, others impact literally thousands of lines of dialog, but each one provides their own memorable moments and flavor to help players personalize their experience. Of course if players are looking for more custom combat and gameplay mechanics—or to offset their current squad weaknesses—there’s a full customizable recruitment feature.

PSU: Wasteland 2 went pretty heavy on the pop culture references – does Wasteland 3 pull back on this approach a bit or double down?

Tim Campbell: We definitely have our fun and have included a lot of pop-culture references in Wasteland 3, but we also try to make sure that our humor is either really dark or is couched in a bleak setting. This has been true of the series since the original 1988 Wasteland, where one of the first characters you encounter is “Harry the Bunny Master.”

Since then, the Wasteland series has always had a bit of oddity and fun to it – but we always try to have it make sense in the context and dark tone of the rest of the game. Keep in mind that in the Wasteland universe, society collapsed in the 1990’s – leaving the 80’s and 90’s as the source of most of the ancient “artifacts and relics” that players will discover. What’s pop-culture to us are just remnants of the old world to the characters in Wasteland 3.

PSU: Wasteland 3 apparently uses a new dialog system – how does this work and what improvements does it bring over what we experienced in Wasteland 2 where there were comparatively fewer speech options and related skills?

Tim Campbell: inXile of course shares a lot of DNA with Obsidian, and we’ve been fortunate enough to use the same dialogue tool that they developed for The Outer Worlds. It’s helped us to open up the game to a branching dialogue system instead of the old-school keyword based one in Wasteland 2. It also means we now have a far deeper, more complex, and branching story for players to experience.

Skill checks for dialog options are now a much bigger deal in Wasteland 3. Not only does your rank in speech skills like Kiss Ass or Hard Ass affect entire sections of the story and game, but we’ve made a point to include a lot of conversation options that are likewise gated by non-conversation skills. The Medicine skill might enable you to provide first aid guidance to a character in need, for example, or the Leadership skill might enable you to rally someone in desperate circumstances. No matter how you build your party, there will be conversations options that open up based on your choices.

PSU: Wasteland 2 was something of a hefty effort – how long would you expect a reasonably deep single playthrough of Wasteland 3 to take?

Tim Campbell: We know that most people didn’t make it to California in Wasteland 2, and so right from the beginning of the project we’ve been focused on keeping the pace up, keeping people engaged, and creating a more focused and deep experience. That said, we’re still making an extremely big RPG—there’s just no way for us to tell the stories we want to without making an experience that can sprawl in any direction depending on player choices. We estimate that Wasteland 3 is somewhere around 50-60 hours for an average playthrough, but there’s also a lot of extra stuff in there for completionists to find.

PSU: We’re loving the idea of online cooperative multiplayer in Wasteland 3 – how will that work in terms of loot, play states and so on?

Tim Campbell: We’re pretty excited about it too and have already had a lot of fun playing Wasteland 3 cooperatively. In particular, turn-based combat with a co-op partner provides a lot of fun and interesting strategic situations for players to work through together. Keep in mind that we don’t constrain the game at all in this mode or put training wheels on. It’s literally the same full game experience as you can explore in single-player, and we let you do almost anything you want and then make sure the world reacts to that.

Of course, it’s more than twice as complex for us to make sure that everything works smoothly for two people sharing the world. We’re spending a lot of time smoothing out the rough edges of the cooperative experience, from making sure that elements like looting, trading, and conversations all feel good to ensuring that players can host, join, and interact smoothly. Players are able to start a game together, then split off on into their own single-player branches, and later come back together to pick up and continue from one of the player’s game states if they want.

Tim Campbell: We have some ideas and areas that didn’t make the cut that we’re thinking about circling back to for DLC, but haven’t started developing anything yet. We’re entirely focused on getting the core game polished and in people’s hands as soon as possible.

PSU: Wasteland 2 was ultimately as much a love letter to the first Wasteland as it was to the isometric Fallout games that followed it – is Wasteland 3 inspired by any other genre classics, or does it continue that same design throughline that defined its predecessor?

Tim Campbell: We take inspiration from all over, and especially from turn-based RPGs which have been enjoying a resurgence in the past few years (hopefully inXile has played a small part in that).

At the end of the day, we love this type of game, we play a lot of them, and those experiences are definitely going to circle back and influence our work one way or another, but I’d say this game is absolutely a love letter to our fans. The backers that made this project a reality, long time Wasteland fans, and even fans that don’t know they’re fans yet. We’re focused on what we love about this franchise and genre, and are working hard to deliver a deep, reactive RPG that our players will be able to enjoy for years to come.

PSU: Thank you for your time Tim!