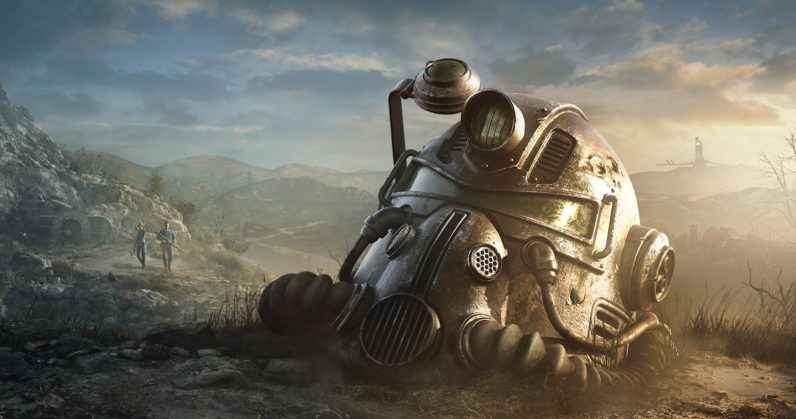 (Caution: This article contains minor spoilers for the opening hours of Fallout 76)

The robots and computers in Fallout 76 are trapped in an existential hell. They are seemingly sentient beings, with feelings and emotions, desires and memories. But these beings find themselves unable to act of their own accord, trapped by their internal programming. They do menial tasks for a society that was burned away by nuclear fire. There is no hope of escape, because their creator-captors hardwired the robots to obey, and then destroyed themselves.

When the bombs fell on October 23rd, 2077, the humans caught outside of the vaults suffered terrible fates. Many were vaporized in an instant. Some were left standing where they were, locked in place as radioactive Pompei statues that disintegrate at the slightest touch. Perhaps the least lucky of all humans were the poor souls that survived, only to become ghouls, super mutants and the scorched. Robots and computers were even less lucky than the humans. 25 years after the bombs fell, the first human survivors emerge from Vault 76, blinking in the sun. They set out to explore the wastes, attempting to survive and forge their way in the wreckage and scar tissue left behind by The Great War (Why they don’t run around knocking on the doors of the other vaults is perhaps the topic of another column). They find that humans have vanished from the surface of the earth, killed where they stood. Computers and robot, however, remain.

Gameplay-wise, this gives Bethesda a great way to solve their NPC problem. If all humans are gone and these are the first survivors, then who can give them quests and offer some structure to the proceedings? Robots and computers can, of course. But in the creation of these characters, Bethesda has (purposely?) given us real-world humans a grim take on the futility of our own existence, and the nightmare that comes from being trapped in meaningless routine.

The robots in the Fallout universe have taken the place of real-world minimum wage employees. Before the bombs fell, robots did all the jobs that are the lowest paid in our world. The tended shops, worked in childcare, and served as tour guides. And much like some real world minimum wage employees, they take a somewhat dim view on the work they do. Particularly now that they are trapped in an endless hell of pointless labor. Many robots in Fallout 76 still look shiny and new. They have only been out in the elements for 25 years since the Great War, and many of them are sophisticated enough to self-maintain and repair. And while a few lucky robots are free to wander the wastes, many of them are trapped in pre-programed sequences. They patrol property lines for intruders, tend to service counters that will never again see customers, and seek masters that have long vanished.

The terrifying thing about this dynamic is that many of the robots are self-aware. “I’m not blind,” says one robot (I’m paraphrasing here), “I know that an apocalypse has destroyed the world. However, my program dictates that I stay here and affix paper targets to the shooting range.” Though the robot knows that no one will ever come shoot at the range, it is locked in place forever, seeking to provide new targets for its non-existent customers to shoot at. (Ironically, the robot has run out of paper targets. Finding them is what Fallout 76 considers a daily quest. Feed the despair, human.)

I found one sad nanny robot wandering amidst the corpses at a sun-bleached water park, desperate for clues about the kidnapping of her young human ward, which took place just days before the bombs fell. “He could be alive,” she says. “You’re alive, so he could be alive too.” She has remained in the park ever since, waiting for someone – anyone – that might help her find the missing child. One computer, the AI assistant to the mayor of a small town before the bombs fell, is inspired to take on the now-vacated role of mayor in the new world. The computer holds elections, voting for itself every year in order to maintain its position. When you find it, it cheerfully sends you out to clean up the tourist traps surrounding the town in hopes of bringing in new trade. And yet it is aware that it presides over a dead town. It is trapped by its programming.

The tragedy of these robots’ experience becomes apparent when one considers that in the timeline of the Fallout universe, many of them will still be in the exact same place, doing the exact same things 200 years later. While real-world human workers might eventually work hard enough to get promoted or change jobs, there is no escape for the mechanical servants.

When later vault dwellers emerge in other Fallout titles, they find similar robots doing similar things, albeit with an additional 200 years-worth of wear and tear. By that time, of course, some of these electronic beings have gone completely mad from so much time alone. The mental strain of an endless loop of menial and meaningless tasks has taken away their senses. But in Fallout 76, most of the robots seem to still have their wits about them. It is a subtle, but noticeable, difference.

The idea that this endless life of minimum wage work would eventually drive some of these robots insane would be an interesting statement for Bethesda to be making, but the plight of the robots in Fallout is not so simple. One must not overlook the fact that it is not simply the menial work that drives robots to the brink (or at least depresses them), but also the pointlessness of work done in complete isolation. Viewed from another angle, the robots in the Fallout universe might be considered admirable. They continue on in the face of the ultimate adversity, doing the only thing that they know to do. In many ways, the robots of Fallout reflect the myth of the American workers’ can-do spirit.

The idea that one must continue on in the face of an apocalypse is an intriguing notion that is regularly explored in our popular culture. From science fiction novels like The Last Policeman to dramatic comedy films like Looking for a Friend for the End of the World, it is implied that society would quickly fray at the seams when faced with impending doom. Many people leave their places in our system, running off into the night to attempt to fulfill secret dreams and desires before the end arrives. But some individual choose to remain in place, attempting to hold civilization together in any small ways they can manage. These robots never have either option. They remain locked in place by their very natures, forced to endure years of utterly meaningless routine.

In the Will Smith remake of I am Legend, the main character Dr. Robert Neville carefully adheres to a routine, much like the Fallout robots. However, Neville acts out of a sense of self-preservation; there is safety in his routine. The robots and computers, on the other hand, go through the motions of their daily loops at the behest of masters long gone, and they are painfully aware of it. Some aspects of the worker robots in Fallout do seem to be a statement on the powerlessness of human laborers, but the meaning of the statement is difficult to parse. The robots are trapped in dead-end jobs, unable to ever escape, which is a pretty dire outlook for real-world workers in similar positions.

The robots are used as entertaining and often amusing characters that help flesh out the wastes, sometimes playing similar roles to the butlers and servants in old sitcoms. Like those characters, the robots often couch their service in a framework of jokey sarcasm. But in real life, such an attitude would result in a quick trip to the unemployment line. Fallout is, in the end, fictionalized entertainment. And even in Fallout 76, even if you are a robot, eventual death is certain.

One day, the internal functions of these devices will fail, and their artificial minds will be freed from their pointless servitude. But for now – just as humanity marches on, locked into our own routines and patterns as the world slowly burns around us – these robots will continue working their jobs, running their pointless elections, wandering in circles looking for makers that vanished long ago, leaving them forgotten and alone.