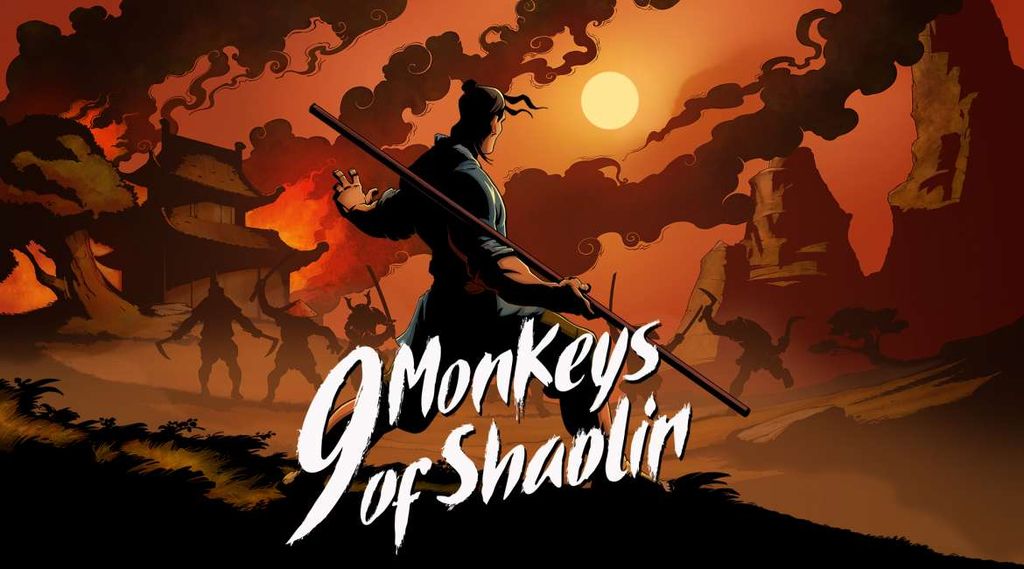 9 Monkeys of Shaolin PS4 Review – Daisuke Tsuji (Jin Sakai – Ghost of Tsuhima) stars in this 70’s kung fu inspired beat ‘em up from Sobaka Studio. The Russian team of developers received plenty of awards for the early demonstrations of 9 Monkeys Of Shaolin in 2018. Finally, we have a full game to dive into and find out what the hype is about. The game packs plenty of punch and a surprising amount of versatility. 9 Monkeys of Shaolin might just be the best new fix for any fan of Kung fu movies.

The first challenge in 9 Monkeys of Shaolin is getting to grips with the button layout. The game features 3 different melee attack buttons compared to many beat ’em ups where there is only one. Additionally, there’s a parry and dodge button that you need to worry about. It feels like a lot to get your head around at first. However, it wasn’t long until I was dishing out fluent combos of pole punishment upon unsuspecting hordes. The game coaches you away from being a button confused muppet and turns you into The Legend of the Drunken Master. Add a little Qi magic and you’ve got an incredibly enjoyable core loop.

Once you have got to grips with the controls, you find yourself getting into your own personal groove. There’s so much variation when it comes to approaches to attacking that you end up having your own preferences. The combat features 3 stances; base stance, acrobatic stance, and magic stance. These behave as attack modifiers that you can individually enhance in what results as your character-build in an RPG sense. Upon completing the game with a preferred style, I couldn’t help but look for and explore different approaches to the game. There is a bit of a learning curve but it’s very addictive, smooth and fast-paced fun.

The game’s different enemies challenge the player to adjust their combat flow specifically to take them on. Moreover, there is enough diversity to keep the player on their toes and make each fight fresh. You’ll take on hordes of pirates, armoured samurai, snipers, and impervious ghosts all in one on certain occasions.

In addition to those instances, the game throws at you environmental hazards unique to levels. This might sound intimidating to some, it was those challenges that proved the most addictive. Contrary to being intimidating initially, the game actually got quite easy once the controls had been mastered. The magic attacks, in particular, feel very overpowered, especially when combined with enhancing equipment and items. As is the case with many RPG-esque games, the character progression can sometimes outpace the difficulty of the game. However, it was still nice to breeze through the closing moments of the game and I felt incentivised to try levels again on a harder difficulty.

The pacing of the game feels right. There are 25 Levels of a similar short length (dependent on difficulty) that you can access through a base camp hub. From that base camp, you can select items, collectible masks, skill improvements, co-op play, and gameplay modifiers. The frequent breaks from the fast-paced action were a welcomed interval. All levels are replay-able for reduced skill point rewards and in my experience, I was eager to give them all another go on the higher difficulty and co-op play. If anything I just wished there was more campaign.

The boss fights are a nice change up to the action, and on occasion frustrating, but a satisfying challenge. They generally work well with the flow of the story as well as incrementally asking more from you from combat. The story itself isn’t particularly remarkable. You’ve got classic themes and tropes (rebirth, overcoming the monster) and efforts to portray the period of Wukou pirates raids in 16th century China, in which the story is based on.

On the other hand, you’ve got a rarely interesting, occasionally humorous series of dialogue and narration. However, I was often distracted during the story segments. I found myself wondering; “Why is this game about Shaolin monks called 9 Monkeys? Is it a typo?”. In any case, the story does serve as a nice but unimaginative glue between the gameplay segments.

Despite the stoic nature of the cast and story, the characters did have an appeal. The lead character Wei Cheng, voiced by Daisuke Tsuji, offers a few wise-cracks makes for a believable and enjoyable protagonist to control. The character models in general, as well as the cartoonish art style as a whole, works well. The enemy design in particular was noteworthy. Distinctive variances in the enemy models are important to how you experience the core loop and I felt the 9 Monkeys of Shaolin kept a good balance in this regard.

Also important to the core loop of the game is the excellent use of sound. The effects that enhance your strikes and a mashup of traditional eastern and metal music make every encounter an exhilarating test. This is best showcased in the boss battles, with a very satisfying signature effect upon defeating your foe.

The backdrops for the stages feel very clean and artistic, yet still manage to create an authentic feel of 16th Century China. However, the grass rendering was a bit of an eyesore. 9 Monkeys of Shaolin is a small budget production by a small team and that is something that has to be considered. Despite that, I couldn’t help but think the cell-shaded grass effect looked much cheaper than the rest of the game.

A Short But Addictive Fighter

9 Monkeys of Shaolin has some major selling points. The versatility and addictiveness of the combat are possibly the most impressive I’ve experienced from the beat ’em genre in a long while. I certainly wished for more of a campaign experience but there’s definitely no shortage of replayability. Players won’t get much of narrative-driven adventure out of 9 Monkeys but beat ’em up fans that are accustomed to the genre are going to get an absolute blast out of the game. Furthermore, you’ve got a game that plays well as a single-player experience and gets even better in co-op.

9 Monkeys of Shaolin is available now on PS4.

What 9 Monkeys of Shaolin lacks in typical beat 'em up fashion it more than makes up for with a dynamite combat system. The 5 hour campaign may feel a bit short, but replay-ability and co-op modes offer good value for the purchase. 9 Monkeys of Shaolin is a great pick fans of the genre, or anyone wanting to get the best gameplay simulation of 70's Kung Fu movies. Don't let the terrible name put you off!