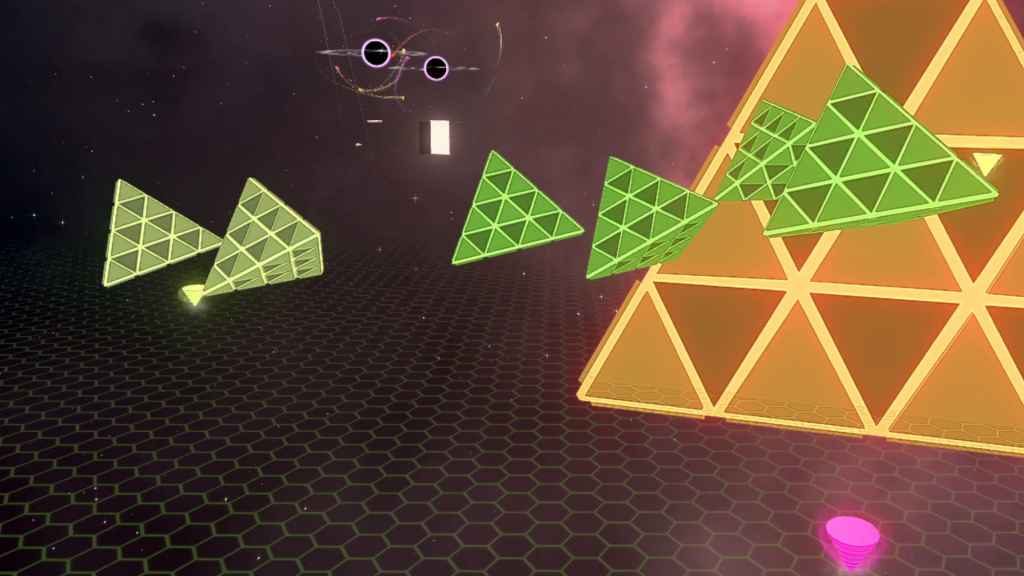 Finnish Development team Mekiwi Oy’s new PSVR release Art Pulse isn’t exactly a game. Rather, it is a VR experience, a short-lived but fun toy that is very enjoyable to play around with, but doesn’t offer enough content or structure to continuously bring players back.

If Art Pulse had been released at PSVR’s launch, it would have been a shoo-in for a must buy, as it is a stunning demonstration for spatial play, and the joy that perspective and movement can give players in VR. Releasing at this late date, Art Pulse is still an enjoyable curiosity, with a few fun tricks up its sleeves. I don’t know that anyone should burn a hole in the floor getting to their PS4 to purchase Art Pulse, but the gently curious will likely be rewarded when they eventually check it out.

Art Pulse Delivers A Sense Of Discovery – For About Fifteen Minutes

I’m almost reluctant to describe the gameplay in Art Pulse, as discovering what all the little doodads and art tools do is most of the fun. If you already bought Art Pulse, maybe go play around with the game and come back later to read this review. It’ll be more fun for you that way.

For everyone else, here’s how it works: You begin Art Pulse floating in the middle of an enormous space. It is hard to describe how big this creation area is; you can’t see the edges of it from your starting position. I later made a point of exploring from corner to corner, and moving at top speed it took about three minutes to traverse. It’s big.

On your left Move Controller, you have a palate filled with various art tools that you can bring up by pressing the Move button. On the right is a color wheel. Your job is to start using the tools from the palate to plunk down various objects in the space and see what they do. That’s about it, but the process of experimentation is very enjoyable for a bit.

Before long, you will discover that various objects make different sounds. Once you get the hang of it, you will find yourself putting down objects like adding loops to a musical track. Boxes of various colors produce different drumbeats. Place enough of them together, and they form a cohesive rhythm.

Spheres and triangles add different synth parts. Produce brilliantly colored cones, and they fall to a strata beneath you – zipping around and adding to the song. In this way, you eventually construct a song by placing objects around the space, and the effect is super cool. Art Pulse comes with five or six songs to choose from via a simple menu system. So when you get sick of one, you can change it up.

Players can move about the space with some simple and intuitive movement controls – and this is where Art Pulse excels. Holding down the X Button on one Move will have you drift in any direction you point the controller, making it a snap to whir through the space and examine your creation from other angles. The other Move Controller has a rotate button to reorient yourself. It all works very well, and is one of the better movement systems I’ve encountered in VR.

Since there isn’t any scenery in the space beyond what you place there, you never get uncomfortable while zipping and swooping through the space. After several years of nausea from open movement systems like this, to be able to use one freely is quite liberating, and gives a sense of what movement in VR could be like if we didn’t have to worry about accommodating these pesky human bodies. I quickly learned that by holding down the button on the free-draw tool and dashing about the space, I could make enormous abstract creations, which is very enjoyable in a formless sort of way. However, this activity quickly highlighted one of Art Pulse’s technical limitations.

Most of the objects you place in Art Pulse have a limited life-span. Even if you use the menu to turn off objects’ self-destruct function, you quickly reach a point where they start disappearing. Attempting to draw a line from corner to corner, I discovered why.

Some technical limitation in Art Pulse (or maybe it was done on purpose – though I can’t imagine why) only allows so many objects to exist in your creation space at one time. If you are drawing an extremely long line, you will hit a point where drawing further on one end will cause the other end to disappear in time with your drawing. Through further creation, you begin destroying your previous created objects. Poetic, but kind of a bummer.

Further experimentation revealed that this limitation applies to objects as well. Create a complex solar system with moons around planets, and you hit a point where each moon you add causes a previous moon to disappear. With a space as large as this one to play in, having such low ceilings to what you can create feels extremely limiting. I wondered what motivated players could create in this giant space if the developers found a way to remove the training wheels from Art Pulse.

There Is Platinum Hiding In This Space!

On a side note, and less related to Art Pulse’s gameplay, trophy hunters will certainly want to grab Art Pulse, as the game has a Platinum trophy – very unusual for a game of this scope. I blasted through 90% of the trophies organically in about six minutes, and the only thing that kept me from getting the Platinum was the fact that one of the trophies seems to be broken and won’t fire. Nonetheless, I’m sure the devs will fix this shortly, making Art Pulse a must for Plat fiends.

Art Pulse is a fun way to play with color and sound, and I found the entire experience to be somewhat meditative and freeing. While I can’t necessarily recommend the game on gameplay grounds, fans of things like Harmonix’ early VR experiments will likely enjoy this. Younger players with lower expectations and a greater sense of play will likely enjoy Art Pulse as well. There isn’t a ton of meat on the bones of Art Pulse, but what is there is tasty.

Art Pulse is currently available on the PlayStation Store for PSVR.

Art Pulse is more of a toy than a game - but pleasant electronic music, brilliant colors, and a great movement system make Art Pulse an experience that certain people will enjoy quite a bit. While there is almost no structure and the creation tools are ultimately limited, just existing in Art Pulse’s space is pleasurable for a time. Keep your expectations lowered, and you might enjoy simply existing in this gamespace.