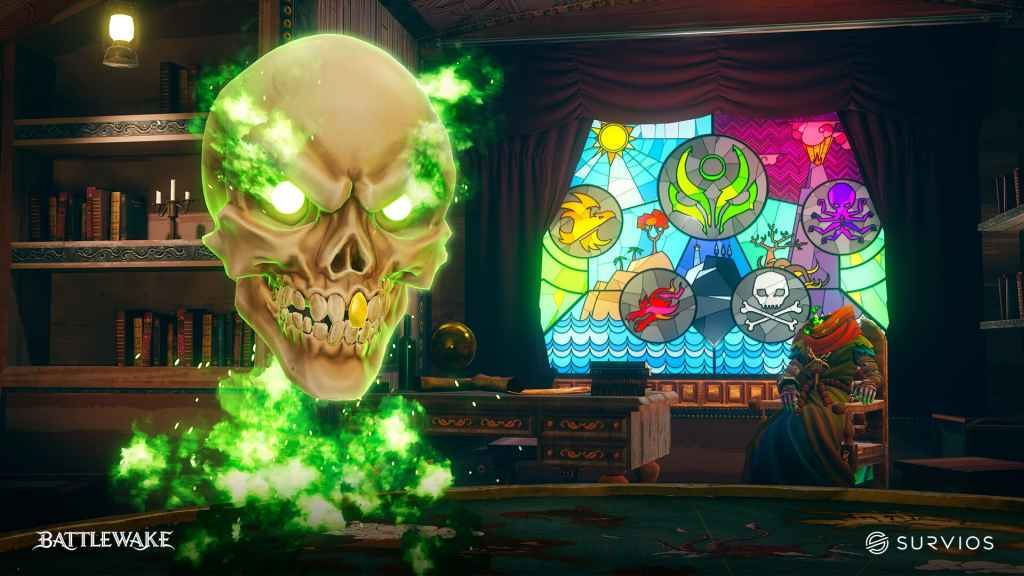 I was raised on boats. My dad was a charter boat captain when I was a boy, so I spent summers of my youth out on Lake Erie, acting as his first mate. Laying in my bed at night after a long day on the water, my body could still feel the rocking of the water, lulling me to sleep.

I was shocked, utterly shocked, when this happened to me last night after a few hours of playing Battlewake. Laying in my bed, I could still feel the rocking of the boat. Whatever else I’m going to say about it, Battlewake absolutely nails the feeling of being on a boat out in the water; the motion of the waves heaving the boat beneath you, constantly reminding you that – at least partially – this situation is beyond your control.

Being able to deliver on that feeling – without a hint of nausea or discomfort – is an enormous feather in developer Survios‘ cap. Regardless of how I feel Battlewake holds up as a product, I want to acknowledge that technical feat loudly and clearly.

As a rule, Survios creates games that are arcade-ready. The company owns or partners in a number of VR arcades, so the games Survios creates must be easy to pick up – with simple controls and concepts that are quickly recognizable to the layman non-gamer.

Battlewake hits all of these criteria. This is not a game that is difficult to pick up and play. Basically a nautical-themed arena shooter, anybody could pick up two controllers, log into Battlewake and have a good time. But how long they keep playing is another matter.

Players can steer their boat by grasping the wheel with one Move Controller, while aiming and firing weapons with the other, but I found controlling Battlewake with the DualShock to be far simpler. This is one case where immersion quickly took a back seat to practicality. In the DualShock configuration, steering is handled by the left stick, while aiming is accomplished by pointing the controller where you want to shoot and using the R2 and L2 buttons. Using this control scheme leads to a lot less fumbling about.

Weapons are automatically chosen depending on where your enemies are. Each ship has unique weapons, but they follow some basic parameters. Bow weapons are fast but weak, weapons along the side of your ship are slower but far more powerful, and stern weapons are glacial, but give enormous bang for your buck. Better be careful though, because your stern is the most vulnerable part of the ship; if somebody gets behind you while you are lining up a shot its basically a one-way trip to Davy Jones’ locker.

The boats look good and handle great, with side “anchors” that essentially act as hand-brakes, allowing you to make ridiculously tight turns. Each captain has a special move on a light cool-down, and a stunningly powerful ultimate that builds over the course of a battle. And battles are fun for a time, though there are really only a few variations, making a lot of the game feel pretty same-y.

In the brief campaign, players take each of the four playable characters through the same gauntlet of not-very-difficult scenarios; a few open sea battles, a battle where you are restricted to using your special powers with no cool-down, a battle where you defend a fort from attacking ships, and a final boss battle. Rinse and repeat four times, and you are done – rewarded with some gold to upgrade your ships and very little else.

Battlewake is a title that is light on content, which is strange for a Survios game, as this is a company that typically sets a high standard for PSVR games. With a campaign that lasts only two hours, Battlewake is putting a lot of stake into being fun to play online – and it was fun the two times I managed to get into online matches.

There are several online modes – a multiplayer version of the campaign, a four player mode that puts players through a series of challenges (which can also be done in single-player), and “Plunder”, which is the meat-and-potatoes deathmatch. But broken matchmaking is preventing any sort of player base from forming, which is hobbling the Battlewake experience.

The way it works now, players enter into Plunder mode, and the game looks for and finds an instance within about 20 seconds. The game asks the player to pick from the four playable characters and ships. Having done that, players are placed into lobby – a rather nicely rendered cabin in a pirate ship. A large “Ready” button floats in front of the player, along with a prompt to ready-up if they are certain of their choices.

When the player clicks the button, they are dumped into the watery arena whether other players are there or not. The game quickly realizes that the player is alone and dumps them back to the lobby after a short countdown, asking them to once again pick a captain and a ship. Rinse and repeat, endlessly.

The issue is this: the game tells the player that it found a game. As a result, the player doesn’t know whether they are joining a game in progress or if they are starting a new match. That “Ready” button should not show up unless other players are present. Instead, the game should show something along the lines of “Looking for other players…” The appearance of that Ready button implies that there is something to be ready for.

As it stands, it is a crap-shoot as to whether you will enter this lobby at the same time as another player while you are both cycling through this weird gauntlet. If you will forgive the metaphor, multiplayer sets up a “two ships passing in the night” scenario. The first time I ran into another player, he yelled “Oh my God, finally!” into his microphone. The second time, the other player asked, “How the hell are you supposed to find anyone?”, as if I might know.

Battlewake Is Foundered By Lack Of Cross-Play

This lack of cross-play is absolutely devastating to Battlewake on PlayStation VR. PC VR systems have cross-play between them, but PSVR was left in the cold this time, which is frankly unacceptable. At this point, instead of “graciously allowing” cross-play, Sony should be forcing cross-play on developers, funding the development themselves if necessary. The PSVR community alone is not enough to support most multiplayer games; new games need the supplemental player base that cross-play brings. Get behind your platform, guys.

What we are left with is an online multiplayer game (with a short campaign) that is next to impossible to play – as the one, two punch of bad matchmaking and no cross-play have conspired to render Battlewake almost dead on arrival. Which is a shame, because as I mentioned, the technical achievement is stunning and the arcade-style gameplay is pretty fun.

PC VR gamers seem to be having a pretty good time with Battlewake. Indeed, there is a solid skeleton here for a good game to be built on – if Survios doesn’t throw in the towel and continues to work on Battlewake. But whether you want to put thirty doubloons on the table for a game that might someday be good is entirely up to you.

For now, once the matchmaking is fixed, I would recommend Battlewake if you have a group of friends that are willing to buy it and play with you. As is often the case with VR games, you might end up having to make your own community. Honestly, Battlewake is pretty damn cool when it is firing on all cylinders. If you have a group of dedicated PSVR players, it is worth your time to take a look.

If not, I guess we will all see each other in The Walking Dead Onslaught.

Battlewake is available now on PSVR and PC VR platforms.

A technical achievement to be sure, Battlewake succeeds in delivering accessible arcade-style naval battles. But underwhelming depth in the campaign, combined with broken matchmaking and a lack of cross-play with PC VR systems leaves the long-term prospects for Battlewake looking pretty grim. It is no fun having a cool game that you are unable to play, and that's what Battlewake released as.