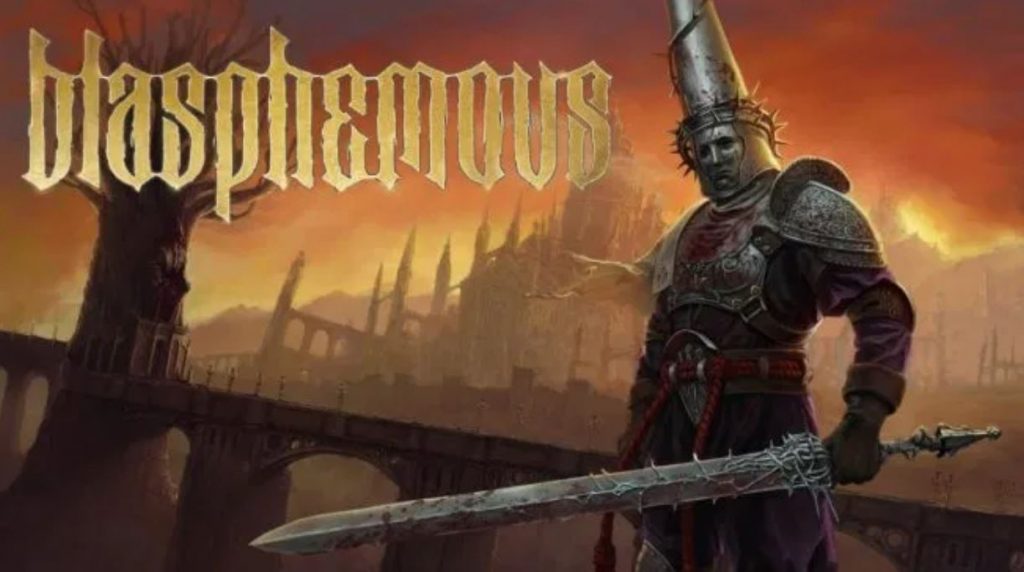 After playing Sekiro: Shadows Die Twice I concluded that I needed a serious break from ultra-difficult games as the stress of these titles started to take a serious toll on me. Blasphemous was a title that I had been following for years and it didn’t long before the game would reveal itself to be another challenging affair. Thankfully, I took a shot and delved right into Blasphemous and what I got out of it is one of the better side-scrolling platformers I’ve played this year.

Blasphemous takes a lot of cues from From Software titles with its story presentation. Blasphemous’s story is a religious one as one might expect from the title, but it’s really hard to follow. Rather than taking a full-on narrative approach a lot of the game’s story is told through its lore and items. By examining the items you collect you’ll learn a lot about the world and the characters that live in it. It’s not my favorite way to tell a story as there is a lot of it you can actually miss simply by accident.

As an action platformer, Blasphemous is excellent. The combat is brutal and each attack really has weight to it making the combat very satisfying. As the Penitent One, you can parry most enemy attacks with a perfectly timed block and counter-attack doing massive damage. This is also the best way to pull off stuns on enemies. When an enemy is stunned with enough damage sustained, you’ll be able to pull off an execution attack.

Though Blasphemous looks like it’s a very difficult game, the developers have given you plenty of skills and abilities to get through most encounters with ease. I never really felt the game was as difficult or punishing as the titles that From Software specialize in, but more akin to the SNES action platformers of old. It’s tough but not too tough.

There are plenty of locations where the game forces you to take damage just because of the enemy placements and the attacks that these enemies will pull off. It’s something that has plagued these types of titles for generations and it doesn’t seem to change here, sadly.

The attacks that you’ll pull off in Blasphemous are brutal, and much like Mortal Kombat’s own fatalities and performing them will net you extra points to use to upgrade the Penitent One’s combat skills. Upgrading is fairly basic with only offensive skills getting the upgrade treatment. Some abilities are locked by how many special items called Altar Walls you’ve found, meaning you can’t simply upgrade whenever you want.

At first, I was upset that there are so few of these Altar Walls but I quickly realized that new abilities cost so many points to unlock that by the time you accumulate enough points you would have found the next Altar Wall. It’s not just the abilities that are important, there are plenty of items and collectibles to discover as well. A lot of these items can be used to equip on the Penitent One to give him extra buffs, like quicker recovery times from falling from a great distance or gaining health from destroying objects like vases and lanterns.

The most important items in the game are Relics. These are absolutely worth finding as they allow access to many hidden areas and even help you in a lot of the more dangerous locations in the game. One such Relic allows you to breathe in the more toxic locations in the game, for example where deadly clouds are present that will kill you rather quickly. Another Relic reveals hidden platforms that allow you to reach hidden locations, and so on.

If you look at Blasphemous, you’ll see just how gorgeous the game’s pixel art is. It looks even better in motion. The animations are top-notch and the environments bolster some great vistas and creepy dungeons alike. Audibly, the soundtrack is also chilling but soothing at the same time.

Blasphemous is now available on PlayStation 4, Xbox One, PC, and Nintendo Switch

From start to finish Blasphemous kept me engaged. Even when I reached the end I just wanted the game to keep going. I'm not the biggest fan of its approach to storytelling but the combat and exploration borrows from the best the genre has to offer.