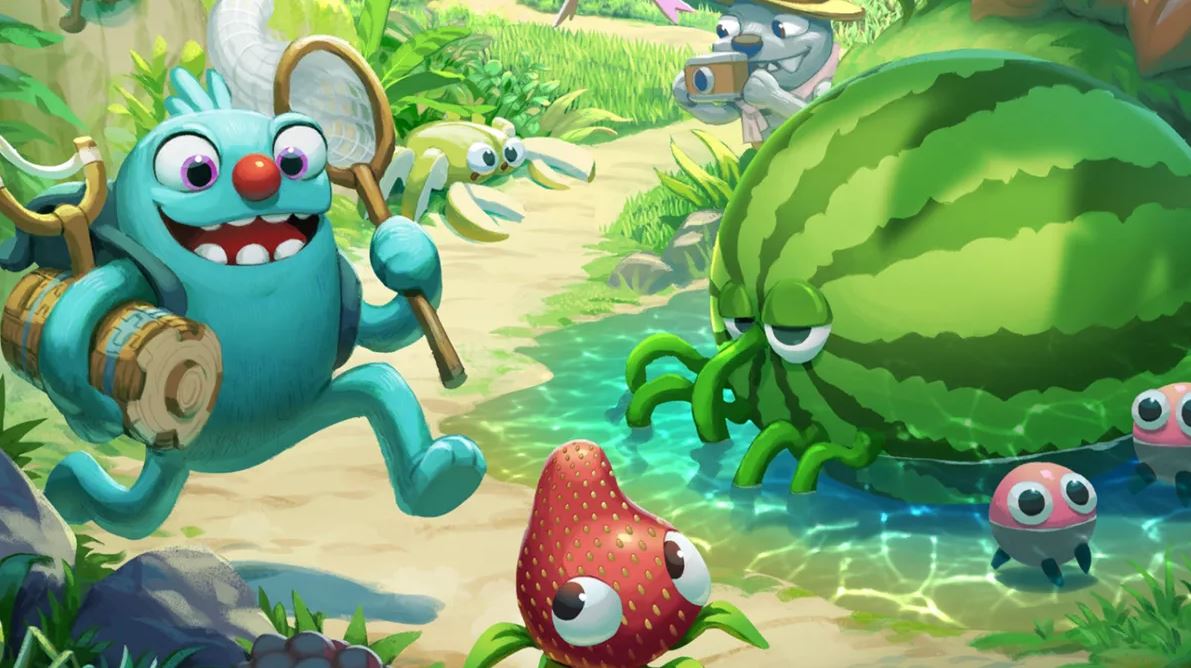 Bugsnax PS5 Review – Now that it’s been out in the wild for nearly two weeks, it goes without saying that Bugsnax has made a bit of a splash. Helped in no small part by the incessant word of mouth, shared stories of the game’s impact on players, and the fact that it is downloadable via PlayStation Plus, Bugsnax and its scurrying namesakes have held their own during the chaotic launch month of PS5.

Of course, back when we first reviewed Bugsnax, we played the game in its entirety on PS4, which it turns out is a slightly different way of investigating the strange occurrences on Snacktooth Island than on PS5. Though its charm, heart, and narrative were very much intact, the technical concessions of the PS4 version of Bugsnax were notable and ranged from persistent frame rate dips in certain locales, (more specifically the early game portion) to sizeable loading times as you traversed between the different areas.

A Lovingly Crafted Tale Of Intrigue

On PS5 it’s those loading times where the most pronounced of differences can be felt in this version of Bugsnax. On Sony’s older machine you can expect to face regular fifteen-second waits as you move between the game’s segmented areas. Worse yet, these areas are connected by a mandatory hub area – the town of Snaxburg – which means to get from one area to another you’ll need to pass through the town, which in effect doubles the load times you can expect to face. Though not eradicated completely, PS5’s load times are a great deal more manageable, usually clocking in at around three-to-four seconds, and this greatly improves the flow of the game as a whole. It’s surprising, however, that they’re not a thing of the past completely.

Although not touched on in our first review it is worth noting that Bugsnax is well-paced, the way in which the game unravels its intrigue by way of small conversations, hearsay, and through the goal of reuniting the town in a time in uncertainty, is one of its greatest traits. And this exploratory and narrative pacing is helped considerably by the reduced loading times. It’s not just a quality of life improvement, it’s in service to the gameplay which in turn unravels the narrative.

While the frame dips and general choppiness have by-and-large been cleared up by the added horsepower of PS5, there isn’t any major overhaul in how the game looks. Sure it’s delivering a crisp 4K image but there aren’t any wholesale changes to report. That being said, Bugsnax‘ visual style doesn’t rely on any sort of hyper-realism (thankfully, can you imagine what the Bugsnak-laden Grumpuses would look like?) so it makes sense that PS5’s added power wouldn’t alter anything substantially in this regard.

Not that it matters much anyway, as Snacktooth Island and its inhabitants are lovingly designed, with plenty of unique, inventive twists on what you’d expect to see if you crossed a cinnamon roll and a snail; that thankless vision is easily achieved with PS4 – it just shines that little bit more on Sony’s newest console. Whether or not that added detail and definition to some of the Bugsnak is a good thing, you can be the judge – one thing’s for sure, Bunger has never looked so menacing.

A key component of PS5’s overall feature set is undoubtedly the DualSense controller. This is another aspect where Bugsnax is improved over its PS4 brethren. The improved mic allows for a clearer enunciation of each creature’s voice line (their own name, no less) but the real difference comes in the form of the controller’s haptic feedback and adaptive triggers.

For the former, you can now feel a creature scurry around the controller once you’ve snapped them up in your Snak Trap – it’s this implementation that is probably the most notable in the grand scheme of things. Of course, the DualSense lightly rumbles as you bop around the world, and has other situational uses, such as identifying when a Bugsnak has walked into your trap’s parameter, which can come in handy if you’re perched behind a tree out of sight.

With respect to the adaptive triggers, the most persistent usage comes by way of the game’s camera – an investigative staple – with the R2 trigger simulating that of a shutter, and it feels positively lovely. Just as well, as you’ll be using it a great deal. It’s a relatively simple addition, sure, but since the camera as a mechanic gets an awful lot of usage throughout the course of the game’s ten-hour-long campaign it’s good to have a tangible feeling associated with it.

An Additive Experience On PS5 Rather Than A Transformed One

Though more additive than transformative, PS5’s unique feature set and wealth of power has ensured that this is the best version of Bugsnax on offer. It is a lovingly crafted tale of intrigue that manages to engage the player from start to finish – not only for its quirky exterior but for the heart that undoubtedly lies inside.

Bugsnax is available now on PS5.

A performance cleanup thanks to PS5’s added juice coupled with some well-implemented usage of the DualSense controller means that Sony’s newest console is the best place to play Young Horses’ second indie offering, and it ensures that we’ll be ‘talkin’ ‘bout Bugsnax’ for a while yet.