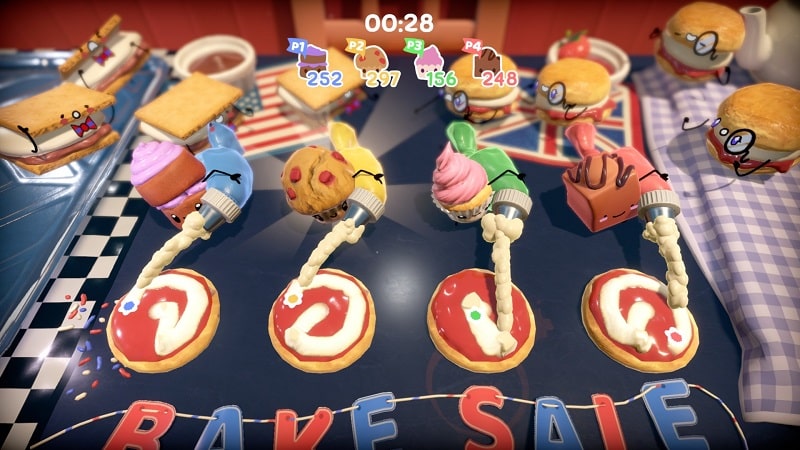 Cake Bash PS4 Review – As we descend into what looks like the single largest release quagmire month in living memory (yes, November, I’m looking at you), it can often seem as if time has been unnaturally squeezed and that somehow there just aren’t enough hours left in the day to indulge ourselves with games that are equal parts rewarding and worthwhile.

Enter then, Cake Bash from developer High Tea Frog and publisher Coatsink. A decidedly light and fluffy affair, Cake Bash carves a neat little niche for itself as a beautifully bite-sized party offering suitable for all ages. Oh, and High Tea Frog also get bonus points for putting their doggo companions at the top of the studio credits sequence with the role ‘Good Dog’ too, but I digress.

Similar in a fashion to the super popular Fall Guys, Cake Bash operates a tournament style format where up to a quartet of players (or bots, or a mixture of the two depending on your circumstances), must triumph over one another in a series of increasingly twee and wholesome minigames.

Whether you’re trying to throw the most amount of fruit into a pie, stick as many sweets onto yourself as possible within a time limit or attempting to avoid a shower of falling cutlery, there’s a fair amount of variance in the numerous cake bash events that you can participate in. Sadly, there aren’t quite as many events as I’d like to see, but all the same Cake Bash is a tasty offering that is supposed to be taken in small bites, rather than just gulping and swallowing the whole thing without it even touching the sides.

There are sufficient hazards in these mini games to keep you on your toes too. On some levels you’ll find yourself avoiding falling eggs whose spilled yoke is akin to treacle in how it slows you down, while on other stages, fiendish players can turn on a heating ring to scorch their foes and further afield still, massive pigeons can swoop in and create absolute misery for everyone.

And really, when you’ve got friends with you, be they with you in the same room or far away, this is when the wanton, sugary chaos of Cake Bash is both amplified and arguably best enjoyed. However, rather than just existing as a series of isolated minigames, there is an end goal in Cake Bash that all players must strive for – namely, put as many chocolates on your cake as you possibly can so that you get picked by hungry, sweet-toothed customers.

You see, in between rounds you can go ‘topping shopping’ (honestly, I’m not making this up) in order to transform yourself into the tastiest cake by trading in the chocolate coins you’ve earned from your performance in the various Cake Bash minigames. Some toppings cost more chocolate coins than others and if you’re able to purchase three of the same type of topping, you can gain a bonus which might help you to leapfrog a nearby rival on the leaderboard.

There’s actually a rudimentary kind of progression embedded into Cake Bash too, as each time a tournament is completed new skins, cake types, arenas and minigames are unlocked for exhibition play – deftly compelling players to keep on cracking away at Cake Bash’s primary tournament mode.

Embracing its theme with verve and delectable style, Cake Bash looks every part like the sort of Great British Bake Off fever dream that one might expect – albeit with various sweet treats. Boasting some of the most gorgeous and craving inducing sugar shaders I have ever seen, Cake Bash’s visual presentation is eye-opening to say the least, while the whole thing skates along at a buttery cream smooth 60 frames per second.

Ultimately, there’s an infectious and wholesome charm to Cake Bash that transcends its seemingly simplistic design DNA; the spectacle of watching richly detailed desserts battering and outwitting one another is one that endures for far longer than I would have initially expected.

Sure enough in its current form, you could well argue that Cake Bash doesn’t necessarily have the depth to keep players going for the long-term. Again though, this isn’t the sort of affair which is intended to be continuously played day in and day out, but rather sporadically played like a treat in order to keep it compelling. In this sense, Cake Bash will assuredly provide entertainment for a great many impromptu sessions of confectionary combat long before any new content is added to it.

Cake Bash then is a much welcomed agent of sweet relief during this current era of time swallowing AAA blockbusters and social calendar repression. Sure enough it’s not the most sophisticated offering out there, but as a tasty morsel of instantly gratifying multiplayer fun that can be gleefully enjoyed by players of all ages at just about any time, Cake Bash’s recipe for success would certainly seem to be an delectable one to say the least.

A delectable morsel of saccharine sweetness that everybody can enjoy, Cake Bash is that rare kind of party game that is instantly accessible and can fit into just about any gap in your schedule. An easy recommendation for players of all ages who just want to feel their faces crease again.