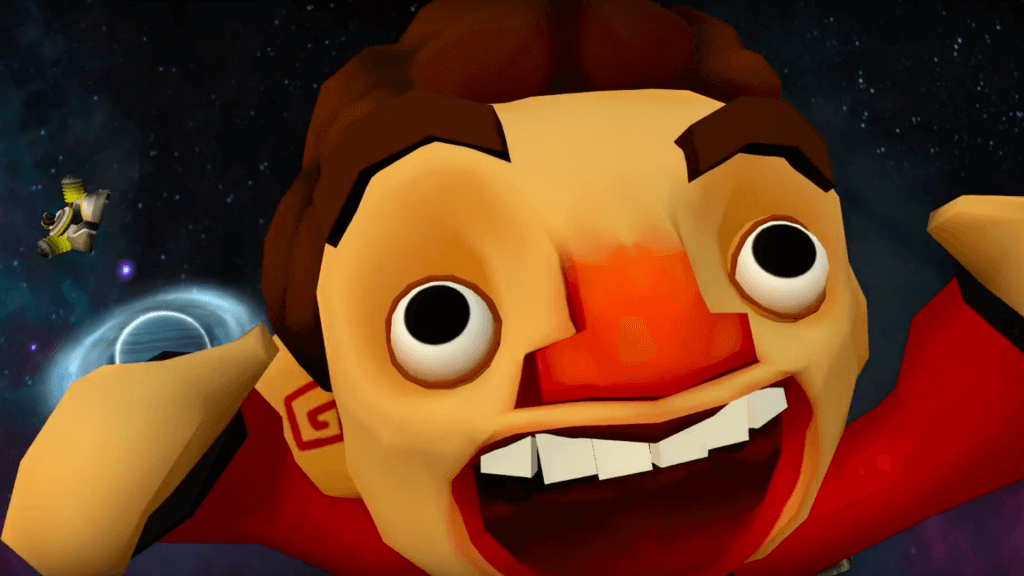 Based in space, Catastronauts is a fun indie title based in space from Inertia Game Studios. In the game, you take control of crew members aboard a space ship as you frantically run around repairing damage, dousing fires and shooting your laser cannons at the enemy ships which have taken your captain.

Catastronauts is a four-player, fast-paced party game where your tiny crew run around the space ship doing anything they can to take down the immediate threat of an enemy ship. The game can be played in single-player mode too, though you’ll need to control two crew members at a time (which can be very frantic), so playing with friends is the best and most fun way to play.

The level selection screen is superbly designed and reminds me of games such as Crash Bandicoot, where you’d run around a small area and stand on buttons to activate the level you wish to play. Except in Catastronauts you’re on a small space station where you can see ships floating around outside of the windows when you’re choosing your level. There are five buttons in each room corresponding to each level, and as you progress the next button becomes active. When all five are complete you’ll be able to move onto the next level within the space station. Sometimes I found myself just standing in the hub watching the little ships go by, which did bring a little smile to my face.

The difficulty of each level gets harder as you progress by throwing more things at you, like teleporting fire extinguishers and repair kits to other parts of the ship, so your crew members are able to replace parts of the ship you cannot access. The enemy also gains improvements to their ship which includes more laser turrets allowing them to fire more rapidly at your ship and causing a considerable amount of damage. I found the level of difficulty scales very well, which keeps the game fun and enjoyable while also keeping it challenging.

Catastronauts does a brilliant job at keeping you on your toes. You’ll be handling multiple tasks at once and one small fire that you might leave alone – to focus more on damaging an enemy ship – could result in a ship-wide fire which can potentially harm members of your crew. After I left a fire for too long, it had engulfed most of my ship and took out one of my crew members which led to the imminent destruction of my ship.

Catastonauts Is Meant To Be Played Co-Op

Playing Catastronauts with three other people is where the game really shines; you can have multiple people assigned to different things, allowing one person to keep their focus on dealing the damage while another will focus on the repairs for your ship. Catastronauts is a really fun couch co-op title that you’ll keep coming back to take on those harder levels further down the path.

Catastronauts is a beautiful-looking game and the overall art style reminds me a lot of Overcooked 2. The ship designs are great and very pleasing to the eye as they include a lot of detail – at certain points I noticed a small circuit board on the wall which had started to spark from taking damage (even though I couldn’t repair it) which was a great little detail. The only frustrating thing about Catastronauts is when playing single player and the game gets you to play as two crew members at once. The problem is the other crew member will just stand there doing nothing unless you’re constantly using R1 to switch between them. As the difficulty ramps up, it becomes more frustrating playing solo.

Nevertheless, Catastronauts is meant to be played co-operatively. It plays a lot like Overcooked 2 from Ghost Town Games and Tiny Brains from Spearhead Games, which are both great titles when you’re got three friends around.

Catastronauts is a very enjoyable title where the difficulty scales very well with each level and I found myself enjoying every level and the challenge that comes from overcoming tasks and taking down alien ships along the way.

Another great couch co-op game hits PS4! Catastronauts looks good and gets the balance right between challenge and fun. It's a blast with friends as you work together to complete multiple tasks on a space ship.