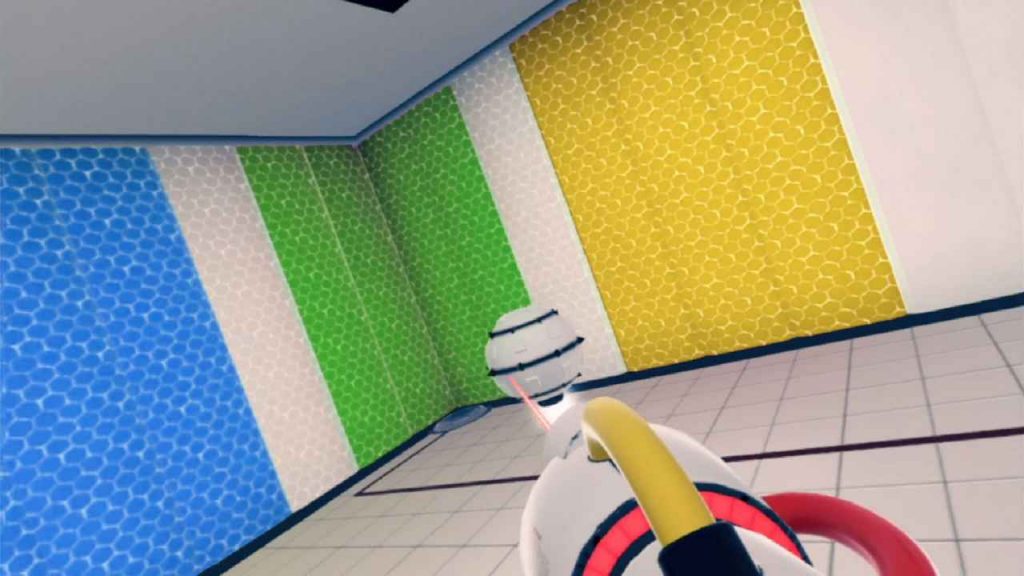 ChromaGun was originally released for the PlayStation 4 in 2017 and it scored fairly well in its reviews. It was praised for its art direction and puzzles but reviewers felt it was held back by its repetition, linearity and the fact that puzzles only have one solution. The VR version seems to be an exact copy of the original in every way and even the trophy list is very similar.

You are plonked in a Chroma-Tech’s test lab to experiment with the latest state-of-the-art military-grade colour-technology: The ChromaGun. It’s your job to complete various tasks and puzzles to advance to the next room, find the exit and hopefully complete the test. On my arrival at Chromatech, I was immediately amazed by how well the world looked in VR. I still get taken back when I start a PSVR game. A younger me could only have dreamt of this kind of experience. Being able to stand inside and interact with game worlds we all love. When it’s done right It’s brilliant. Using the AIM VR controller and it tracked perfectly, it felt completely different from the non-VR version I had played briefly before, much more tactile and it massively enhanced the immersion.

The controls in VR were great too, with one joystick on the Aim controller for walking and one for turning. It was all very natural and felt immediately familiar, and it’s very pleasing when you are immediately pick up the controls and can just get straight on with the gameplay.

My only issue here was the walking speed, which felt a bit slow. I think the game would benefit from a run button. Comfort-wise I never once felt dizzy, nauseous or got VR sickness. The game is handled very well with turning increments and smooth movement. I have had a lot of time in VR though so this will vary from person to person. I did try the game briefly with the Dualshock 4 controller, and while it was fine, unfortunately it had nowhere near the immersion factor that the Aim controller gives you.

The first sections of ChromaGun VR act as a tutorial, just setting you up and getting you used to using the ChromaGun and its feature set. You are presented with a few basic puzzles that slowly introduce new elements and functionality to you. The puzzles slowly ramp up in difficulty and before you know it you’re a VR colour blasting bad-ass.

Your main task in each room is to unlock the door to the exit. Standing in your way are worker droids, switches and various colour puzzles. Worker droids are small floating spheres, sometimes dormant and sometimes active. The dormant ones will just float stationary in position and the active ones will track you down and try to damage you.

These worker droids can be manipulated and they will be attracted to the same colour as themselves. If you were to paint a section of the wall red for example, red worker droids will track that part of the wall instead. This enables you to move them around, flick switches and make them do your bidding.

The worker droids can also be coloured and manoeuvred around puzzles as required. Not all walls and droids can be painted though, which adds an extra layer to the puzzle solving and creates more elaborate puzzles. You start with one colour in your ChromaGun and things are nice and light on the puzzle front. Eventually, you get an upgraded cannon that has multiple colours and that’s where things really get interesting and the puzzle difficulty goes up a notch. Not the Droids You’re Looking For

When you have completed the opening levels and the tutorial you are pretty much left to it, apart from the odd witty comment from our voice over guy to guide you through. There are references to Star Wars and other pop culture in there. Unfortunately, these quotes do get quite repetitive and start grating on you. This starts to get very noticeable when you make a mistake in a puzzle that only has one solution. A forced restart is the only way to restart the puzzle and you will yet again be treated to a witty quip from the voice-over man and they get old, fast.

That is one of my biggest flaws with the game, as most puzzles only have one solution. As you are experimenting to work out the solution you will inherently make mistakes. There’s just no other way to solve them – trial and error and making mistakes are how you progress. The only way to undo your actions is to restart, which is workable but by no means optimal. Those quotes from the announcer do get annoying, but luckily they do get less the further you progress through the game.

I do really like the tangible tactile use of the Aim controller; it’s so easy to use and I don’t think I would have enjoyed the game anywhere near as much without it. Aiming is fast and accurate and actually holding the gun in your hands makes it incredibly immersive.

The upgraded ChromaGun has three colours at its disposal, it’s easy to swap between them as they are represented by the triangle, circle and square buttons. If you were to look at your ChromaGun in VR, the colours are where your buttons are in the real world. You are never scrambling around to work out where the colours are.

If that’s not your bag then you can use the two triggers on the front of the Aim controller to alternate colours. This did come in handy for some puzzles that required a bit of momentum and pace. It’s very well designed and very simple, it just works. Your three colours can be mixed together to form three other colours, and this is where the game gets interesting.

The order you solve parts of puzzles is paramount because when you have used two colours any other changes to the walls or droids causes them to be coloured black. The droids will then just hunt you down or remain dormant and still.

If you start with a plain coloured droid, paint it blue, then add yellow to make green you cannot alter it in any way. Your moves and painting have to be planned, therefore mistakes will be made and many restarts will be inevitable. Quite often I painted the wrong wall or wrong droid and had to restart, maybe a undo feature or something along those lines would have made it slightly less irksome. Is that you, Portal?

ChromaGun VR does look a lot like Portal. All the rooms are bright white, the switches, doors and everything in the rooms plain and clinical looking. You are carrying a hefty piece of machinery around and manipulating objects in a 3D space. You can see where its influences come from and the game does not hide it. There is even a trophy which takes a slight dig at something from Portal. I will leave you to discover that for yourselves though, it’s quite good!

The graphics are very crisp and nothing is lost, even on the low-resolution PSVR screen. I felt very immersed and really enjoyed navigating through its many puzzles. My only criticism for this part of the game would be the nature of the puzzles and the colour scheme. A lot of the rooms and puzzles felt very familiar towards the end of my playthrough and it got slightly repetitive. Over the course of my five-hour playthrough, the look of the game started to get a bit drab. I do think though that this was the developers choice for the aesthetic and that’s fine.

Hazards of the Game

Dotted around the various puzzle rooms are hazards to avoid. Varying from electrified floors to colour meshes that will stop your coloured projectiles in their paths. The puzzle difficulty does ramp up as more hazards are added, making sure you are always on your toes. You can direct the droids into the hazards to nullify them or use them to slow them down. The learning curve was smooth and the puzzles were nicely designed. I never felt anything was too difficult or frustrating. Everything you needed to progress has been shown to you in earlier levels. On the whole, I really enjoyed my time with ChromaGun VR. However, I think I would have enjoyed it far less if I was not using the Aim controller. The games most impressive feature is how immersive it is using the PSVR gun peripheral. It makes the whole experience incredibly immersive, tactile and you can feel every shot you make.

Aiming is a joy and the tracking of the VR headset and Aim controller is superb. The soundtrack and announcer can get a bit tedious and repetitive, but this is only a small annoyance. I do also wish you could walk faster and there was slightly more variety to the room layouts and aesthetics. If you have an Aim controller and like environmental puzzles, you will really enjoy this quirky VR title. ChromaGun VR is a good puzzler, and a fun game to boot.

ChromaGun is fun, very immersive and tactile, especially when using the Aim controller. The tracking is great and puzzle design is creative. Despite the sound design getting repetitive and the plain aesthetic wearing thin, overall I enjoyed my time with this neat little puzzler.