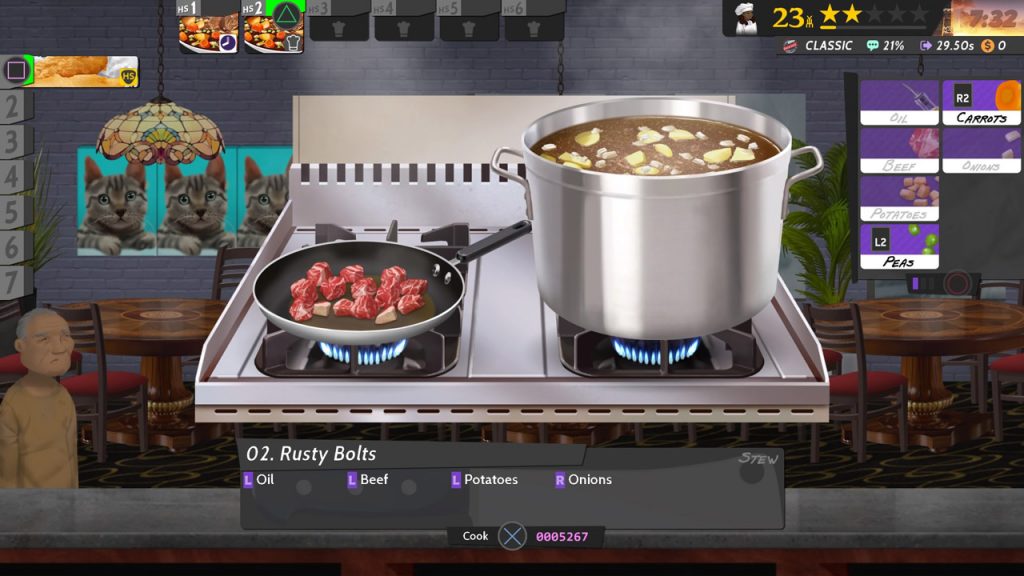 Before I became fabulously wealthy from being paid to review videogames for PSU, I started up my own café with my partner which we ran for four years in Bristol, UK. The romantic dream of running one’s own café became a reality for us and with it came the relentless cleaning chores, long hours and low pay that no-one warned us about. Actually they did, but we didn’t care as it was too exciting.

Well, Cook Serve Delicious 2 brings all of the above to a joypad near you so you can experience first-hand (well not really) how small-scale hospitality will crush your soul and add years to your life as you struggle to keep the customers happy.

Cook Serve Delicious 2 is the first outing on consoles for the restaurant sim after the previous release in 2012 on Steam. The second edition now boasts over 180 different meals for you to prepare for your ever demanding customers. You can work in your own customised restaurant or as a chef for hire in any of the 30 other eateries residing in Teragon Tower.

The well designed tutorials guide you through the basics – how to prioritise orders, bulk prepping food in holding areas ready for service and how to deal with vermin, toilet cleaning, washing up and comedic armed assailants.

Once you’ve absorbed those rudimentary skills, you can jump straight in and start working for the first restaurant ‘Max Wiener’, serving hot dogs, pretzels, corndogs and nachos.

Each meal requires a combination of complex button presses, for example Square, then L1 or R1 in conjunction with the buttons corresponding to the correct ingredients. Any mistakes in the prep routine result in a ‘bad order’ losing you rep and your multiplier. To begin with, it’s an absolute nightmare and you’ll struggle to keep up with the relentless jobs. A few plays in though, you find your rhythm and soon most orders become second nature.

The nearest equivalent on PS4 is Overcooked but with CSD2, the slapstick approach of physically moving around a kitchen is replaced with a static button and brain juggling nightmare. Your unfortunate character is tasked with doing every single job through a variety of button combos and initially this seems as arduous as a session at Starbucks in Leicester Square on a Saturday morning.

Main dishes and sweets are hugely varied, the more lucrative ones taking several stages of detailed preparation with plenty of room for error. You can still serve a dish with the wrong ingredient in but you’ll lose your chance for a gold medal. Medals unlock more restaurants for you to work in, along with furniture, decoration and recipes for your own restaurant which you can redesign as you accumulate increasingly swanky accouterments.

Each ‘day’ in the restaurant lasts around 5 minutes and you’ll barely have time to blink for the duration as you’ll be run ragged trying to keep up with the speed of the orders. The ‘Rush Hour’ warning flashes up before lunch and dinner time and you’d better have fully stocked holding pans otherwise all hell will break loose when the customers pile in.

The clientele in the budget diners are a wretched bunch, propping up the bar in their dirty clothes while you’re frantically trying to cook their chicken nuggets. As you progress to higher class establishments, they smarten up but don’t look a great deal happier.

The food has been lovingly rendered in great detail with over-saturated colours reminiscent of 70s food photography. It’s unlikely to make you hungry as you won’t actually get to see the food or the customers for more than a fleeting moment. Most of the time your eyes will be fixed on the top left of the screen in anticipation of the next order appearing on the list, and then across to the right to add the ingredients.

While the basics of the game are simple, there’s a lot of depth here with the extensive range of foods and decorations for you to unlock and add to your own joint. Completing the 350+ levels as a chef for hire is a gargantuan task, particularly as the complexity of the meals increases. Fortunately, the new local co-op mode means you’re not on your own. Teaming up with a friend via split screen means the cripplingly difficult later levels are more manageable – strength in numbers means the fun factor increases too.

As someone who has run their own café, I felt that there were a few improvements which could be implemented in future editions of CSD. I was hoping there might be the option to step up from kitchen lackey after I’d accumulated plenty of experience, with the option of employing staff, doing rotas, choosing different suppliers, designing a shop front, booking entertainment and franchising my business out to make more money. I guess that’s potentially a different game but it’s something which would add another element to aspire to after sweating like a pig in the kitchen.

As it stands, there’s not a great sense of progression within your own outlet as it’s pretty busy from the off. You do earn ‘buzz’ with consistently good service, but it doesn’t translate into any real growth which any café owner aspires to.

Upgrading the quality of food and the decor is the only way to go and even then, there aren’t enough slots for a full menu and the limited space (one screen) for designing your ideal restaurant is extremely limited.

Cook Serve Delicious 2 has been lovingly put together by Vertigo, and for anyone looking for a taste of how manic a job in hospitality can be, it’s highly recommended. You’ll find it hard to put the controller down once you’ve got into the swing of things, although the 1000 yard stare kicks in after about an hour, so it’s best played in short bursts.

Food lovers are in for a treat too, as you’ll be introduced to a host of international recipes during your tenure as a chef for hire and get ideas for what to make for dinner in the process.

A deliciously compulsive simulation of a busy restaurant which tests your mental agility and finger dexterity to the full. Humourous presentation and the couch co-op are the icing on the cake.