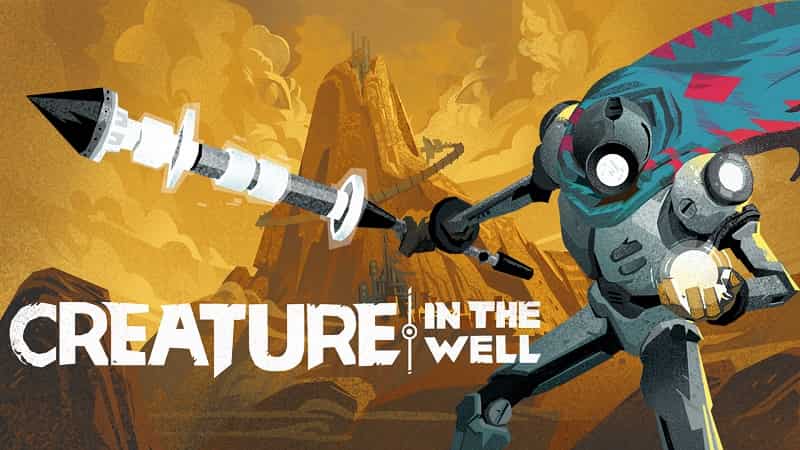 At the time it seemed like a uniquely wonderful oddity that Swedish developer Villa Gorilla was able to achieve with Yoku’s Island Express, a pitch-perfect marriage of classic 2D platforming and pinball game mechanics in a way that we just hadn’t seen before. Well now we have another indie pin-balling genre mash in Creature in the Well, a decidedly more melancholy effort which leverages pinball in an entirely different genre – the top-down hack and slash dungeon crawler.

Creature In The Well PS4 Review

An Expertly Judged Fusion Of Hack And Slash And Pinball Mechanics

Indeed, even upon booting up Creature in the Well, it soon becomes apparent that pinball commonality aside, it couldn’t be more different from Villa Gorilla’s decidedly breezy studio debut. As the last remaining BOT-C unit, players find themselves venturing to the city of Mirage which finds itself isolated from the rest of the world on account of a terrifying sandstorm. Tasked with restoring power to an ancient facility that also happens to be dwelling of a mysterious, yet hateful creature, Creature in the Well’s sandy, dust-choked locales couldn’t be farther away from Yoku’s bouncy, saccharine sweet and colorful aesthetic.

Viewed from an elevated, almost top down perspective, players must restore power to this ancient facility under the mountain by going from room to room and gaining power. Power is essentially the currency by which everything happens in Creature in the Well. If you need to open doors or re-charge old cores to upgrade your BOT-C unit, all of it takes power to do so and this is where those pinball shenanigans come in. When you’re not recharging your health in glistening silver pools, uncovering hidden loot or being talked smack at by the titular Creature in the Well, you’ll be in one the game’s many challenge rooms doing your power collecting thing.

Here, rather than smacking enemies to death in other dungeon crawlers like Diablo, you instead gain power by swatting balls of energy into a range of chargeable apparatus (that just so happen to look like pinball bumpers, switches and flippers) which in turn provide you with precious and much needed power. Where things get a little deeper however, is in how developer Flight School Studio not only melds pinball with its dungeon crawler template, but also in how it seeks to challenge and punish overconfident players as well.

Rather than just encompassing rooms that are exclusively full of chargeable apparatus, nearly every chamber found in Creature in the Well also contains its own fair share of turrets, traps and other obstacles that are built to stymie the player – and each blends into the game’s design DNA beautifully. The turrets for example, dish out hefty damage, but when incoming hurtful rounds make their way over to you, they can be deflected, turning them into ‘friendly’ cannons that fire regular energy balls that can be used to gain that much needed power.

You have to be careful too, as projectiles that become immersed in flame after passing through a force field can hurt you on the rebound and naturally, many of the game’s fiendish rooms are constructed to maximise the unfortunate likelihood of this effect, in addition to leveraging the employ of a wide range of traps, bombs and other such damaging gotchas.

However in Creature in the Well, you’ll find that your main opponent isn’t the snarling, insult-spitting, feline visaged titular creature but rather time itself, as many of its rooms are built around timed challenges that must be completed lest the puzzles reset themselves. Still, despite the seemingly cold geometry that is threaded through Creature in the Well’s many pinball orientated conundrums, it still never fails to elicit warm satisfaction when you conquer an especially troublesome challenge using a combination of speed, accuracy and successfully predicted trajectories.

Then you have the boss fights. For the most part, the Creature is quite content to strike at you from the darkness – often pulling your platform down to his level and attacking you with all manner of traps, bombs, plasma orbs that represent everything you’ve learned to deal with up until that point. Quite straightforward for the most part, these boss fights are hardly grand challenges in the early going, but later encounters with the beast are much tricker and require your reflexes and accuracy to be functioning as one in for you to succeed.

A neat little wrinkle to all of this is that our robotic hero can pick up and use different weapons to get the job done, as each one possesses different attributes that can help you through the game. One might replenish your health for every damaging red ball it hits, while another might allow you to charge the balls for an infinite number of times, providing a massive potential score at the expense of your own health, introducing a nice little dollop of risk and reward to the proceedings.

Obtaining these weapons isn’t quite as straightforward as one might think either, as the most powerful of these armaments can only be obtained from secret chambers that can in turn, only be opened by collecting the absolute maximum charge you can from particular challenge rooms – thus providing you with the added incentive to fo that extra mile.

Audiovisually, Creature in the Well is a delight and equally mechanically, it is something of a triumph too, it’s just a shame that it isn’t a more hearty treat. Able to be completed in between three and five hours and platinum’d in a little more over that, and without any additional modes or reason to return, it’s a crying shame that Creature in the Well isn’t larger than it is.

Sadly, another issue with Creature in the Well is the repetitiveness of some of its room layouts. Despite the fact that each of its eight distinct areas have been hand crafted, you do come across some of the same room layouts time and again which can be a touch disappointing considering how fresh the rest of the package feels.

Certainly, there’s nothing quite like Flight School Studio’s latest title and arguably, Creature in the Well’s tagline “Pinball with Swords” does somewhat undersell the myriad sophistications and complexities that the developer has managed to deftly weave into its design. Though a reduced duration and occasionally repetitive design do tarnish the final product somewhat, Create in the Well’s commitment to innovation and a wonderfully realised melancholy setting both help to elevate it further beyond its flaws.

Creature in the Well is out now on PS4, Nintendo Switch, Xbox One and PC.

Not since Yoku's Island Express has another title managed to extrapolate addictive pinball gameplay into something quite so unique. Creature in the Well is a delight - I just wished it had lasted longer and wasn't quite so repetitive as it turned out to be.

Creature In The Well