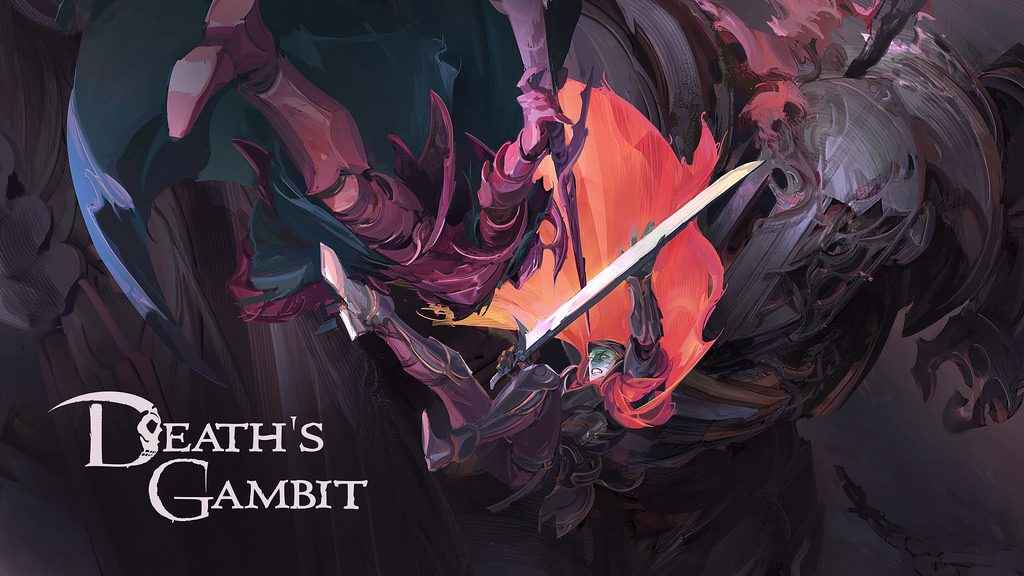 In fact, nearly every detail, from the way you level up, to the scattering of odd and memorable characters you’ll encounter, oozes Dark Souls, just in 2D retro-style goodness.

In this Death’s Gambit review, we’ll see if a 2D platformer is a good fit for a cookie-cutter Dark Souls game.

You take on the role of conscripted soldier Sorun, and come upon his apparently lifeless body being dragged to the pyre by an unknown creature, the ground still bloodied and burning from the battle that just took place.

Sorun sputters to life, stopping the man-beast Vrael from throwing him on the bonfire now fueled by his fellow soldier’s corpses.

Vrael tells him to go back home to Vados, but Death appears and offers Sorun a deal. The land they are in, Siradon, is full of immortals, and Death is cranky he can’t do his job.

His offer is a contract of immortality, in servitude to him, to vanquish the immortals in this land.

Not wanting to die just yet, Sorun agrees, and is off on Death’s journey.

Before the game begins, there is a bit of create-your-character, though it is not extensive.

It allows you to pick from one of seven starting classes. A standard Soldier, an Assassin, and even a scythe-wielding Acolyte of Death class, each one will offer different benefits and are suited to a different style of play.

The stats are straightforward, and don’t require much thought, which is nice. Want to wield heavy swords and axes? Go with a strength build. Want to be a wizard? High intellect is what you’ll want.

It’s simple and quick to build a badass however you like, so next of course you’ll want to jump right in and start killing this land’s inhabitants.

Like any good Metroidvania, there are plenty of areas to explore, and the map consists largely of one long area spreading west to east, with offshoots, hidden passages, and an underground Rider’s Tunnel that allows you to quickly travel by horseback.

Scattered around this land are Death statues, which act like the bonfires in the Dark Souls franchise.

Resting at these lets you level up, set different abilities you find, and manage your Phoenix Feathers.

These little feathers restore health to you when used out in the field, and can only be refilled at these Death Statues.

One nice feature here is the option to sacrifice feathers in order to boost your damage by 10% per feather. You can even carry no feathers into battle and rely solely on a boosted attack. This is a great way to approach the game for the best challenge, and will make it easier to get the Phoenix Chests which only open if you haven’t used a feather to heal.

This again is great because it allows you the player to decide exactly how you want to play. Paired with numerous abilities and equipment, you can create some very powerful combinations, such as siphoning enemy health and boosting cooldown.

My favorite build so far has been the Acolyte of Death. They can restore broken Death statues, and I geared him to be a secondary spell-caster, with abilities boosting Intellect.

I found a ton of fun combinations to play, and it made me reminisce fondly of Dark Souls.

Any fan of the Soulsborne games, who also loves retro-inspired Metroidvania action-platformers (i.e. me) will find plenty to love in exploring the depths of lore and different outcomes your actions may have.

It will be no easy task though, as the famed difficulty of the Souls franchise was injected into Death’s Gambit with a filthy ampoule the size of a turkey baster.

Fear not though, Sorun comes with a plethora of his own skills and abilities.

Playing as him, you’ll have your basic attacks with the weapon of your choice, as well as the ability to roll, jump, and block. You’ll also unlock new special abilities to use with your weapon of choice, which require soul energy Sorun gains from defeating enemies or from completing other tasks based on his starting class. Most of these can be learned from the characters Sorun meets in your adventure.

Using these wisely, and with more than a little rage, it becomes easy in no time to spam jump attacks and learn enemy patterns, but there are still times when multiple enemies attack at once, and the fray can quickly turn deadly.

The boss battles are fun and epic. The difficulty of these is on point, and it was nice of White Rabbit to put death counters under the boss’ names so you now exactly how bad you suck. Dying to a boss now has a benefit, as you are awarded souls based on how much damage you dealt to the boss. This is helpful if you need that one extra point in Finesse to deal the finishing blow.

Once you do finally conquer a boss, an option unlocks to have a “Heroic Rematch” with the bosses, something every Souls fan has always wantedAs much as I wax on about it being like the Souls games, there is a lot of uniqueness here to love. The gorgeous pixel-art graphics are mesmerizing, and the animations are superb. Death’s Gambit even features one of the best horse-mounting animations I’ve seen.

The levels are well crafted and made for exploration. The grimy depths, bloody rivers, and strange structures are each expertly crafted with all the love an homage to the Souls games the designers could muster.The locales are varied and beautiful, from snow levels to strange forgotten cities, I found more to love from the perspective of an RPG gamer than from a platformer.

I think this may be where Death’s Gambit falls short, as it can’t decide what it wants to be, but the sometimes lackluster platforming makes it obvious the focus was on environment and immersion rather than function.

It’s not bad, just not great. It satisfies an itch I’ve had to play a good 2D Souls game, but there’s not much else here to offer in the way of moving the genres forward.

Though it's not the best platformer, the story and environment alone make it a must play for Dark Souls fans and retro Metroidvania junkies alike. There's plenty here to enjoy, with plenty of replay value for those it hooks.