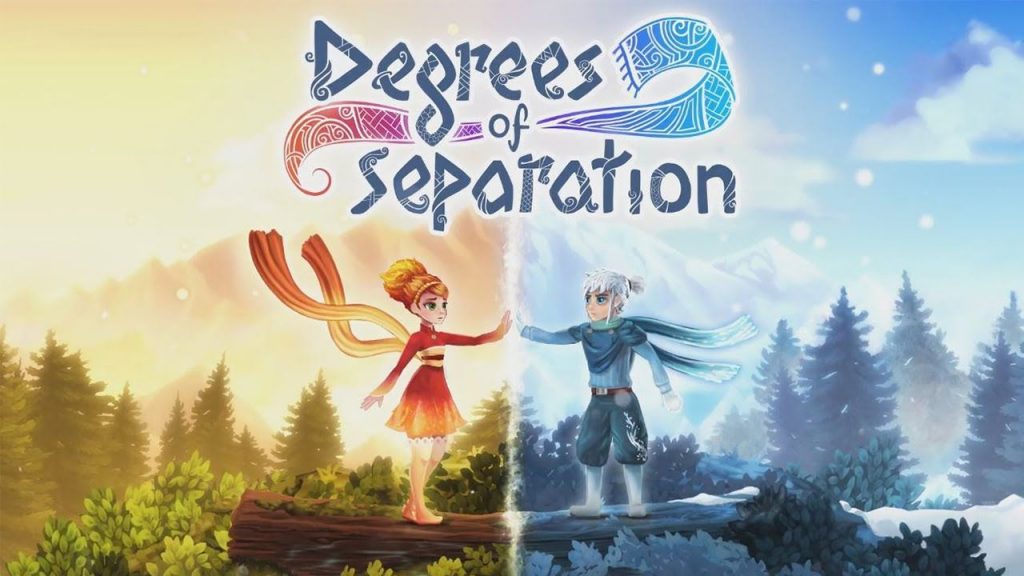 Degrees of Separation begins with two characters, Ember and Rime. Both are isolated in their own lives, holed up in their relative abodes. They both respond to a sense of urgency to leave in search of something. Shortly after leaving, they find each other.

The irony of their connection is how their very natures divide them. Ember, by nature, is heat-based, and Rime is cold-based. Once together, they begin a journey to another unknown pull.

Degrees of Separation is filled with potential

As a narrative, Degrees of Separation has a whimsical, youthful heart to it. Having a polarized aspect between the two characters adds a welcomed depth to this puzzler. However, the gameplay itself takes the forefront in negative ways that harbor so much of this game’s potential.

This game is gorgeous in its own way. Much like many 2D side-scrolling games, Degrees of Separation creates the illusion of a moving image for each character. I regularly likened the aesthetic to a less-hyperbolic Odin Sphere. What makes it even better is how the terrain changes color from a warm orange to a cold blue as the two characters move around each other.

The many puzzles are conceptually quite simple: Manipulate the world as needed to collect scarves sprinkled across the map. These scarves open locked doors, and each door requires a fixed amount of collected scarves before it opens. Use the hot-cold elements to trigger the environment to help you roll a snowball in the cold or trigger a geyser of air in the warmth. Learning the ins and outs of each character’s abilities can make this game worth the time invested for the right person as well.

This is where pacing becomes an integral issue throughout the entire game. Some puzzles are quite simple. Others are cumbersome and time-consuming.

Degrees of Separation is a couch co-op game. Potential for a good time is high when playing with someone you jive really well with, because this game highlights, and almost demands, teamwork. In fact, there were plenty of moments where the strengths of this dichotomy shined.

As with all relationships, the journey is what makes togetherness feel special. Special moments sprinkled throughout spark motivation to keep going more often than not. However, the pacing of the puzzles quickly diminish what those special moments created.

Aspects of these puzzles make things worse, but the biggest backbreaker in a lot of cases is how Ember and Rime cannot pass by each other. There is a divide between the two characters, and one cannot occupy the other’s state of being. This divide is completely 2D, so Rime and Ember cannot step around each other. This limitation adds a level of challenge in its own right. However, the amount of puzzles slowed down by this limitation contribute to the game’s overall pacing issues.

All in all, Degrees of Separation feels like a narrative template more than a story-based puzzler. A narrative accompanies you the entire time, but finding the heart of the game is entirely on you. Pacing is dripped intravenously between heavy bouts of tedious puzzling, leaving very small payoffs sprinkled very lightly. There is something special here, but a lack of focus and polish on the core concepts bring Degrees of Separation to a lukewarm middle ground that’s hard to overcome.

Degrees of Separation has a great deal of heart built into it. Ember and Rime bring a light but appealing dichotomy to the world that's fun to solve puzzles with. However, both narrative and gameplay pacing suffer greatly due to creative choices. In the right hands, Degrees of Separation could be a personal favorite. However, a great companion is required to overcome this game's frequent, repetitive shortcomings.