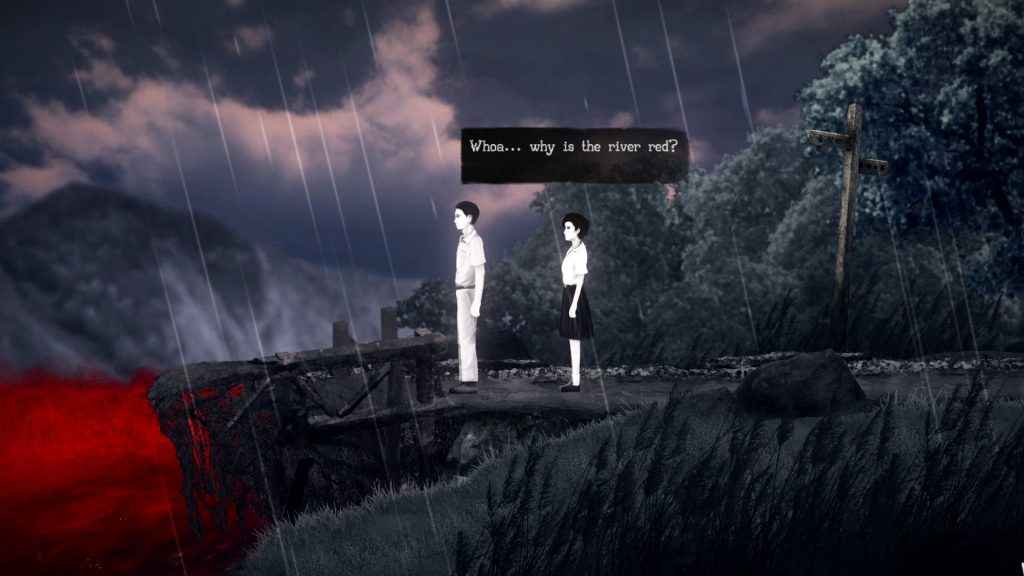 Detention looks to teach the horror game genre a lesson with a fascinating, atmospheric 2D survival horror tale that integrates Taiwanese folklore and a setting many of us already found horrifying, school.

Detention is set in a semi-fictional version of Taiwan in the 1960's. The country is under martial law and is generally already a fairly gloomy place to be. The game begins with a boy narrating his way through a class at Greenwood High, a school way up in the mountains. The boy slumbers during the lesson, and awakes to find the room empty, and suspects there was an evacuation because of an imminent typhoon.

He soon finds he is not alone, as a girl has also been left here. The pair look to leave, but find the only exit is destroyed, so instead they look to take shelter at the school. From there, things get weird. Without warning, the world changes, and evil spirits roam the school. Can these poor students escape this newly birthed hellscape? That's what we're here to find out.

While Detention is a survival horror, it's not one to indulge in combat. You still get the puzzles, the tension, and fear of the unknown, but we're leaning very much into the dark realm of psychological horror with political overtones. At heart, Detention is a most like a point n' click title, as that's pretty much what you do throughout. You solve puzzles by finding and combining objects, and collect information about the harsh political landscape that has led to the way Taiwan is run, and the odd bit of mythology and folklore to help give more credence to the horrors you will endure. While it's not entirely important to know this information, it does wonders for building this alternate world into something believable (aspects of it are based on actual history and mythology).

There are enemies despite a lack of combat, but your only means of dealing with them is avoidance, which, in a fairly novel twist, generally involves you holding your breath as you pass them. Of course, you can only hold your breath for a certain amount of time, so timing is everything, and these are the moments where a sense of unease ratchets up into sweat-inducing tension. There's no health bar to worry about (you can take a few hits and regenerate) and no other effect to take in account from interacting with the spirits, so they serve merely as obstacles rather than full-blown threats.

The playing area of the school isn't a huge one, and only certain places and rooms are accessible, so despite having a bunch of backtracking to do, things rarely get too maze-like and confusing. Puzzles are pretty straightforward throughout, and tie in with the storytelling quite well, with one or two exceptions that feel logical to a fault. While the navigation around it doesn't become taxing, the school itself twists and distorts the further you progress, crumbling, and deteriorating in a manner not too dissimilar to Silent Hill. The fantastically bleak, bled out, hand drawn art style becomes ever so slightly more vivid as the distortion snakes its way deeper into the environment.

That would be effective enough as a portrayal of uncomfortable horrors, but it's the use of sound that really drives home the unease. The soundtrack is less a musical score, and more a collection of hysterical stabbing crescendos of noise, shifting pace whenever appropriate. It's absolutely in keeping with the presentation of Detention, and truly creates tension and unease from seemingly innocuous situations.

The relative ease of traversing the game world coupled with a compelling story, means the desire to see it through to the well-executed conclusion is strong, but in the run up to Detention's finale, things get a touch messy, with the point being drawn out far too long, and while the actual end is good, its impact does feel somewhat diminished by the sluggish final act that precedes it.

That shouldn't detract from what is a compact and finely made horror story that draws on the terrors of history to give it a rather unique flavor in the realm of videogames. Detention is a smart, confident dose of survival horror, that only slips in a sagging final act because all that precedes it is so effectively done. Having a real life political history behind its plot enriches and informs without talking down to you, and like all the best horror, it serves as a painfully poignant message to the horrible truths of the real world.

The most telling thing to say about Detention is that it carves its own niche into the videogame horror genre. It shows a maturity and storytelling finesse for much of its brief run that eludes many within its medium. Despite a slump in the final act, and a couple of coldly logical puzzles that feel out of place with the story, Detention is a smart and sophisticated survival horror that draws from reality to fuel fear.