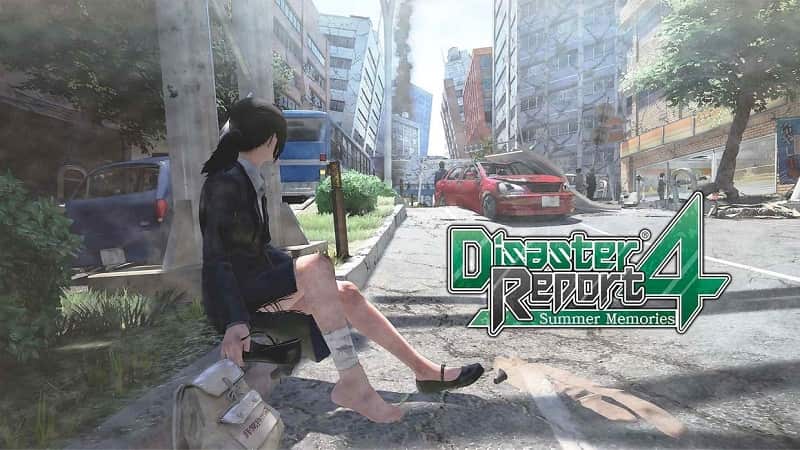 A lot has been said about recent releases being ‘timely’ given the circumstances in the world right now. Whether that be as a form of escapism from it (Animal Crossing), or because they show a stylized and somewhat relevant view of it (Resident Evil 3’s pandemic, Persona 5 and Final Fantasy VII’s battles against corrupt authorities and nasty pieces of work). In terms of relevance, one game exemplifies it more than the rest.

Disaster Report 4: Summer Memories is, on the surface, a throwback survival horror game that where the monsters are natural disasters (and naturally…people). Replacing handguns and herbs for goofy outfits, toilet breaks, and overpriced spaghetti bolognese.

Spend time with it though, and you’ll discover a game that’s as much about tests of character in a time of crisis as it is about melodramatic disaster movie homages and absurd costume changes. It constantly asks you what you would do or say in a believable and relatable time of chaos and panic. When it comes down to it, are you going to be helpful or hurtful in the most testing of times?

Disaster Report 4 knows all about testing times. It’s been 10 years since the game was initially revealed in Japan, and set for a PS3 release in 2011. Tragic real-life disasters in the country made it incredibly difficult to release a game with very similar themes, and as such, it was held back and for a long while, looked like it would never see the light of day. Thankfully, Granzella came in to save the game from oblivion, and seven years after it was first supposed to release as a PS3 title, it arrived on PS4 in Japan in a reworked fashion, sporting a VR mode to boot. Now it finally gets a Western release.

All Disaster Report games (you’ll possibly know it by a different name depending on where you live as it’s been also been known as Raw Danger and SOS The Final Escape in the West) follow the same basic concept. A third-person survival-based adventure where you the player escape from devastating natural disasters in fictional Japanese cities. They’ve never been about combat and confrontation like most survival-based titles seem to end up being, instead, the survival is the focal point as you try to battle against more grounded foes such as thirst, hunger, and tectonic plates shifting in a catastrophically awkward manner.

Disaster Report 4 is no different, although it puts a much higher emphasis on your actions towards others during your attempts to escape a devastating earthquake. How you survive is largely up to you (albeit in a scripted choice-based manner), but there are plenty of other people enduring this crisis, and some will require your help if you’re to get anywhere. You’ll wander into certain situations and be presented with a selection of dialogue choices that may or may not branch out into a new path to potential freedom.

These dialogue choices range from honorable and brave to downright deviancy and selfishness. Even during the character creation section at the start, you’re asked a bunch of personality-setting questions such as how you’d react in a crisis, who you’d look out for, and the like. There’s a points system for how moral you are (or aren’t) during your playthrough, and there are different outcomes to certain story beats depending on how you treat people, but you aren’t really punished for playing it one way or another.

The system mainly exists to prod you into doing the right thing (after all, the first response choice is nearly always the most righteous one), but if you want to play as a disturbingly inappropriate horndog then have at it.

It would be easy to take the low road if there wasn’t a shred of anything worthy in terms of sympathetic plights. Handily, Disaster Report 4 makes a decent fist of making you care about situations, even if the narrative tools used to get you there can feel a tad basic and manipulative at times. Not all the time, but still made me roll my eyes on occasion.

It works though because rather than make everything about saving babies and rescuing pets (though it isn’t averse to dipping a toe into such scenarios) the focus is on more personal stories. One of the first people you encounter is a teacher, new to her job and worried about missing students. Through conversation with her and the students, you learn that the relationship between teacher and students is unsteady, but finding out their teacher is looking for them changes their outlook.

Later there’s a recurring character who is out to make a quick buck out of the current crisis and the feeling of helplessness about what they are doing resonates through the game’s lack of combat. In any other game, you’d probably strong-arm such a heel and put an end to their despicable ways. Here you can rumble them, but it doesn’t stop them from running off somewhere else and doing it to others.

The stories are pretty much all about the hope and hurt caused by humanity when the chips are down. It’s all rather somber stuff, but Disaster Report 4 allows for a bit of humor alongside the heartaches.

Some interactions let you indulge in some silliness, and the collectible costumes you can find on your adventures throw up some amusing situations and dialogue. At one point I opted to have my normally sympathetic avatar react to a man’s misery at being torn away from the love of his life by half-listening and picking my nose. I conducted an Agatha Christie-esque investigation into an arson whilst dressed in a chef’s hat, baseball gloves and the schoolgirl outfit of the accused’s girlfriend.

You could argue it takes away from any emotional impact of the situation, but honestly, Disaster Report 4 would be a dry old game if it didn’t allow for such childish levity now and again. I’ve spent much of this review championing a particular side of the game because it may be hard for many to look past Disaster Report 4’s many technical failings to see all the satisfying and highly enjoyable drama and absurdity underneath it. The series has never exactly been one noted for its looks and performance, and with this beginning life as a PS3 title that should have released 9 years ago, it’s often painfully clear how rough and ready it can be.

The character animation is rather rigid and simplified by modern standards (although in fairness, this simplicity means fewer ways to go wrong) and the visual presentation barely looks evolved from the PS2 entries in the series, with a framerate to match. While that does lend Disaster Report 4 a certain B-movie charm, it gives off a lousy first impression. The third-person camera is erratic in tight spaces, which doesn’t help in panicky situations where you’re navigating multiple floors.

There is at least a first-person viewpoint you can switch to, but even that feels strangely confined, only really useful in open spaces where you wish to take in the environment. The game really suffers whenever too much action is happening onscreen. During a moment where a large crowd screamed as a building crumbled in front of them, the framerate took a pretty significant hit.

I can accept certain design choices given the troubled development. Block me off with an invisible wall or a knee-high obstacle? That’s perfectly fine. Give me vague ideas of what I’m supposed to be doing next? Kinda refreshing!

Other things, however, are less forgivable. Resource management is, without doubt, a bit of a throwback, but Disaster Report 4’s system is uneven. I found plenty of the game’s collectible compasses and costumes, but the essential things such as food and water are, somewhat understandably, much harder to obtain. Makes sense, sure, but after two in-game days I had found exactly one drink and 90% of the food I got game from fraudulently acquiring a tidy amount of Yen to pay for overpriced corner shop grub (and the Spag Bol I mentioned earlier, but honestly, I’d happily overpay for a nice Spag Bol in any situation).

A lack of object interaction in the overall game world means that it seems even more ridiculous that you can’t easily obtain more nourishment through fair means or foul. I brought together a warring town thanks to my expert sleuthing and kindness, but I couldn’t get any of the multipacks of bottled water they had hanging around their makeshift soup kitchen. Inadvertently this absurd situation made an amusingly relevant point about the way things go during a time of crisis. You can have plenty of money but it’s worth bugger all if you can’t even obtain basic provisions such as water because some git has stockpiled it for themselves.

The only real modern touch to Disaster Report 4 is in its VR mode. It works surprisingly well with the low-fi visuals, showcasing a selection of the set-piece moments from the main game. It’s a fun throwaway addition, but it’s not really much more than that sadly.

Despite its problems, Disaster Report 4 held my attention throughout. I think its relative clunky simplicity works for it. There’s no doubt it’s a messy-looking game that has stepped through a wormhole in 2005 and arrived here today, but that’s partially what endeared me to the series in the first place. It is why I can still play the ridiculously rough and hammy SOS: The Final Escape now and still enjoy it.

These games capture the essence of classic disaster movies and add a big dash of extra levity. It may technically be from another time, but its handling of certain issues couldn’t be more timely. While it does show the darker side of life in a crisis, it’s also about the hope, perseverance, and sense of community that can spring up during these times, and the ability to have a laugh now and again even when things look bleak.

Disaster Report 4: Summer Memories is out now on PS4.

Disaster Report 4: Summer Memories is not the most refined game you’ll find in 2020, falling short on multiple technical levels, but its blend of personal dramas and crisis management with slivers of wit and absurdity makes for a surprisingly impactful disaster movie-inspired experience that is arguably one that’s difficult to find elsewhere.