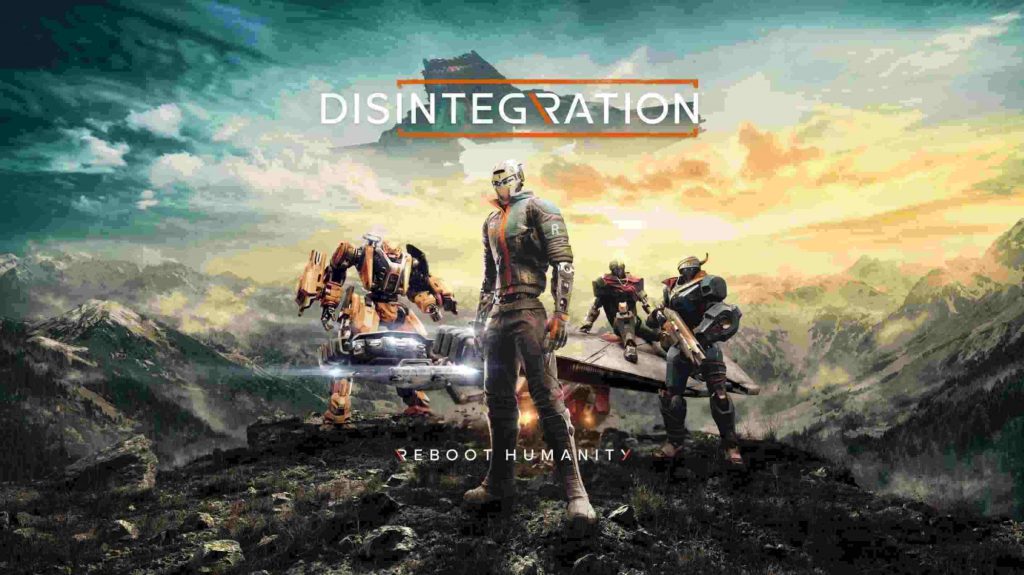 Disintegration is one of those games that looks great in trailers and is filled with great ideas. But when you actually get it in your hands you realize that all these great ideas are never fully realized. In fact, most of the game mechanics work against the overall experience.

A Surprisingly Lengthy Campaign With Plenty of Dialogue and Cutscenes

Disintegration tells the story of humanity on the brink of extinction from disease and natural disasters. In order to keep themselves alive, humanity has found a way to integrate their minds into robotic armatures. You take on the role of Romer Shoal as he escapes from a massive prison in the sky with a small group of rebel forces.

The prison acts as a rehabilitation center where the evil Rayonne forces are trying to recruit all converted armatures in a bid to wipe out the last remaining humans on the planet. Romer and his friends set out to sabotage the Rayonne forces and liberate capture camps, destroy compounds, and secure pivotal strongholds. The story doesn’t really reach the high points that I was hoping it would. To the developer’s credit, they clearly put a lot of thought and resources into the campaign though.

The campaign is full of cutscenes and plenty of dialogue. One of the highlights is the constant conversations I would listen to during missions between my various teammates. You don’t get to decide which teammates you take on each mission and that’s actually for the better. The game selects specific teammates for you to help you deal with the obstacles ahead.

Though I know some people would prefer to have the freedom of using the units they want, I actually preferred this method a lot more as it stopped me from having to restart whole missions because I took all close range teammates against long-range enemies for example. Missions can also take quite a long time to finish. In fact, I don’t think there was a mission that didn’t take me less than 40 minutes to complete.

The gameplay is where Disintegration shows a shade of something unique but never realizes it to its full potential. Romer takes control of a cool Gravcycle. A big hovering bike armed to the teeth with machine guns and shotguns. The Gravcycle is fun to use as you can ascend, descend, and fly around the environment while taken down dozens of robotic foes.

The problem comes, when the game forces you to play as the overlord in a real-time strategy game. Disintegration is a hybrid FPS/RTS title. While you control the Gravcycle, you also have to control your teammates. Your teammates remain on the ground with you providing specific commands occasionally; but for the most part, they act on their own.

You only really have three commands you can give your teammates. Focusing their attacks on a single target, moving to a designated location, and using a specific ability unique to each individual unit. Unfortunately, none of these three commands work in your favor. Telling your teammates to move behind cover almost never works. Sure they will go to where you tell them, but they won’t stay there. They constantly move out of cover and move around. The same goes for abilities.

The teammates will get the ability off, but there were plenty of times where I would ask them to use an ability and it would take them a good five to ten seconds to pull off the move because they have to constantly get into position. Why can’t you throw a grenade over a truck instead of moving around it exposing yourself to enemy fire?

Each campaign mission is fairly big with a lot to explore, even though Disintegration’s missions are linear. Exploring will put you up against some hidden foes but also allows you to find mechanical parts and upgrade chips. One of the coolest aspects of Disintegration is the destructible environments.

There is nothing like bombarding a building housing a bunch of enemies and watching the walls crumble away from your gunfire. Destroying cover is also one of the best ways to expose your enemies, but you have to be careful as your teammate’s cover can also be destroyed. Enemies are also destructible. Though you can’t shoot off parts of your robotic foes, you do get to watch them explode in various pieces which is also quite satisfying to watch.

There is a progression system here but it isn’t anything worthwhile. You can collect the aforementioned mechanical parts from defeated enemies and hidden stashes as well as upgradable chips. The chips are used to increase the stats of your teammates and your Gravcycle.

For the most part, they are all the same for each character and unit. Upgrades include increasing how much damage they do and how much health they have. The Gravcycle is the only one that varies in upgrades, such as shortening the respawn time of downed allies.

Graphically Disintegration doesn’t really pull out the stops. The world itself has a nice Fall and Winter setting. The brown and golden colors are nice to fly through but the world itself isn’t very detailed. Most of the locations are big open areas with nothing but trees and rocks to populate them.

There are some locations such as desolate towns and factories to explore but they are few and far between. It’s by no means a bad looking game but it does at times feel a little bland.

Multiplayer Can Be Hectic, But Doesn’t Add Enough Variety In Maps and Modes

There is, of course, multiplayer, and though I hoped the multiplayer would add a lot to the title it simply takes what you can do in the campaign and puts you up against other players. There are three game modes Zone Control, Collector, and Retrieval.

In Zone Control you have to hold a specific location for as long as possible. It’s essentially Domination seen in other titles. The spin this time is you yourself cant capture points but must use your ground squadmates to do so instead. Collector is essentially Kill Confirmed. When defeating an enemy you must collect their brain components to score points. The last mode, Retrieval, is like Capture the Flag except one team acts as attackers and the other as defenders, you must capture cores located on the map and return them to your base while the defenders try to stop you.

Sadly there aren’t very many maps to play through at launch and at some points, I ended up playing the same map three or four times in a row. One of the cool things about multiplayer is being able to choose different teams with their own unique looks such as cowboys and samurai. You can’t mix and match them unfortunately so you can’t have samurai on the same team as cowboys but you can customize their colors. Though I liked the unique options, I did find it hard distinguishing between my teammates and my opponents.

The battles can get hectic with a lot of explosions happening on screen so I found myself switching over to my healing gun and healing as many people as I could because I had such a hard time following the action in Multiplayer.

A Game That Isn’t Quite Fit For Purpose

Disintegration is just another example of a game that’s full of great ideas but isn’t able to execute them as well as it should. Blending an FPS and an RTS sounds great on paper, but clearly the developers didn’t give enough time to either one of these genres. Disintegration isn’t a bad game by any means it’s just a very simple and safe attempt for V1 Interactive‘s first title.

Disintegration is out now on PS4, Xbox One, and PC

Disintegration's blend of FPS and RTS is an interesting one, but unfortunately it fails to fully deliver on both. It's a competent game and can be fun at times, but most of its mechanics fail to work in the simplest of ways. Maybe with a little, more time Disintegration could have been something special.