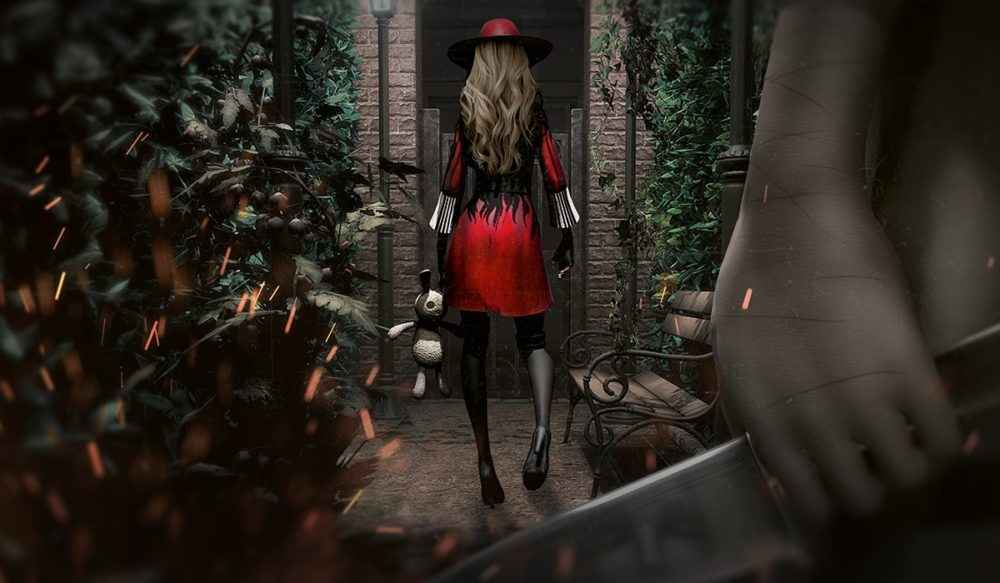 Film noir has an appeal all its own. It harkens back to a style filled with palpable drama if executed properly, and SOEDESCO’s Dollhouse attempts to do just that. This kind of potential, when compared to the finished product, feels like trying to get a Gordon Ramsey-grade dinner at McDonald’s.

The point of Dollhouse is simple: Recover Marie’s memory fragments, use them to open up locked doors, piece her memories together, and collect keys to continue to the next randomly-generated maze. You also have to do all this while not being killed by mannequins or It, your invincible, deadly pursuer. You piece the story together by collecting movie reels filled with your memories and piece them together into one final cut. The most unfortunate part about this premise is that while it sounds good on paper, the execution is seemingly anything but

One thing I truly respect about Dollhouse is its aesthetic. At all times, it embraces that film noir style all the while inching so close to that classic Bioshock look and feel. The world itself is all black and white, with key items appearing in full color. This makes identifying crucial collectibles quite easy, and it compliments the dark tones well.

Early on, the effect from mannequins imitating Doctor Who’s Weeping Angels reeks of shock value in the best way. Turning around or rounding a corner to see a mannequin frozen mid-pursuit creates that sense of dread not just from what you see but what you do not see. However, so many gameplay elements soon neuter any of this horror appeal and replace it with frustration and tedium.

I begin with controls. In short, movement in Dollhouse is awkward. The range of camera sensitivity shifts quickly as you adjust it. At middle speed, the camera zooms around like it’s at sensitivity 1 in Call of Duty. At the lowest setting, it takes nearly 20 seconds to do a complete 360; with these results, I had zero interest in trying full sensitivity. L1 and R1 allow you to look over your shoulder. This comes in handy often, but it lacks any real tension. Instead of the point-of-view whipping around, the camera simply cuts to looking over your shoulder. It makes Marie feel unnatural rather than a living breathing person with full motion. There is no drama in this.

After dealing with the camera, the act of moving around becomes the next toil. The random mazes often have a number of things on the ground that prevent your progress. I’m not referring to the easily-discernible merry-go-rounds or benches or buckets either, but rather random divots that just stop you from moving forward. Then you have to stumble back a bit to get around them. In a game where your invincible pursuer constantly chases you, let it be known that getting caught because invisible deformities in the map held you up is nothing short of frustrating.

The maps themselves offer very little variety when it comes to scenery, with the same maze walls made up exclusively of shrubbery repeating themselves over and over. Within these walls, you must collect different amounts of film reels and keys, with mannequins, pursuers, and the copy-paste landscape all hindering your progress.

The frustration compounds on the fact that dying sees your items, memory reels, and experience dropped on the spot. You have the ability to recover your lost resources where they fell, but another death without recovering them results in those resources disappearing forever. Upon death, you find yourself at the beginning of the maze, and the sameness of the landscape offers zero help in finding your way back to your body.

Marie does has the ability to use chalk to write symbols on the wall, which can help you keep track of where you have been. However, with so many different items and locations to keep track of–all while in a randomly-generated maze–getting around quickly becomes a chore for the wrong reasons.

Dollhouse offers one interesting, yet limited helping hand. Marie can occasionally see from It’s perspective, and doing so lets you track where key items are located on the map (yes, seeing “It’s” threw me off as well, as that technically-correct usage appears often in the quest tracker). Lingering too long in this perspective gives Marie’s position away to It, but the rewards for doing so help you get around much easier. I honestly found myself using this more often than I probably should simply because navigation was far too cumbersome to enjoy.

Dollhouse does offer one game mode that helps get the game over with rather quickly, called Voyeur. This mode eliminates any challenge, preventing Marie from dying and enemies from attacking. Voyeur offers a quick way to get to the end of the game. In doing so, the few good elements of the game are taken away. Even with zero resistance, the completed memories offer little payoff.

And then there’s multiplayer

On four separate occasions, I hopped into multiplayer in hopes of testing out what Dollhouse had to offer. However, I only had one other player join across all four of those attempts, and a match requires 8 players to begin. I sat in each lobby for 30 minutes each time with no results, and I tried playing in the first week after Dollhouse launched. After playing the campaign, I imagined that multiplayer would be a fast-paced, deadly game of Red Light, Green Light while trying to escape. That honestly sounds cool. Imagination aside, dead servers in the first week offer little hope for this mode’s future.

I looked into Dollhouse with excitement, seeing an intriguing noir horror game with a lot of potential. Plus, anything reminiscent of Weeping Angels belongs in my field of view (no pun intended). What I received fell so terribly flat, with copy-paste maps, cumbersome controls, and clashing ideas hindering the entire game, making the completed memories themselves a very unworthy payoff. This is far from a game worth its $40 price tag.

Dollhouse is out now on PS4.

Dollhouse takes good ideas and puts them behind clashing mechanics. The randomly-generated landscapes all look the same, causing many issues with navigating and retrieving much-needed items. This pool of ideas lacks cohesion, and the minuscule payoff makes the tedium feel like a complete waste of time. Very little works in Dollhouse's favor.