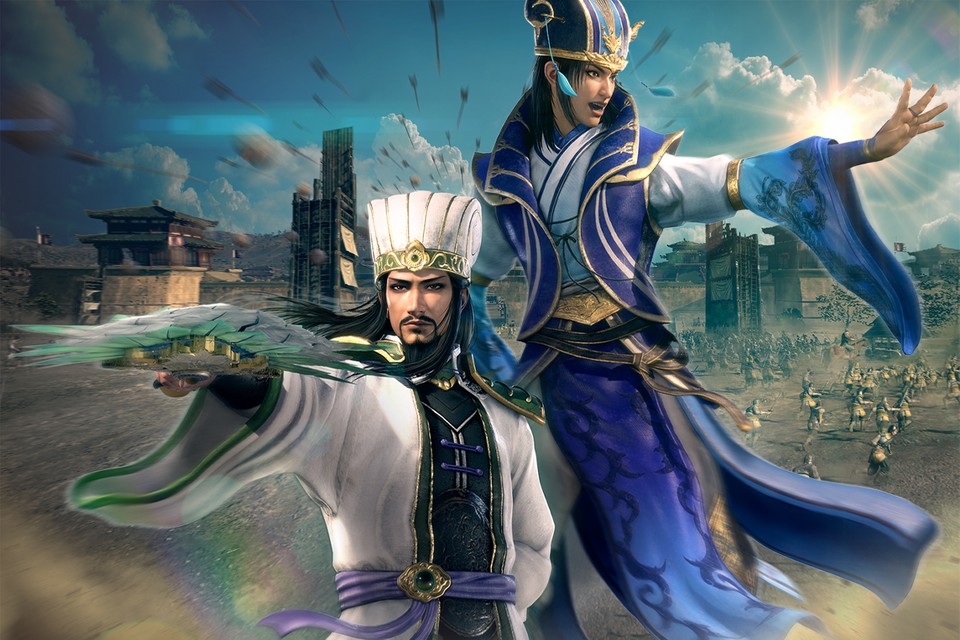 Dynasty Warriors 9 Empires PS5 Review. If one thing keeps Omega Force‘s Musou monolith strong it’s changing things up now and again. Bored of reliving Chinese history via the language of battering 50 poor soldiers at a time with a weapon that could take a house out? Well, how about we give it a Persona 5 flavor? Losing the enthusiasm for bullying Lu Bu once again? Stick a bit of Zelda in the pot. Tired of just smacking an entire army over and over? How about you take that tub of management sim over there and pour it all over this?

That last one is what Dynasty Warriors 9 Empires does. Yes, it has that original recipe Musou flavour to it, but now the player gets to build their own personal history and legacy over a distinct period of time.

A Combination Of The Good And The Bad

Taking the framework of 2018’s series soft reboot Dynasty Warriors 9, Empires brings along the good and the bad from what was an admittedly volatile shift in direction for the long-running franchise, but in streamlining the fighting side of the game, loses some of the positives of that to accommodate some deeper strategic aspects. The results of this ‘rebalancing’ are somewhat mixed.

You still begin from the Yellow Turban rebellion era and ultimately are out to conquer and defend in myriad skirmishes throughout the land. The difference now is there’s much more to it. The story is shaped by the player’s actions more intensely than ever. Key to that is the management side of things, where players can take a hero and rise through the ranks of an empire, switch allegiances, overthrow governments, fall in love, and eventually forge their own empire that lasts for generations. 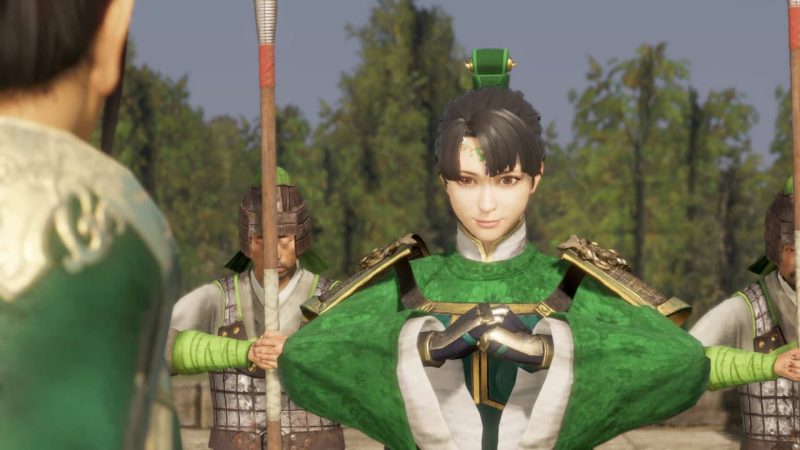 I started the campaign by creating my own warrior, a purple-clad swordsman with a nifty hat, and set off to recruit other wandering warriors to my own independent clan. Being a leader at this point meant I was in charge of deciding what our objectives were from month to month, building our reputation by completing such tasks as sabotage, spending time with soldiers to build relationships, doing grunt work for other kingdoms.

Eventually, I got noticed by the colossal king Meng Huo (who at this point, wasn’t crowned) and he chatted me up to join his growing army as an officer. After accepting his offer, things quickly changed. Now he set the monthly tasks and where to invade next, while only his most trusted generals could dare to challenge him on his decisions.

Each window of time between seasons is roughly five weeks (turns) and you must meet your leader’s demands by fundraising, scouting, procuring rations to keep the army fed, and more.

As the season draws to a close, there’s generally an invasion to fight in. This is where the game drops into more traditional Dynasty Warriors mode, with a trimmed-down version of DW9’s open map warfare that’s more in line with the older entries. Before diving into that though, there’s some battle prep strategy to handle. Here there’s options to kit out the player character in suitable gear, including weapons, stat-boosting gems (which can be obtained in the field), and even choose which trusty steed to ride into battle with.

Also offered up at this time is a battle plan. Either the player character or one of their brothers and sisters in arms can suggest a specific strategy for the upcoming fight. This can be as simple as taking out a few key enemies in a time limit or destroying siege weapons, but things do like to get a little fantastical now and then, with mystical bears and wolves, or gluts of mini-tornadoes scattering soldiers.

Pull the plan off and there’s a juicy boost to battle power in a variety of ways. Fail to do so, however, and it hands the enemy gains a little extra advantage. These plans can also crop up from enemy forces in battle, meaning the player is tasked with preventing whatever crops up before a timer runs out, with the same rules applying for success and failure. 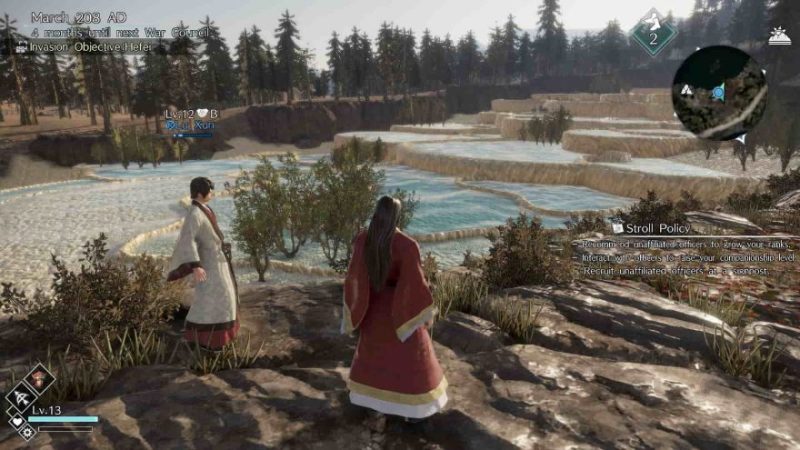 This is the crux of any evenly-contested battle, but when numbers are against you, a good plan can be the difference between an unbelievable victory and a debilitating loss of soldiers and land. When I finally succeeded Meng Huo as leader, I quickly found out how crucial strategy would be.

When in charge, there’s a real need to keep an eye on rations and recruitment, as without healthy amounts of both, the chances of expanding an empire to its all-conquering final form gets tougher and tougher. Each time foes attempt to take land back off you costs soldiers, and without consistent recruitment, there’s a real chance you can end up in battles where you’re massively outgunned.

You can leave those skirmishes to your soldiers, but the temptation to lead from the front often outweighs that option. It’s usually a thankless task that sees you sent back home with your tail tucked firmly between your legs, but scraping through against the odds is a genuinely exquisite feeling.

The downside of not managing things exactly right is that coming back to a position of strength is difficult without suffering substantial loss first. Most of the time I found myself stuck in a perpetual loop of fighting off invaders and being without the resources to grow my army and invade others. 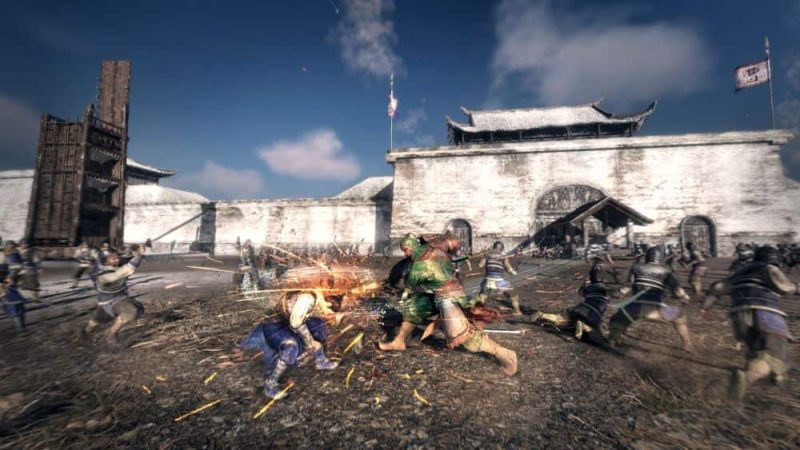 It ground progress to a halt, and the smattering of combat encounters grew into a seemingly never ending procession of fighting more powerful foes as my numbers dwindled. I did fight back, but it took not caring about lost land and resources while trying to recover just to reset things to where I wanted them to be.

It was during these drawn out slog moments that it became easier to pick at Dynasty Warriors 9 Empires’ other issues as I was exposed to them on a regular basis. When Dynasty Warriors 9 came out, it sacrificed visual quality for an open world, and while that wasn’t forgivable for some, I felt it was a worthwhile gamble to freshen up the series.

Dated Visuals Even On PS5

Here, maps are reined in back to pre-DW9 levels, but still look poor from a technical standpoint. The PS5 version I played looked near identical to DW9 on PS4, and in the case of some very smidge background textures, worse. It doesn’t even manage to run smoothly either, with stuttering frame rates, and grim glitches in the scenery.

It’s unfortunate because the menus are sleek, simple, and kind of classy, then you head into the game and it often looks far below what I’d expect of a Dynasty Warriors game on PS5. I can understand the sim aspect of this game playing a part in cutbacks to the DW9 experience, but with the amount of compromises on show, it could have surely performed better than this?

If you can ride past these issues, there’s an undeniably compelling game to be enjoyed. It’s very cool to end an era on top and then hand the keys to the kingdom over to your heir, who you then control instead. The whole idea of legacy you have such intimate control over is such a perfect match for the factual history of the rise and fall of empires that runs through this series’ bloodline. I just hoped it would be presented in a stronger manner than it is.

If Dynasty Warriors 9 was the volatile reboot the series desperately needed to endure, the Empires is proof the mixture isn’t quite settled yet. What Empires adds in terms of being an engrossing strategy sim, it loses in paring back its open world warfare to something that feels far too much like the series back at its worst. Persevere with its shortcomings, though, and Empires can bring you riches.