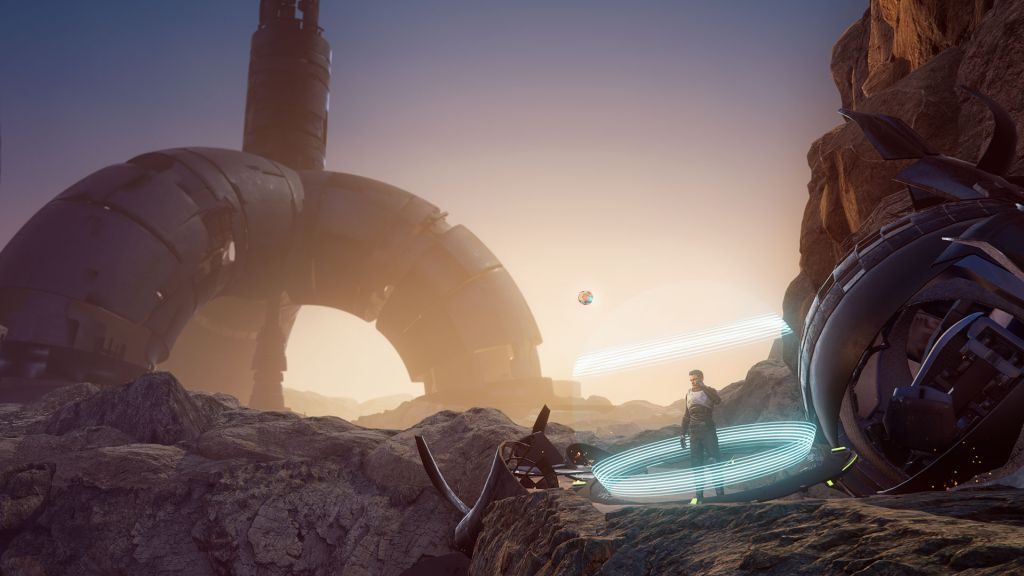 Eden Tomorrow is science fiction from another era. It is gentle and deliberate, and would have done well to lean in to its story, and back off of the puzzles and obstacles.

Eden Tomorrow Feels Like A Film From The Early ’70s

I was a child in the 1970s. I have always loved science fiction, and even as a small boy I would beg my parents to take me to the theater to see the occasional sci-fi film that would make it into wide release.

In 1977, a clear line in the sci-fi sand was drawn with the release of Star Wars. After the release of George Lucas’ rollicking epic, science fiction films became special effects-driven events. They were fast-paced, with laser guns and dog fights and wild alien designs.

But for a time before Star Wars, in the late ‘60s and early ‘70s, science fiction was different. It was quiet. Contemplative. Lone heroes would wander sterile environments, pondering their place in the universe and the nature of reality.

Films like Silent Running, THX-1138, and Fantastic Planet all share this subdued, other-worldly tone. And while I can’t say that I enjoyed watching any of these slow and ponderous films, they all stuck with me in some strange way. I didn’t like them, but I sure do remember them. There is a mood, a quiet strangeness about them that burrows in and takes hold.

That’s a good way to describe the way I feel about Eden Tomorrow. I can’t say that I enjoyed the act of playing the game. But after completing the five-hour story, I don’t think I’m going to forget about it any time soon. Something about the sci-fi story in Eden Tomorrow wormed its way into my psyche, and I can’t quite shake it.

So with that in mind, rather than launching into a tirade lambasting Eden Tomorrow for all of the things that are wrong with it, I would like to acknowledge some things that are good about the game.

Eden Tomorrow has an interesting science fiction story to tell. Though the story beats might be a bit familiar or cliché, and the game’s narrative leaves loose ends dangling all over your living room, Eden Tomorrow does manage to strike that isolated, sterile mood characterized by early ‘70s sci-fi.

The character design and animation for Newton, the player-character’s robot buddy, is pretty great. Newton can be irritating as hell, but he is a consistent and believable character.

Eden Tomorrow has some awesome creature design on display, and the monsters and animals that inhabit Eden Tomorrow’s alien environments don’t look like anything else I’ve seen in modern video games.

The opening sequence, which involves the now standard VR “crash your pod on the alien planet” routine, finds some interesting ways to be tense and unique.

The back half of the game contains some really nice looking cut scenes, with visual splendor that inspires something close to a sense of awe. There are some stunning moments that push Eden Tomorrow out of the “abject disaster” column and into the “near miss” category.

There are scenes where the player takes control of Newton and flies around from his perspective. The actual act of flying is fun, and makes Newton makes a pleasant whirring noise. The sense of freedom in these sequences is a welcome relief after plodding along a the player character.

Eden Tomorrow Starts With A Standard But Workable Storyline

Eden Tomorrow is a science-fiction PS VR game that launched last week. A couple of months ago, a free demo released on the PlayStation Store, and while it was a little clunky, it contained enough interesting story threads that I was interested in playing the full game when it arrived.

In Eden Tomorrow, the player-character crash lands on a barren alien planet. He has taken a bonk on the head, and is unable to remember who or where he is. He isn’t alone, however. Accompanying him is Newton, his chatty robot buddy. Unfortunately, Newton has also taken a bonk on the head, and while he seems to have his basic functionality intact, he has lost most of his memory as well.

Though the player-character is all alone (aside form Newton, of course), lifepods similar to his litter the alien landscape. Many of them still carry their passengers – long dead and in various states of decay.

Terrifying creatures stalk the landscape, many of which will devour a human on sight. Giant dragon creatures, hideous burrowing worm-monsters, beautiful elk-like creatures that carry with them swarms of deadly insects, each of these must be reckoned with as the player moves forward.

As he makes his way through this wreckage of this barren planet (following Newton’s yammering advice), the player-character slowly uncovers the truth of who he is, where he is, and how he has survived when so many have died.

Sounds kinda cool, right? A bit standard, perhaps, but other recent games have taken standard plotlines and elevated them into exciting and fresh gameplay loops. Unfortunately, Eden Tomorrow does not.

Here’s the problem as I see it: Eden Tomorrow has a very cool story, and would have made for a fine two-hour walking simulator. But by repeating the same gameplay elements and puzzles over and over again, this cool little story is stretched into a five-hour marathon that will test the endurance of the most patient sci-fi fans.

In the VR space in particular, it is perfectly acceptable to deliver a two-three hour experience, so long as that experience is interesting and fun. If you have enough material for a two hour game, give me a two hour game. Don’t make me solve the same puzzle fifteen times in an attempt to stretch your game out. Doing so just makes me want to quit.

Here’s an example: At certain points, the player character is blocked from moving forward by an object in the way. Newton the robot can blast the object out of the way, but only if he first charges up his static blaster thingie. This is done by having Newton zip around the environment, finding three blue canisters that are laying around the landscape.

The player must go find a safe zone (a ring on the floor), put up a shield around himself, and transfer his consciousness to Newton. Newton can then fly around, searching for the canisters to charge up. The first time this happens in the game, it’s pretty fun. As I said, the flying is nicely done, though the distance that Newton can fly from the player character varies greatly with little rhyme or reason.

However, this scenario plays out in its entirety no less than six or seven times over the course of Eden Tomorrow. And each time it does, the canisters become more and more difficult to find. Eventually, this game of “find the hidden object” becomes so frustrating that if I were not reviewing the game I would have quit. Further, at one point I became so frustrated that I reloaded the game, and sure enough I found a canister laying on a hillside where one had not been before. If you are putting me through frustrating searches, at the very least don’t glitch the item I am searching for out of existence.

There are four or five gameplay mechanics in Eden Tomorrow that follow the same pattern. They repeat and repeat, becoming slightly more difficult each time. It becomes clear that these mechanics are only present in Eden Tomorrow to slow the player down, and make the game more “gamey”. Sadly, Eden Tomorrow didn’t need it. I would have enjoyed the game so much more if it would have just gotten out of its own way and let me get on with the story.

Other Mechanics Compound The Frustration

There are all sorts of other little frustrations that add up over the playtime. Newton freezes you in place to talk to you, sometimes for minutes at a time. Sometimes he yells at you to “Run! RUN!”, and then keeps you frozen in place for 30 more seconds.

Control is strictly handled on the DualShock 4. Move Controllers are not supported, which is fine, but the decision does limit the interactivity of the game quite a bit. There are no items to pick up and examine, and most of your interaction with the game world consists of clicking the X button.

The creatures (the ones with the really cool designs) behave utterly inconsistently. Sometimes they can kill you in one hit if you get too close, but during other sequences I flew Newton right up to them and bashed into them repeatedly with no reaction whatsoever.

And after explaining to the player exactly what to do the entire game, Newton goes strangely silent towards the end of the game. During the big final confrontation, I flew around aimlessly for ten minutes while the score clanged excitedly away. Eventually I figured out what to do, but I don’t want to have to wander around during a boss fight. It just feels awkward.

There Is A Good Game Hiding In Here

And yet despite all of these complaints, there are the bones of a good game hiding in Eden Tomorrow. In an alternate universe, a version of this game exists that has stripped out 90% of the puzzles and barriers, and simply lets players run through and experience the story. In that universe, people like Eden Tomorrow. But we live in this universe, where Eden Tomorrow is likely to be less-than-loved by the PS VR community.

I was confounded by Eden Tomorrow. It exists in a world of old science fiction, from when minds could still be blown by strange tales, and lost planets. It is a game that I wanted to like, but it seemed to be actively working against my efforts to enjoy it.

It is clear that the development team had a good story to tell, and on some base science fiction level, the game resonated with me. I look forward to seeing what this team develops in the future. But unfortunately, Eden Tomorrow is the game we are examining today. And beyond a few shining moments, Eden Tomorrow just isn’t fun.

While the story in Eden Tomorrow is intriguing, there are simply too many frustrating mechanics to look past. The quality of the narrative is overwhelmed by repetitive puzzles, and a strange combination of completely linear gameplay and an occasional lack of direction. This is a game that would have been much better had the developers given up on the puzzles, and simply told a story.