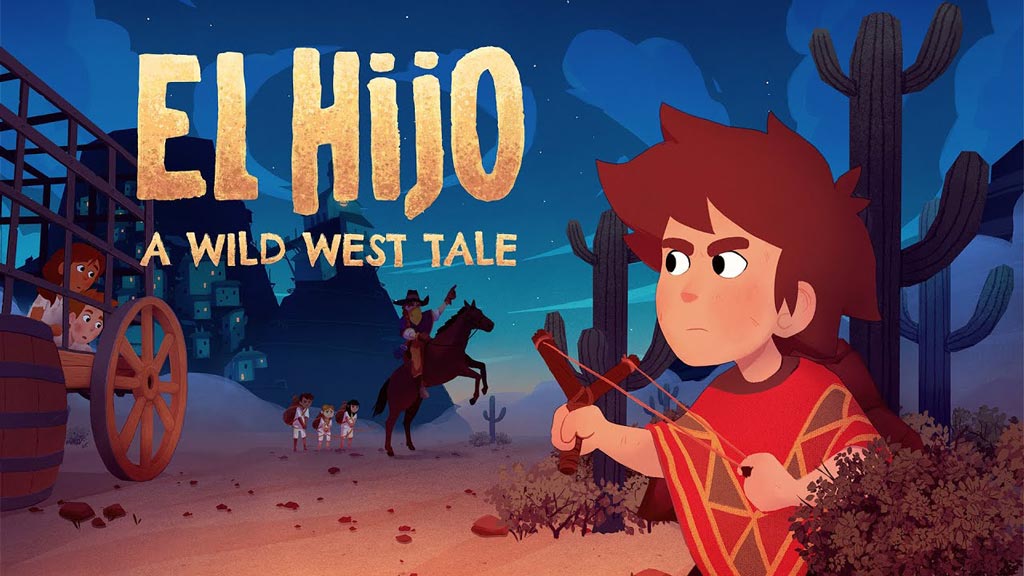 El Hijo – A Wild West Tale PS4 Review Stealth games are something of an acquired taste, particularly for gamers like myself who err towards instant gratification. For the majority of sneak-em-ups, patience is a virtue, as impatience usually signals a rapid demise. But the best stealth games offer up alternative ways to solve the conundrum of how to sneak from point A to point B without being spotted. El Hijo from German developer Honig Studios and publisher HandyGames, generally eschews the multiple choice option and simplifies the gameplay in order to guide players both young and old(er) towards their particular goals.

But in over-simplifying the genre and removing the players’ creative license have they removed the sacred beard from the stealth monk, or correctly tweaked the bandit’s moustache for aerodynamic effect? Read on, mi pequeño chirridos…

After a farmer and her son (El Hijo) escape from bandits who burn their farm to the ground, the mother decides the safest place for her son will be in a nearby monastery. El Hijo quickly decides that he wants to escape the abomination of monks who gently pad around the sun-kissed walls of their collective home. He can then search for and protect his mother from the hostile environment in which they now live under the rule of the marauding bandits.

El Hijo opens with some lovely hand-drawn animated cut scenes which perfectly evoke the scorching heat and arid vistas of classic Spaghetti Westerns, whilst retaining a loveable family-friendly atmosphere. Aside from the cartoon scenes of the bandits’ attrition, the game is refreshingly free of violence, and the slingshots and toys El Hijo finds are only ever used to create diversions in order to sneak to the next area. 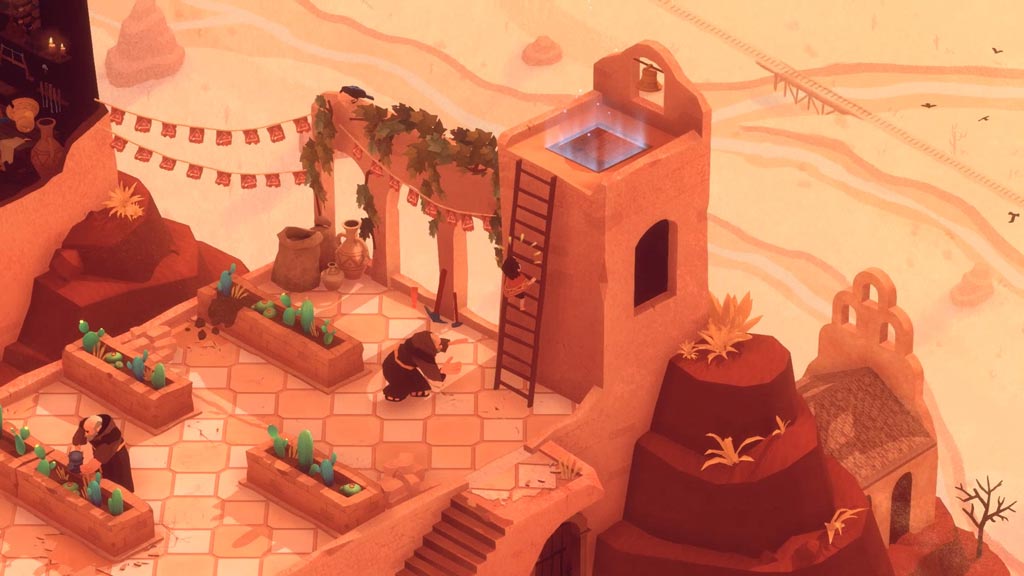 In the opening levels set within the monastery, El Hijo is gently eased into the mechanics of sneaking around the monks. Shadow is your friend throughout, as are giant pots, curtains, laundry baskets, sombreros and coffins which you can jump into or behind to avoid the gaze of the bearded ones. The monks all follow a set predictable path which allows you to weave among them unseen, while the most stubborn ones just need a distraction from your slingshot or a wind-up toy in order to entice them away from their path.

Should they spot you, they quickly chase you down and you are collared and transported back to the last checkpoint. Fortunately there are many of these scattered amongst the levels, so there isn’t too much work needed to get back to where you are trying to sneak. Evasion is also possible if you are quick enough to jump into a nearby receptacle where you can wait while your confused foe questioningly looks around while you hide right under their nose. 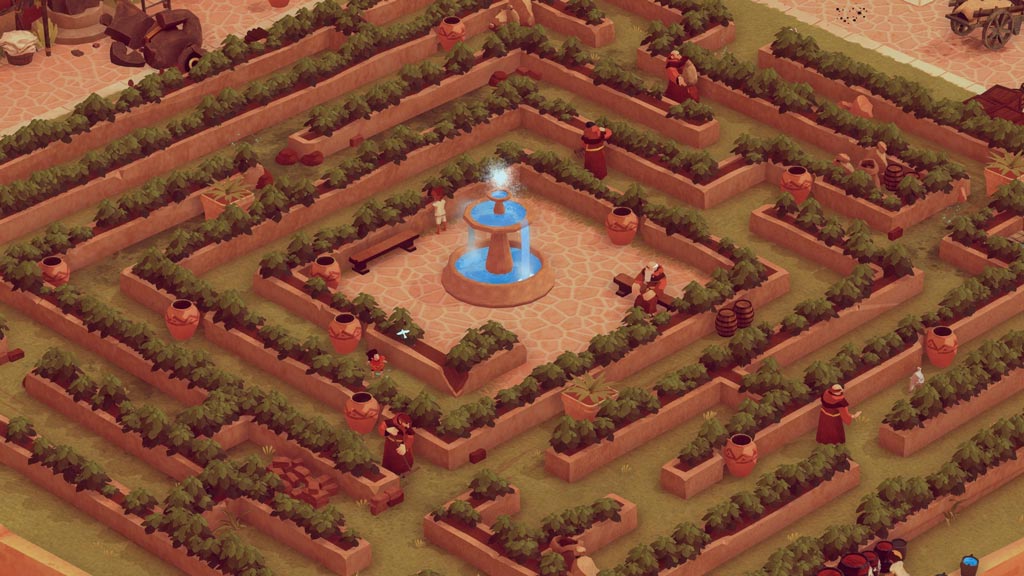 The Good, The Bad And The Monks

The levels are designed around an isometric viewpoint and fortunately the developers have ensured that nothing much is obscured by the scenery, even with multiple levels which you explore with ladders and steps hewn into the rock. Moveable objects such as boxes and ladders add puzzles to the main stealth gameplay, with certain areas only accessible through the judicious movement of these items.

Each level has the optional task of ‘inspiring’ the other captive children who are working in the monastery, rail-road or frontier town. When you find another child, El Hijo briefly speaks to them and shows them an entertaining trick or diversion which inspires them to think freely for at least a short while. Often the children are slightly off the beaten path, so its worth exploring every inch of each map in order to get the full gamut of trophies available.

Pressing R1 zooms back to give you a doves-eye view of the play area and also highlights the sight lines of the enemy so you can plan and successfully evade them. It also shows the exquisite level of detail and thought which has gone into the level designs, and the individual animations and actions taken by the other characters. 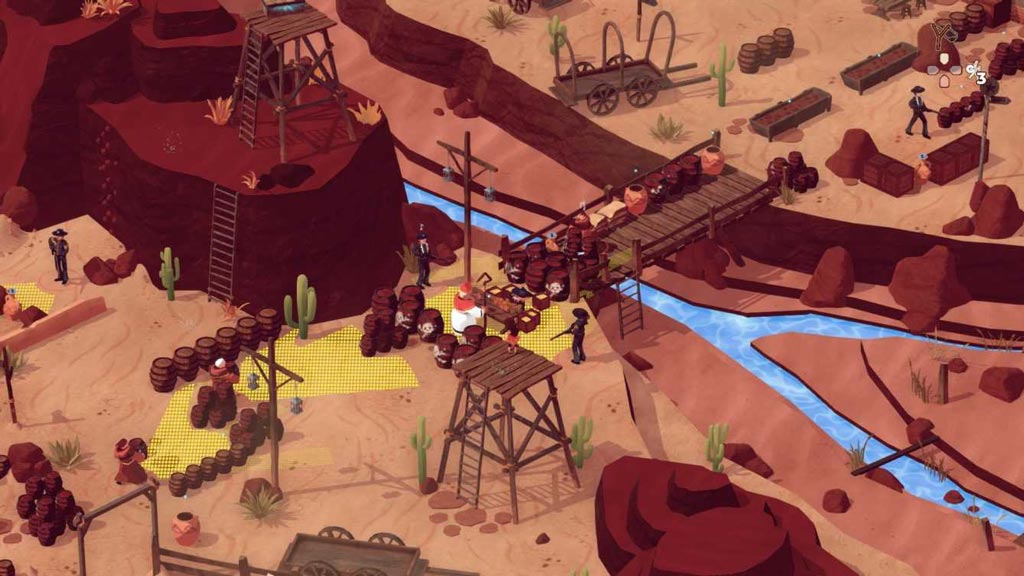 For A Few Dollars More

The art design is consistently charming and manages to cram in a lot of endearing detail for a game developed on a budget, with a warm bright veneer to cheer those playing the game in a less than mild climate. Sound design is supremely subtle but does the job in a jovial fashion, particularly the grunts, whistling and sounds from the NPCs. A bit of Ennio Morricone-inspired music wouldn’t have gone amiss, but the rousing atmospheric music does just fine.

So how does El Hijo play? The controls for moving around are simple and intuitive, with a press of square to crouch near a wall, and R2 to prepare a distraction and the left stick to aim. There’s no jump so sometimes the logic of not being able to hurdle a low wall sometimes forces you to walk a long way in order to reach an area right next to you which can be a mite frustrating.

The AI of the NPCs sometimes borders on the dim-witted, but at least it errs on the forgiving rather than a frustrating level of intuition, allowing you to occasionally sneak past under their noses when by rights, they should have sensed you. The pre-programmed movement of the foes isn’t a problem, as it gives the game a cosy predictability which saves on frustration and makes it more friendly for younger players. 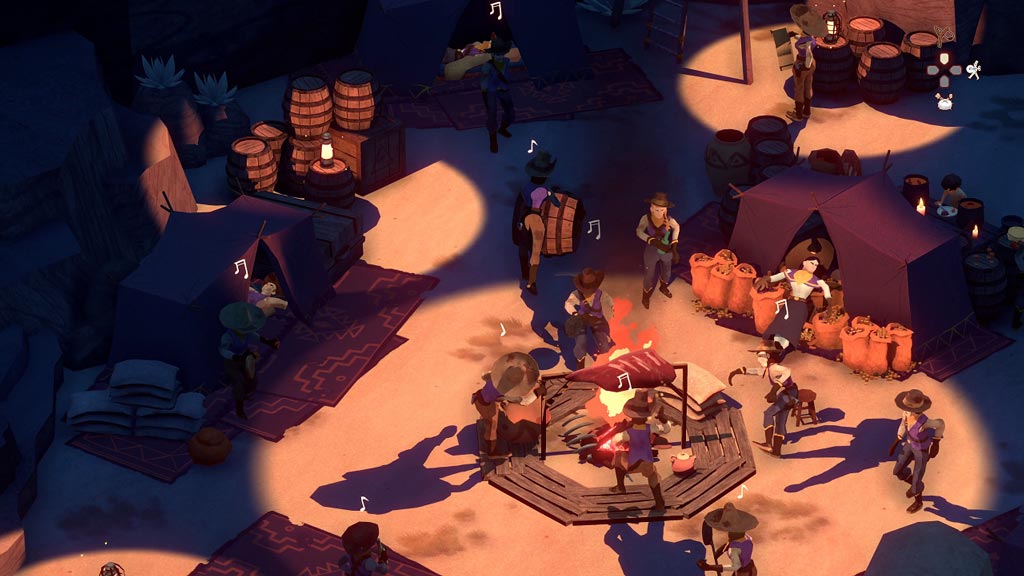 The difficulty level is the main issue which I encountered – often a level which offers up a reasonable challenge suddenly ramps up the difficulty at a certain point. This means you’ll be stopped in your tracks until you can navigate a tricky situation which seems unreasonably unfair and will certainly try the patience of players who aren’t used to such trials.

Likewise, some of the puzzle maps require an inordinate amount of backtracking in order to progress just a few steps and again, the flow of the game was as disturbed as my patience on several occasions. Perseverance will always win the day, but I can imagine the game being switched off never to return unless an adult stepped in to attempt the long-winded brain teaser to move onto the next level.

Other than those fairly significant niggles, El Hijo is a charming and original take on the stealth genre in a seldom used Western scenario which is brimming with detail and atmosphere. There are around 6-7 hours of gameplay here, with more for completists who don’t mind replaying the levels in order to hunt down those bored children who need enlightening with a touch of juggling or some pranks with the cowboys.

Give this dusty trip into the Wild West a go if you fancy a sneak around a nicely designed and authentic game world, with a touching and engaging storyline which gently deals with understated heroism, revenge and even child labour in your quest for justice.

El Hijo – A Wild West Tale is out now on PS4

A charming, gentle take on the Wild West and stealth genres aimed at all ages, but with occasional spikes in difficulty which may trouble younger players. The art design and narrative are both captivating, so providing you have the patience for stealth and puzzles, it's highly recommended.