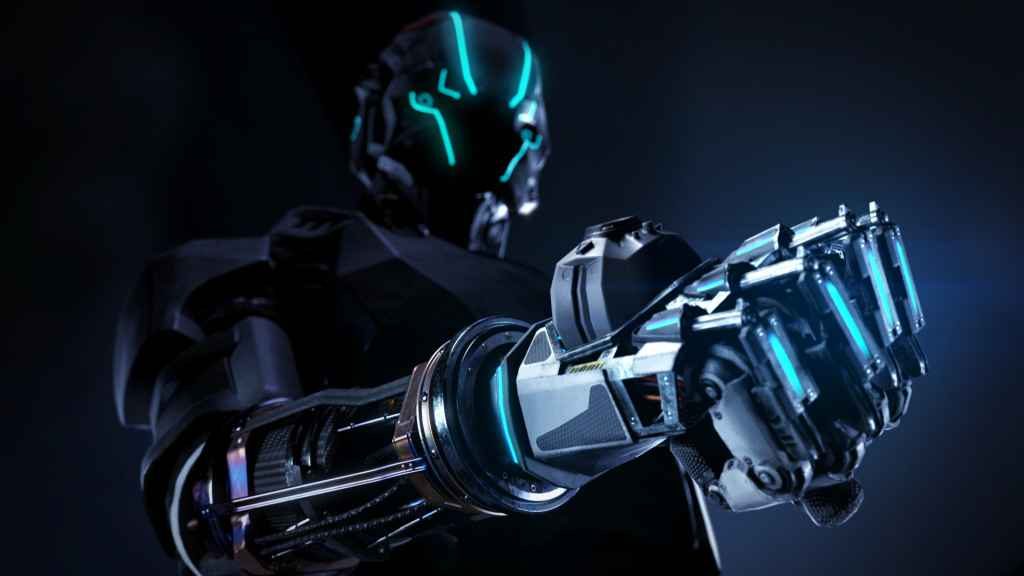 I’m standing in a hallway in the second level of Espire 1: VR Operative. So far, things have been going okay. The graphics are a little fuzzy, and there is a lot of texture pop-in going on, but the level design is pretty enjoyable, and I’m having a good time plugging the dummy AI guards with my sleep darts.

I have just taken control of a new Espire – the awesomely designed robotic marionettes that I’m controlling remotely via VR (super meta, but a cool concept). This alternate model robot has a newly available power. I am told that I will be able to engage “Espire Vision”, which will alert me to nearby threats.

“Operative, Put Your Hand To Your Head And Pull The Trigger”

“You’ve made it past the lasers!” the voice bursts to life. “Be on the lookout for more!”

Wondering how I made it past the lasers (but pleased by my brilliance), I start slowly forward again.

“More lasers, operative! Put your hand next to your head and pull the trigger!”

Figuring that I cleared the lasers the first time with no difficulty, I continue forward. I can see nothing in my way. Suddenly, electricity sprays across my view screen, and I find myself looking at a “Try Again” menu. “Operative, you must avoid the lasers. Put your hand to your head and pull the trigger,” the voice says.

What the hell? I gamely re-up, determined to figure out what I’m doing wrong.

I go through the same set of actions, identical to my first run down this corridor. When I get to the point where I got fried by the lasers, I see the dead husk of my previous Espire slumped over against the wall. I put my hand to my head and pull the trigger. Nothing happens. Seeing no other choice, I continue forward. I am again fried by the lasers.

I find myself back at the menu. Someone is moaning “It’s all over. It’s all over…”, and I’m told that I must start the level again. Seeing as how I only made it about 40 feet into the level, this doesn’t seem like a great loss, but I’m frustrated.

I pull off my PSVR and grab my laptop. I google “Espire 1 Hand Head Trigger Not Working”, and I find this lonely, solitary post on Reddit from SeniorCreamPuff: “I was playing Aspire 1 (sp) and I got to the point where it said to put your hand to your head and pull the trigger to activate scanning, forgot the exact name, but I tried many things and it never seemed to work.”

In response, DeliciousAuthor says, “Hold your hand to your head and press triangle on left move or square on right move.”

I’m sorry. What? WHAT? Who is DeliciousAuthor? How does he know this? Why don’t I know this? Why is Espire 1 clowning on me? Rage. Boiling blood. Terrible anger. Also, I need to use the restroom.

Did Espire 1: VR Operative not just tell me maybe 30 times to put my hand to my head and pull the trigger? Did it not just show me a holographic image of my character performing this very action? Did I not just submit myself to great amounts of static electricity?

Do I play videogames to be trolled by handlers speaking through headsets telling me to do the wrong stuff just so I can get killed repeatedly because this game doesn’t have the simple courtesy not to lie to me about how the controls work? As a gamer with a backlog a mile deep during the busy holiday season, do I have time for this shit?

Espire 1 has been patched twice since release. Am I expected to believe that they couldn’t patch out this endlessly repeated line of dialog so players could simply progress down an empty hallway? Heck, they wouldn’t even need to change the hologram. Just switch the line of dialog. I wouldn’t even mind if they muted the dialog and splayed “Our bad, we meant to say press the Triangle button” across the display in 90-point Calibri.

Before this issue, I found the controls of Espire 1 to be a bit clunky, but ultimately usable. You move forward by pressing the Move buttons on the controllers, and turn with the face buttons. Initially, the turn radius was very small, requiring a lot of button presses, but the ability to increase that (and switch to smooth turning) has been patched in.

There are all sorts of other cool ideas in Espire 1. I love the hand cameras that you can use to peek around corners. And as I mentioned above, I was having a fairly decent time traversing Espire 1’s well-designed levels, sneaking through air vents and dropping down on dudes from above. The setting and story felt standard, but serviceable. And while I found Espire 1’s version of stealth gameplay to be pretty easy (due to the unde-rbaked AI), it was shaking out to be a breezy but enjoyable game.

But this deal with the hand, the head, and the lasers made me actually laugh out loud at the idea of continuing further in this game. Then, of course, I did continue on, but only out of a sense of obligation. If I hadn’t been reviewing the game, I would have been done. After this level two craziness my experience with Espire 1 felt tainted somehow, and all I could see were the buggy guards running in circles and the textures loading in after I had already crept past objects.

The AI for enemies is rough – particularly for a stealth game. Sometimes it seems like enemies shouldn’t be able to see me, and they shoot me anyhow. On one occasion, a dude continuously shot me through an air vent grate while the guy next to him stood prone and confused. Other times, guys have a clear line of sight to me, and they act as though they are blindfolded. I was ignoring the issue before I had problems, as I was having a good time shooting fish in a barrel. But afterwards, it just seemed like another indication that Espire 1: VR Operative is not ready for release.

Digging Online For Controls Is Not Standard Procedure For Reviews

I understand that Espire 1 was developed by a small team, and I truly admire their ambitions in bringing a VR game to market on so many platforms simultaneously. But if a game actively instructs me falsely, we have a problem that I’m not willing to work through.

I even went so far as to dig into the game’s forums to see if publisher Tripwire Games alerts players there as to the change in control scheme. Nope. Not a peep. It should be noted that this is well above and beyond what I would normally do for a game, but this game has so many cool ideas that I was grasping at straws for ways to forgive it.

The ultimate question that I ask myself is this: if I were a consumer and I purchased this game, would I be happy if I had purchased this game? In this case, the answer is a resounding “no”. I would be (and am) angry at Espire 1 for wasting my time.

Espire 1 will eventually be patched more, and I’m sure that in time the game will reach a state where it is smoothly playable. But until that time, players should avoid spending hard earned holiday dollars on a game that is actively broken.

Several weeks after release (and several patches deep) Espire 1: VR Operative is ultimately an unfinished game. I have no problem with Early Access titles on PC, but by the time a game hits the PlayStation Store, my expectations are that it is in a playable state. After two patches, Espire 1: VR Operative still feels largely unpolished (and at times, actively broken). Proceed with caution.