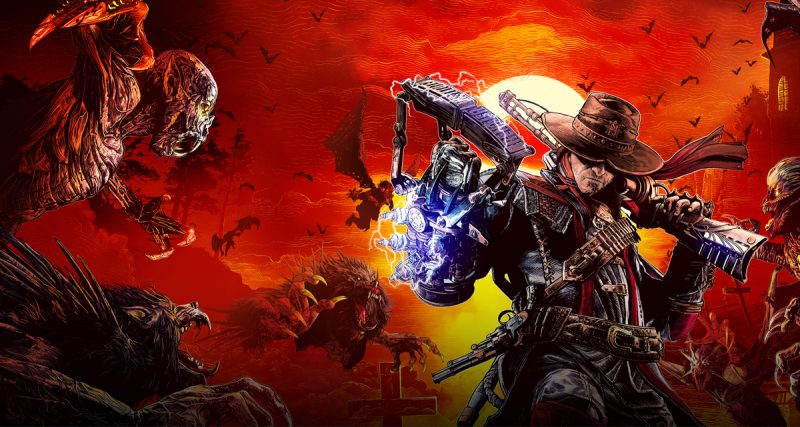 Evil West PS5 Review – Flying Wild Hogs has taken a familiar concept in vampires and combined it with a lesser-used setting of the old west to deliver a damn fun action game filled with cowboys, underground tombs, creepy swamps and deserted towns. Evil West is a pure action game that took me back to when games didn’t need to be cinematic adventures. Instead, they were just fun and easy to pick up and play.

A Story That Trends On Familiar Ground

Evil West tells the story of Jesse Rentier: a vampire hunter working under his father and the Rentier institute. The institute is established to deal with the vampire menace and keep the country safe from these evil creatures. The story starts with Jesse and his partner Edgar derailing a train transporting vampires. Their goal is to capture a higher vampire so that he can lead them to an Elder Vampire nesting in the region.

After completing their task and taking out the Elder vampire, the vampire’s daughter sets out for revenge and attacks the Rentier institute in a surprise attack. What follows is a story of revenge that’s full of ass-kicking antics; It’s a story we’ve experienced in plenty of other media, sure, but Evil West tries its hardest to make me care for its characters. 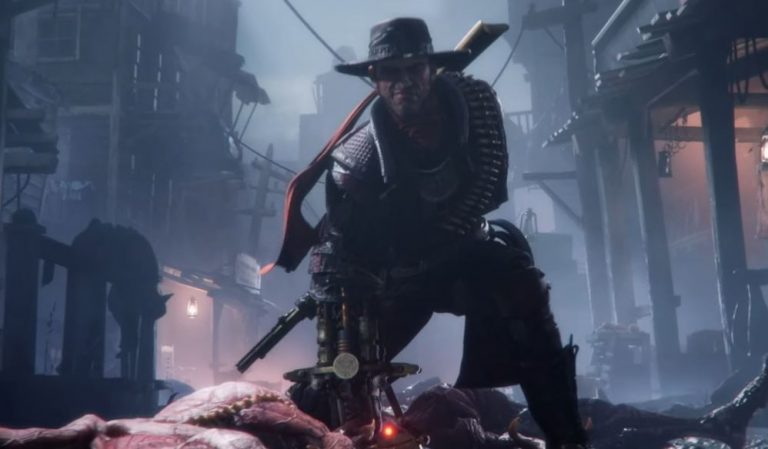 Having said that, I would have cared a lot more about them if they gave me a reason to. The majority of the cast is one-dimensional and selfish, but in a roundabout way it works for Evil West because it’s not supposed to be taken too seriously. It’s meant to be fun, and anyone who’s played a Flying Wild Hogs game will know they are in it for the high-octane action over storytelling.

Punching Through Vampires Has Never Been This Fun

Gameplay is the heart and soul of Evil West. Combat is where it shines, with plenty of weapons and mechanics to tie you over but nothing complicated that may turn players off. Most encounters take place in an arena-like structure. You’ll always know when an encounter is about to occur just by looking at the location – it’s filled with TNT crates and spike traps.

At first, you would have thought Evil West would rely on its long-range weapons, but it’s more of a melee combat game. Your gauntlet is your primary damage-dealer and what you’ll use to execute your enemies and dish out the most damage.

You have your standard combo along with unique attacks like uppercutting an enemy and then shooting them with your revolver to juggle them in the air or jump up and superman punch them into other enemies or obstacles like spike traps and TNT crates.

Later you gain access to an electrified gauntlet that allows you to drag enemies to you, like Mortal Kombat’s Scorpion and dash toward your enemy. On the weaker foes doing these techniques will electrify them, which is demonstrated by a somewhat comedic X-Ray skeleton of your enemy. This leaves them stunned, allowing you to beat them with rapid-fire punches.

You Get Plenty Of Firearms To Aid You Throughout Your Adventure

The gauntlet isn’t your only tool of destruction. Jesse is armed with his trusty revolver and later acquires a rifle, flamethrower, and sticks of dynamite to help him deal with the vampires. These weapons vary in their uses, but not all are meant to be your primary weapon of choice. The revolver is great and chipping away at enemy help, while the rifle is a crucial weapon to target enemy weak points. 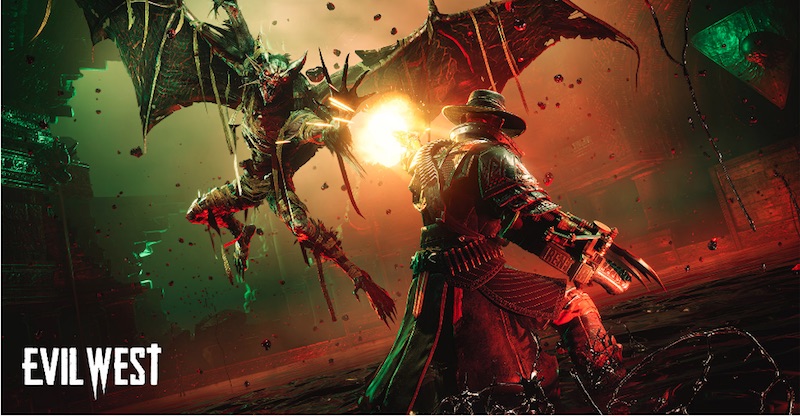 Evil West does a great job of managing how you use each weapon and how long until those cooldowns are up, so as not to give you too much of an unfair advantage. Sometimes I wish they would however because the enemy combinations can get hectic in the second half.

Every Upgradable Skill And Weapon Provides Huge Advantages In Combat

Upgrades play a crucial role in Evil West and can drastically change how you use your weapons. As you level up, you’ll unlock perks that unlock new abilities for your gauntlet. These vary from being able to slam your gauntlet into the ground creating an area of effect attack, to grabbing airborne enemies with your tether and slamming them into the ground creating an explosion of electricity.

Weapons, on the other, can only be upgraded with money that you find throughout each mission, which also counts as collectables. Though you still have to level up to unlock some skills for weapons, you can also unlock skills by finding special equipment chests that unlock unique abilities for your guns and even your gauntlets. 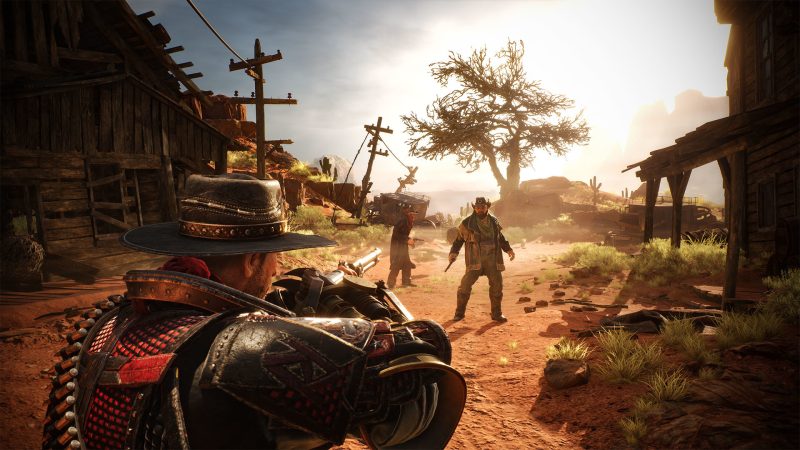 If you have the money, buying weapon upgrades can add electrical abilities to your weapons. The revolver can get an upgrade that changes each round to electric bullets that bounce off enemies and the environment to hit multiple enemies.

Some Unfair Encounters Will Have You Cursing Out Your TV

Evil West features a variety of enemies that require different tactics to take down. Some enemies appear with shields you must destroy while others launch explosive leaches at you from a distance. As I mentioned earlier, in the second half of the game, you’re put into situations that are just unfair and extremely difficult, requiring you to use all the tools at your disposal.

The problematic parts come from enemies that were bosses appearing as regular enemies, sometimes in a combination. Even bosses that you only fought in the previous level rock up for a second time to ruin your day. Furthermore, many of these foes aren’t even made weaker than normal enemies and require just as much time and effort to defeat a group of other enemies as they did when they appeared on their own. 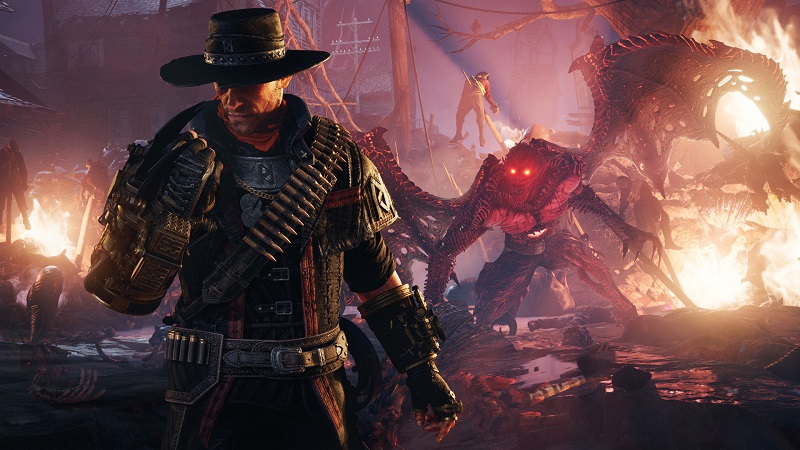 Evil West is a linear adventure that utilizes a mission-based level selection. You’ll go from mission to mission to complete your objective through various locations. Jesse explores large oil fields, swamps, snowy peaks, and towns whose residents have been killed by vampires. Each location has plenty of collectables to find, from gold, special equipment chests, and lore documents to expand on the world-building of Evil West.

Many of these are found off the beaten path and encourage exploration, especially for gold, as it’s used to upgrade your weapons. The locations feature plenty of traversals indicated by bright glowing chains showing you what you can interact with. One bad thing I found with exploration is that there isn’t any backtracking. After you reach a certain point in a location, you can’t go back in case you missed a collectable.

This is highly bothersome because there isn’t anything in the way. You jumped over a crate to move forward, but you can’t jump back over the same crate to go back? It’s a baffling decision. 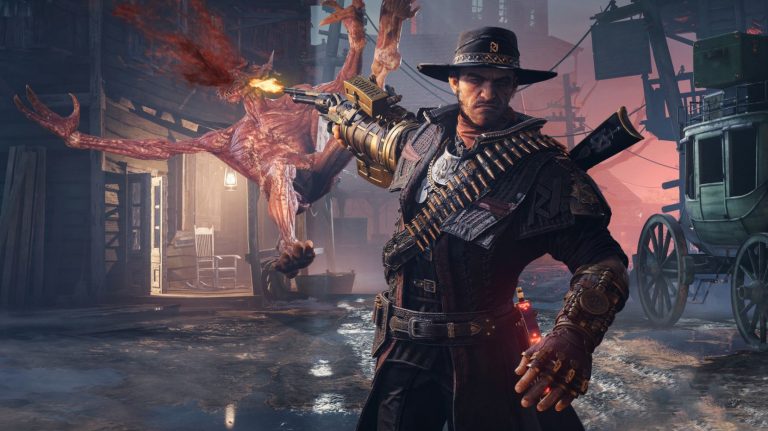 Though I enjoyed the various locations, they also didn’t make much sense in where these locations are and if any significant portion of time has passed between missions. Why am I exploring desert canyons, and then on the next mission, I’m on top of a snow peak with a blizzard blowing? I wish the game would do a better job of portraying how much time passes in the story.

I didn’t mind those varied locations by any means, and it was nice to keep things fresh. I just wish there were better reasoning for going through all four seasons in four missions.

Visually, Evil West suffers from some weird lighting. The game is either too bright or too dark. I constantly adjusted my picture mode on my TV just to see what was in front of me. Dark locations are essentially black, and hard to make anything out. That’s not to say there isn’t some incredible scenery to check out, but my favorite locations featured the dark and gritty world that the vampires dwell.

These dark and gloomy locations featured great architecture, and some of the later missions were gruesome as you saw the aftermath of an entire farming town completely beseeched by vampires. The way the moonlight shone down on the town and the fires’ illumination was a terrifying sight. 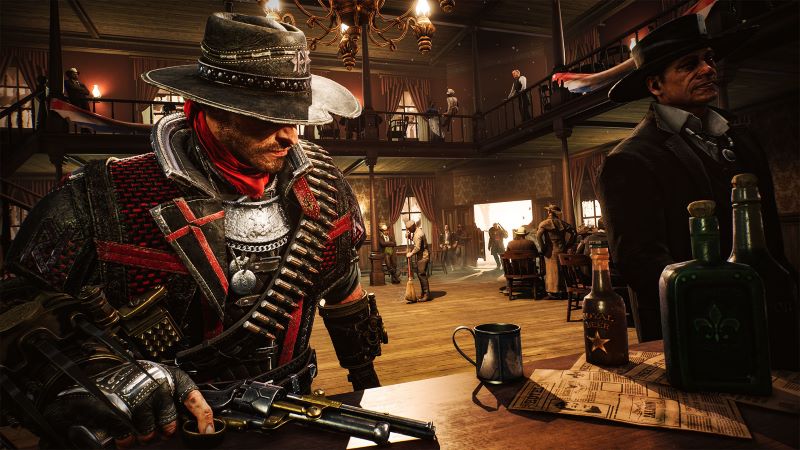 Meanwhile, voice work could be better. Most characters speak in a very excogitated tone, and one character, in particular, is constantly flinging profanities at everyone around him. My biggest issue is that nobody sounded like they were from the old west.

The soundtrack, on the other, sets the mood of each mission perfectly and ramps up when combat begins. The tavern where your home base is located even has that piano music you hear in western movies.

Evil West is an entertaining pure action game that reminds me of games that didn’t need to be extensive cinematic experiences. It’s designed to provide quick and fun action-packed moments. I wish the story held a little more oomph, and visually, I found myself constantly adjusting my tv’s settings so that I could see where I was going due to its use of lighting.

Even with its problems, Evil West provides a solid combat system and fun exploration with plenty of abilities to unlock, weapons to try out, and vampires to slay. It’s a pure action game that everyone looking for something simple and fun to jump into will genuinely enjoy.

Sometimes you want to start a game and have fun right from the get-go. Evil West doesn't try to do anything fancy or tell a big cinematic story. Instead, it gives you various tools to go in, and slaughter vampires like humanity's existence depend on it. With plenty of weapons and fun combat, Evil West provides plenty of non-stop action, although it's let down by a paper-thin story and some issues with visuals and lighting.