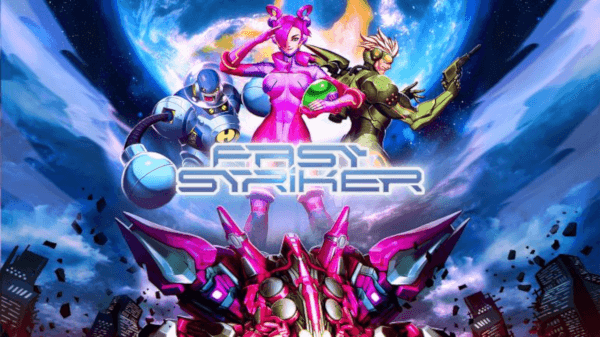 Fast Striker makes its modern-day appearance long after its appearances on the Dreamcast and Neo Geo eight years ago. What makes it interesting in a modern light is that it has a level of challenge that most modern games lack. Frustration comes with this as well, but that’s not frustration you would get from a good challenge.

Fast Striker is a basic shooter, all in all, with few bells and whistles to go with it. Two of its most notable features are that the controls can be remapped and it is Cross-Buy for $9.99 with two separate Trophy sets. These are not easy lists, necessarily, but there are two of them.

Visually, the game lacks a great deal. It harbors that retro look, but it is the kind of retro look you would get if you hooked up an old composite-based console into a 4K TV : It is far from optimal. Fast Striker is colorful, but the game is also visually uninspired. Simply put, Fast Striker is a direct re-release of the older version with very little enhancement. Even in a modern setting, retro can still look sharp if optimized, but that is not the case here. Objects are clear and defined, to be sure, but they lack much else. Some of the obstacles in this game offer little wiggle room. Memorization and practice are big parts of games like this, of course. However, I found myself having to avoid many indestructible objects, starting at level three. Some are static and some move around, some even disappearing off the screen just to come back in from the bottom. Then some lasers are borderline traps.

On one particular level, lasers block your path, disappearing and reappearing at fixed time frames. What frustrated me here is how much time the laser is present. For over a third of the screen, the lasers fire a steady shot. If you are not above them before a certain point, you are trapped.

This gripe is not about mistake forgiveness. This is about having to juggle all the other things flying around on screen and having to compensate for something like this. You have to go deep into the fire sometimes to stay alive. This is part of the game, of course, but there is a sense of fairness that this particular level lacks. Plus, it’s not even the last one!

One intriguing caveat is difficulty

One aspect to the game has me on the fence. The way each difficulty is different has a uniqueness to it that I cannot get over. Instead of having a bunch of ships, Fast Striker has a ship designated to each difficulty, and each ship has different types of weaponry. This adds different elements that a choice in ships would not have. The Novice ship has a firing spray when holding the fire button and a linear shot when pressing it. Most of the game requires having to differentiate between these two firing modes based on the present situation.

This, I like. What I do not like is how both firing options are on one button. This is easier to play, I suppose. At the same time, the three buttons needed to play the game are remappable. This might have been the standard in the original game, but this could have been another opportunity to optimize what Fast Striker already had. If you have a Vita…

One important aspect to Fast Striker is that the experience is the exact same on both PS4 and Vita. This is to be expected, since the original game released on Neo Geo. Still, the Vita screen door not hinder gameplay in the least. In fact, considering portability, the Vita makes for a better home for this shooter.

Fast Striker is exactly how it was back then

With very little else outside of the six stages and five difficulties, Fast Striker is simply a re-release of an old game with little to no modernization taken to heart. The game itself is fine, but ironing out some old issues would have made for a more intriguing product. Fast Striker targets a specific audience rather than coaxes newcomers with a good time.

Fast Striker pays homage to the original game, but it offers very little in regards to modernization. Fast Striker has some simple, intriguing elements to it, but it lacks the polish of other games in the genre.