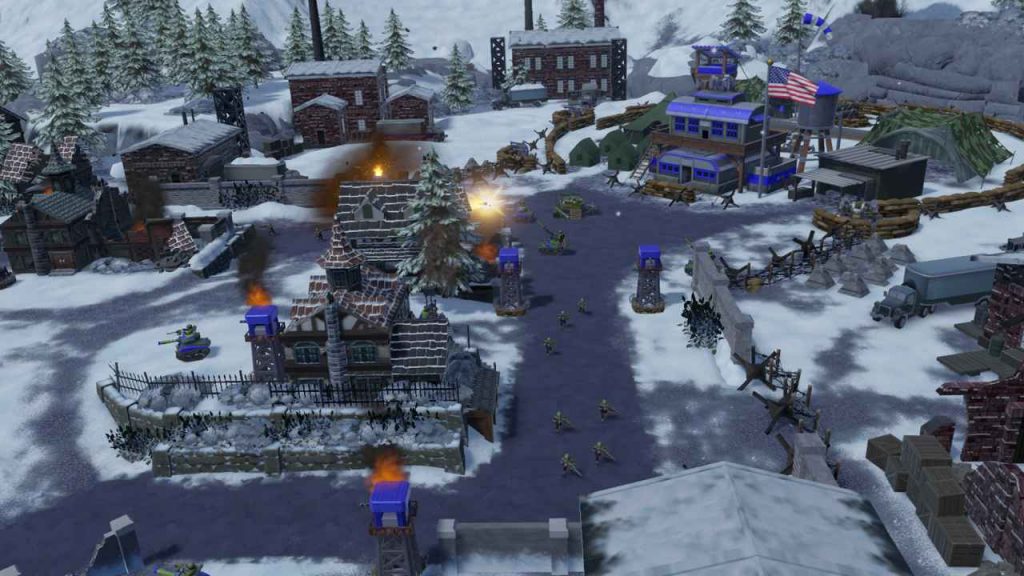 I clearly had this battle in the bag. The enemy had sent out a few too many planes for my liking, and they were bombing and strafing my soldiers all over the map. Rather than reinforce my artillery, I completely pivoted to the skies, creating a mammoth armada of planes and sending them to clean up these upstarts.

When it was all over, I had twelve planes of various types, looping and patrolling every corner of the shattered countryside I was battling for. The skies attended to, I refocused on my ground game, and launched a new wave of tanks at the enemy. But then things shifted again. Final Assault had tricked me once more.

The enemy, after sitting quietly and watching my slow march to his base, suddenly deployed – hell, I don’t even know what it was, but it was awful. Suddenly, my planes were exploding in the sky like so many fireworks. In less than a minute, my entire air force – and all of the resources I poured into building it – were gone.

A thin line of heavy artillery, tanks, and troop carriers came rolling out from my enemy’s base, and suddenly I was rocked back on my heels, defending my resources where just moments ago I was assured victory. I swore bitterly to my empty living room, though there was no one to hear. It was 1:00 AM, and I was going to be awake until I not only won this battle, but the entire war.

Battles in Final Assault are fought on amazing diorama-style World War II-themed maps. Tiny dollhouse-like blown-out buildings dot the landscape. Depending on which map you are playing, forests, farmland, factories, or mountains surround the field of battle. Each player has a base on one side of the killing field, with several lanes connecting the bases across a no man’s land.

Real Time Strategy (RTS) resource collecting elements have been almost completely stripped out Final Assault. Each player has a cash counter, slowly ticking up and dropping cash into your coffers. Various vehicles and equipment cost a certain amount of cash, so there is a constant push and pull between deploying flurries of cheaper, weaker units or going all in on some barn-buster units at the expense of numbers.

Units are deployed in a number of ways. You can drop units right onto one of the lanes like a military god if you want them to follow a set path. But nothing forces you to follow the lanes into battle – it is perfectly viable to build up a small army in the trees and bring them smashing down on your enemy. These are sizable maps. With three lanes of conflict, several battles raging outside of the lanes, and airplanes buzzing all around your head, it is easy to lose track of it all.

The controls on Final Assault took me a few minutes to get used to, but once I got it, I realized that these controls are some of the best I’ve encountered in a VR game. Both of the Move Controllers have the same control scheme, allowing you to alternate at will which hand is doing what.

Using the thumb button to anchor your hand wherever it currently resides, you can push and pull your viewpoint to any point on the map in a matter of seconds. You can drag your face right down to the field of battle to look at how your little dudes are doing, or swoop out to a birds-eye view. Though there are buttons to rotate the battlefield, I never used them. I always preferred to keep myself facing the same direction, to prevent myself from becoming disoriented.

You can click the Triangle button to bring up your menu of units. I pretty much keep the menu up at all times on my off-hand, using my dominant hand to drag myself around and select units. All units initially launch from your base, but selecting their destination is as easy as pointing at where you want them to go. Once a unit is on the battlefield, it is easily directed by selecting and dragging a path for it to follow, or selecting an opponent for it to attack.

This control scheme is so intuitive, it soon becomes second nature. I stopped thinking about the controls as soon as I became accustomed to them and was never forced to wrestle with them again. For a VR game, this is a titanic achievement.

A Ton Of Game Structure Bolsters The Base

Beyond the battles that make up the meat of the game, Final Assault boasts a huge number of bells and whistles that flesh out the experience and make it feel like a full game.

The campaign mode, for example, nestles individual battles within an over-arching hex-style strategy board game. Nothing too difficult or complicated, but it does add an additional layer to Final Assault. As opposed to plunging the player from battle to battle with just a cut scene, this table-top system gives context to the battles and adds an additional strategic element to the proceedings.

Single player also offers a few skirmish modes – different scenarios on this hex board for the player to attempt to overcome. And three difficulty levels ensure that you will have reasons to revisit some of this stuff after blowing through it the first time.

Final Assault also provides the player with eight different playable generals (four American and four German) to choose from – each of which have their own unique bonuses and unit specialties. Each commander can be individually customized as well, with the player earning a number of paint jobs and other cosmetics as the game progresses.

I absolutely adored my time with Final Assault. This game is going to be installed on my PS4 for a long time. I use PSVR as a way to visit with my son on the other side of the country, and Final Assault has just rocketed to the top of our play list. It is frankly the most fun I have ever had with a VR game.

In fact, the only thing that keeps this score from being a solid 10 right out of the gate is the fact that matchmaking seems to be broken upon release. You can enter a “Search for Match” state, but before long Final Assault will inform the player that their internet has been lost (it hasn’t). The only way to reset this issue is to crash the game and reboot it. So taking on random opponents is off the table for now.

Establishing a private match is still viable if you know someone else with the game. My son and I spent some hours on Sunday morning in a bitter standoff, burning through units like lunatic WW1 generals. It seems that playing against a real opponent (especially one that knows you well) can be a lot more challenging than anything the Veteran level AI throws at you.

Final Assault might be the best multiplayer game available on PSVR right now, and that’s saying a lot. Playing with another person is like taking a time machine back to childhood, when I would make forts out of sticks in the dirt for my army men. I just cannot state how delighted and excited I am by this game. My heart actually starts beating faster just sitting here thinking about how much I love it.

Everything about Final Assault hits. The sound design, the strategies, the amazing little vehicles fighting their loud little wars. I know that the development team at Phaser Lock Interactive struggled to get this game up and running on base PS4s, and their efforts were a smashing success.

This does not feel like a stripped down game. Final Assault feels robust and fully developed. Final Assault is a must-buy for fans of VR multiplayer, strategy geeks, and people that get enthusiastic over damn good games in general. Grab this one. You won’t regret it.

Final Assault is now available on the PlayStation Store.

Final Assault combines stripped-down RTS battle strategy with an amazing miniature representation of World War II, feeling for all the world like a game of army men come-to-life. With tons of options, game modes, and unlockable cosmetics, Final Assault feels like robust console game – and the visuals are undeniably cool. I cannot overstate how much fun I’m having with this game.