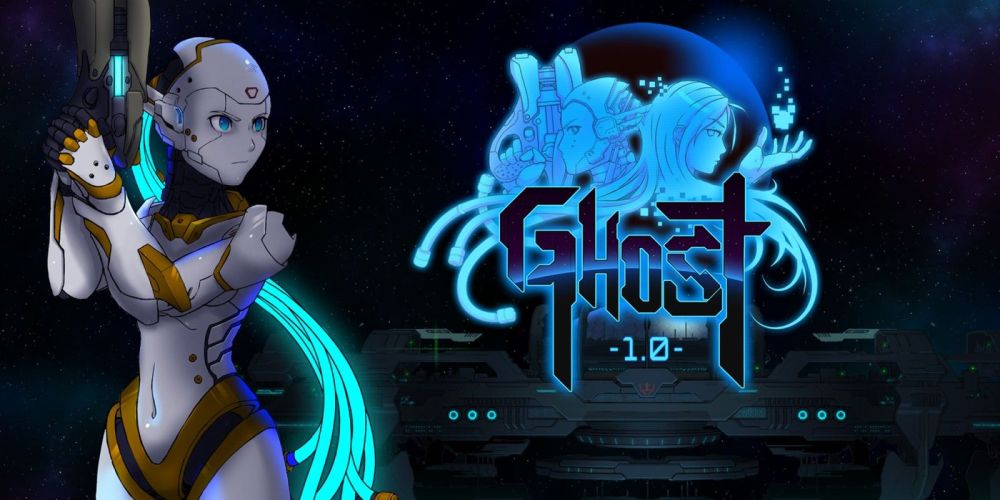 Indie games have such a compelling appeal. Major games garner attention from everyone and sharing them with others just consists of talking about the same things. Indie games, however, lie just under the radar. They allow you to share something brand new with your friends and associates in a way you can’t with mainstream content. Such is the case for me with Ghost 1.0. Ghost released on Steam in 2016 to modest success. I’ve had my eye on it since then, wishing and hoping for it to land on the PlayStation brand of consoles. It’s finally here, and I’m excited to tell you all about it.

You are Ghost, assigned to infiltrate the corporate space station, Nakamura. You are alone as you explore this Metroidvania station, with the help of Jacker and Boogan on the other end of your radio.

Ghost 1.0, outside of being a very accessible Metroidvania title, is both a homage and a commentary to a multitude of different subjects. It takes light jabs at the cliches and bad habits in the gaming industry. Even the philosophies around AI and individuality come up from time to time. Ghost references many aspects of pop and gaming culture. Metal Gear is a fairly common reference, which I just eat up. An obvious one is Ghost In The Shell, because, well, she is a ghost in a robotic shell.

Take this and couple it with quirky, thoughtful writing, and you’re in for a good time at all times; that’s before we even talk about the gameplay. Every once in a while, the writing falls a bit flat, where a joke just doesn’t hit the way it should or a reference is a bit too deliberate for its own good. Most of the time though, the dialogue and writing are on-point.

In terms of gameplay, Ghost 1.0 is both simple and complicated. It’s simple because most of the time you search the space station completing different objectives by jumping around, shooting enemies, and solving the occasional easy puzzle.

The game grows more complicated as you encounter bigger bosses. At the same time, you gain skill points and Energy Cubes to add skills and buy traits. The best way to collect Energy Cubes is to trigger alarms. Some are avoidable while the rest are mandatory for progression in some form or another. When tripped, waves of enemies come at you. You must survive in order for Jacker to hack the system, halt the alarm, and open the doors. You technically don’t have to kill every wave to progress, but the Cubes you earn for doing so are well worth the effort.

Not all alarms are created equal either. The challenge adjusts as you continue on, increasing the longer you play. On harder difficulties, especially in Survival Mode, these scale up automatically. Be ready for anything if you plan to start in Survival Mode.

Skill points contribute to a tree of different skills for the entire team and they don’t just apply to Ghost. Putting points into Jacker adds opportunities to hack enemies for your benefit, generally during alarm sequences. Points in the Robot add strength and enforcement to the chassis itself, while adding points to the Ghost form allows for you to move quicker or affect robots around you.

Traits are sold by vendors throughout the station, and no one vendor sells the same items. Some focus on one-time-use consumables that heal or buff temporarily while other vendors sell permanent boosts to stats or even remote turrets that fly alongside you.

These skills and traits allow you to better navigate the space station, even on harder difficulties. In more challenging engagements, you still have to be on your toes, but with some extra leveling, you’ll be right as rain in an attempt or two. Tutorials explain the basics, but it’s up to you to determine what’s important to buy for your play style. Ghost 1.0 is challenging in a very organic way with a healthy learning curve that both tests you and allows you to move forward.

One significant topic I wish to bring up is the level of zoom in Ghost 1.0. Often, I found myself having to squint to see everything going on in the larger engagements. In most cases, there is plenty of black screen on the top and bottom of the screen that could have afforded a closer perspective. In general, this isn’t a problem. However, when difficult alarms trigger and enemies and tiny projectiles fill the screen, having some extra clarity would make a big difference.

The overall construction of the world itself is good as well. The level of detail put into the world’s mythos is wonderful and incredibly detailed. One of my absolute favorite moments is how you save in Ghost 1.0. You find 3D printers throughout the space station, which act as your save points. When you die, your ghost returns to a 3D printer, and a new robotic body is printed for you to inhabit. I loved this kind of concept in Nier: Automata, and I love it here even more. It’s this kind of detail that makes this narrative so palpable.

At the same time, the actual space station layout tends to repeat a lot of its environments. The 2D visuals are fantastic, but the few different sections of the space station offer minimal variety. Layouts are different, of course, as each area offers different challenges to overcome, but colors and styles remain the same for long periods of time. When a new area opens up, it’s a breath of fresh air. Still, that fresh air quickly dampens into a sameness. Granted, this isn’t the pure focus of Ghost 1.0, but the environment plays a key role in consuming a game like this. I found myself looking at the map to get around more so than remembering what each room looked like in relation to each other.

Ghost 1.0 Is A Wonderful Metroidvania

All in all, Ghost 1.0 is one of those charming indie titles that almost anyone could pick up and succeed in. An organic, welcoming learning curve keeps you on your toes while still helping you along just enough to succeed. With fantastic writing and long-winded replayability, Ghost 1.0 is a must-play Metroidvania for anyone looking for something new.

Ghost 1.0 has the heart of a beloved project and the soul of the best Metroidvania games in the industry. Despite its few quirks, the balance between accessibility and challenge, coupled with intriguing writing makes Ghost 1.0 a worthy pickup for even those with some curiosity about the game.