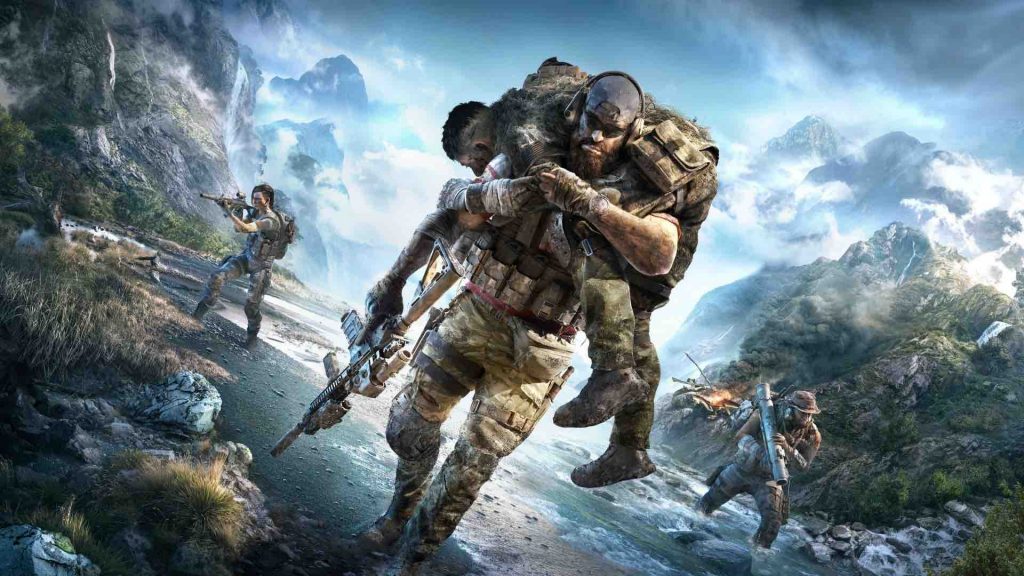 Is Ubisoft’s mix and match formula a smart business move? Absolutely. By having a core set of gimmicks and mechanics shared between the likes of Watch Dogs, Assassin’s Creed, Ghost Recon and the like, it likely keeps costs down to spend in other areas and keeps the turnaround fairly swift. Is it a guarantee of consistently good games? On the evidence of Ghost Recon Breakpoint? That’d be a no.

Breakpoint is somewhat of a spiritual sequel to 2017’s Ghost Recon Wildlands in the sense it’s about the same rent-a-squad ‘heroes’ from that game, it’s set in a huuuuge open world, and features many of the same mechanics (mostly because, as already mentioned, that’s the current formula for Ubisoft open world titles).

It replaces the America saving a country from drug wars by shooting everything theme of Wildlands with a story of survival as the squad tries to survive on the fictional South Pacific island of Aurora, which is housing a tech-heavy presence that unfortunately has been taken over by a rogue group of former Ghost Recon soldiers called the Wolves (led by a game Jon Bernthal). Your job is to uncover the mystery of why the Wolves are doing this, and to liberate the island from them so the hi-tech murder machines they now possess.

Aside from Bernathal’s turn as the villain of the piece, it’s a thoroughly unengaging story. The kind you’d imagine the late Tom Clancy might have written on a particularly bad day, and instead of putting it in the bin, he accidentally published it.

It brings a futuristic bent back to the Ghost Recon series at least, with its nanobot clouds and army of drones being deployed alongside the more traditional meaty fodder. The other thing it brings via the story’s opening, is a need to survive behind enemy lines. Yes, Ghost Recon has added survival sim to its many-stringed bow, and arguably, that’s the string that snaps the lot.

Now you have to scrounge for weaponry and clothing, treat wounds, be wary of steep inclines, wear a jumper when there’s a chill in the air, take out life insurance, and remember to set up a pension fund. Ubisoft really wants you to feel like a soldier trying to survive in a hostile environment, feel like death matters but ends up making a list of dull chores that you can respawn into, albeit often a considerable distance from the place you were before.

Thankfully there are vehicles to traverse this tricky terrain, but they still make for a long-winded journey, meaning helicopters are the most essential thing you can get your hands on in Breakpoint, but given how tough that can be to obtain with the focus on survival causing the simplest errand into a war of attrition, it’s just another largely thankless chore to add to the list. The open world is once again staggeringly huge, and never has it fit so ill with the focus of a game. If Ubisoft were going for something about the futility of existence via repetitive trudging then bravo, it got me there.

The combat, already a bit messy in Wildlands, has only got worse in Breakpoint. You’re now more often on the defensive than before, which was the weakest aspect of combat in Wildlands because the shooting was less than pleasant. Both games excel when you have the upper hand through careful planning and surveillance, but in Breakpoint, the opportunity to do so is rarer because you’re on the back foot most of the time. It’s another case of the survival focus just not gelling with what was left over from Wildlands, and indeed, a bunch of other Ubisoft titles.

There’s a bit too much of The Division 2 about Breakpoint, but with none of the relative restraint and pacing that that game employs. Breakpoint also tries to bring that game’s loot system in, and that’s perhaps the most farcical of its failures. There’s no rhyme or reason to the items you pick up, no real logic applied to why a piece of gear is in any way better than another, it just exists as a thing because of function in another game, but forgets exactly why it worked there.

You’d expect that maybe from a different studio entirely, ripping off the latest hot trends and not understanding what made it tick (Battle Royale, lootboxes, etc), but to get it so wrong within the same company? That’s worrying.

The decision to be online-only is a contentious one. You understand it because the focus is clearly on a multiplayer experience (it’s clear from how undercooked it feels in single player). But it adds something grim to the already laborious travel when a disconnect could set you back many, many kilometers. That the opening, a single-player focused tutorial in all but name, can be affected by this, is just plain daft. Regardless, you should never be punished for wanting to play on your own because your internet is having a bad day.

There’s still bright spots to be found, a glimpse at what the game might be with a year of tweaking and fixing. In isolation there’s moments where the stealth and survival combo feel right and the thrill is there. When you team up with others, a few of the wider grumbles fade via the medium of of fun with friends, and there’s fleeting moments of breathtaking beauty to the world.

Then of course, you soon get a reminder of the bad things. The needless bloat, the mindless loot system, the many technical teething troubles (to say the game has a few bugs is a bit of an understatement), and the simple fact that this is a big mushed-together glob of drab ideas all come flooding back.

Yes, you can overlook them and have a fairly good time with it, especially with others, which is clearly the idea given its always online state, but it’s still there, and weighing it against others in Ubisoft’s roster, it comes up short.

Ghost Recon Breakpoint is out now on PS4, PC and Xbox One.

Ghost Recon Breakpoint is a game crying out to be more straightforward, more-focused, but instead it’s added one more wafer thin gameplay mechanic after another, flying in the face of common sense, and now its bloated frame has exploded because it simply can not hold all that mess in and still function. A dull, frustrating misfire.