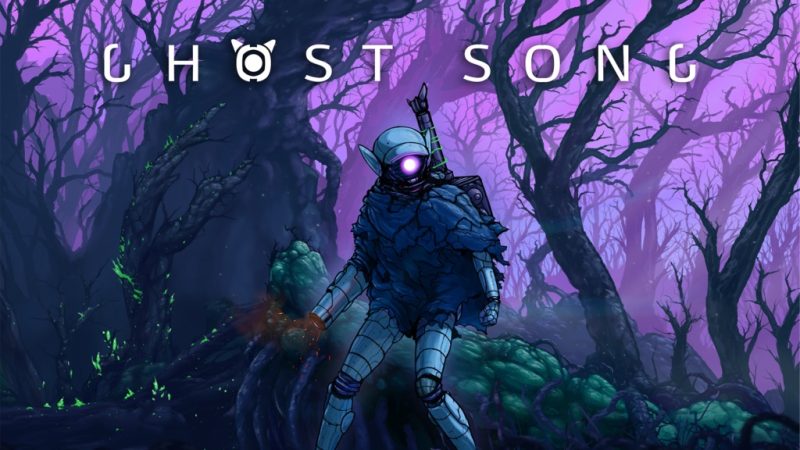 Ghost Song Review (PS5) – Old Moon‘s Ghost Song is the latest game published by Humble Games, who, in a run of fine form, have recently published the superb Moonscars, and the equally excellent Signalis.

Upon viewing the wonderfully atmospheric trailer, and being quite curious as to whether or not Humble Games could publish a hat-trick of great games, I had to check Ghost Song out.

A Somber Tone With Satisfying Gameplay

Ghost Song instantly makes a striking first impression. A somber tone, melancholic soundtrack and beautifully illustrated environments immediately set the stage in creating an atmospheric world, that you will be tasked with exploring in a non-linear fashion.

The opening screen, fading from black, will see you take control of a long dormant Deadsuit. The Deadsuit, inhabited by an unsure protagonist, starts off with an arm cannon, and some basic platforming abilities.

With no immediate objective, you set off, scratching the surface of Lorian, an inhospitable moon. Beginning down the cave systems, the game initially takes a stand off approach, not holding the players hand, allowing for a greater sense of oppressive solitude, which is a must for a game of this genre. Introducing you to the basics of games systems, where you can shoot from distance until your weapon overheats, which deliberately charges up your melee to get in close and deal big damage. This system works really well, especially as you unlock more firearm and melee variations, allowing for different combinations.

Initially, I took to using a scattershot primarily for a firearm when up close and personal, whilst using a spear for melee which made me approach enemies differently, but equally as satisfying as the other variations available.

As I got deeper into the game, my favourite load out was a combination of the rocket launcher, and using a wheel-like melee weapon to throw at the enemies, allowing me to manage most combat situations from range.

The more powerful firearms along with the melee attacks, have a meter in the hud that will need to recharge, so you will need to manage that during combat, which makes for the right amount of balance, as to not make things too simple. Equipping the weapons comes at a power cost. As you upgrade your vitality, primary weapon power, and resilience, you gain one level. With each level, you gain more power, which frees up more space to allocate more weapons or modules.

Modules are essentially passive abilities, but they can be very useful. Modules such as an extra jump, or brief invincibility during dashes are incredibly useful.

I also enjoyed using a module that displayed enemy health, and a dash upgrade that left behind a decoy tricking some enemies into attacking them. Managing the deadsuit’s power allocation is key when it comes to balancing the game, and makes for fun gameplay experimentation.

The powerful firearm upgrades, modules, melee weapons, and other items are a reward for exploring the desolate moon, so it pays to keep an eye out for secrets within the levels, as you might find your new favourite ability. When it comes to the enemies themselves, there is a good of amount of variety to keep you on your toes. The wandering antagonists and insect aliens of Lorian are not to be taken lightly, not to mention, there is some challenging boss fights that require a touch of trial and error.

It’s also worth noting that, when you die, you will take some permanent damage to your health bar. I particularly enjoyed the cinematic-like approach to some boss fights, with Old Moon’s excellent use of dialogue within them.

When you’re not in the midst of combat, you will be platforming around Lorian, unlocking new moves as you progress, such as dashing, double, and even triple jumping to reach new heights – all of which feel smooth and responsive. My only complaint is that being at your most powerful comes a little too late in the game.

Ghost Song always feels good to play, but some upgrades such as increased movement speed, are purchasable at a hidden vendor. This is simultaneously a great reward for exploration, and somewhat frustrating because I found it so late in the game. A Wonderful Supporting Cast Of Characters

Whilst Ghost Song is a very fun game to play moment to moment, I found its greatest strength was its incredibly atmospheric world, combined with an intriguing narrative, and superbly written characters.

Venturing through the twisting caverns of Lorian, stumbling across a glimpse of colour within the desolate world, felt rewarding on its own. Not only that, but the game rewards exploration with some really interesting story beats, that make it worthwhile.

The use of colour, illuminating the background, within a dank cavern, captures the exact somber nature the narrative is simultaneously executing, creating a beautifully melancholic experience. A gentle, subdued soundtrack will often complement the visuals perfectly. Ghost Song is a beautiful game, and it is absolutely oozing atmosphere. With such a well crafted, transcendental and quite serene aesthetic, it is only right then, that the characters are equally up to the task. The supporting cast were my favourite part of the game, which is high praise, given I adore almost every other aspect of it.

After some brief exploration, you will find a group of survivors who have crashed into the moon, and need certain parts to repair their ship in order to leave Lorian. Finding those parts is the core objective of the game, but returning to their camp and interacting with those characters is the highlight.

The characters are very well written, all of which have unique personalties, quirks, interests and desires. Learning about them as you progress, felt like turning the page on a book you can’t put down. A Story Self Discovery And Cosmic Horror

Whilst dialogue is often delivered through text boxes, the supporting cast are sometimes voiced to round out a conversation. This combination of text based and audible dialogue is tonally on point. The voice work feels like its punctuating the important moments, in an almost sorrowful yet charming manner.

My favourite character in Ghost Song isn’t a part of the main crew who crashed onto Lorian, but a drifter android named Saymund. He can be found in multiple locations throughout the game, and always has interesting dialogue and lore to divulge.

Beyond the endearing cast of characters, is a strong narrative that tells a story of identity, self-discovery, featuring a healthy dose of cosmic horror. All of these elements are tightly woven to create an often relatable, and consistently engaging story, anchored by those intriguing personalties you meet along the way.

A World I Wasn’t Ready To Let Go

There is not much in terms of replay value beyond Trophy hunting, and possibly playing the other difficulty mode, depending on which one you started with. However, I have already started a second playthrough as I enjoyed the world, and characters so much that I wasn’t ready to let it go. It is worth noting I did experience some minor screen tearing during my play through on PS5.

Despite Ghost Song feeling at its best late in the game, it does still feel great to play from the start, and it is aesthetically, both audibly and visually, very pleasing. This combined with the superbly written cast of characters and an intriguing narrative makes Ghost Song one of 2022’s best games so far.

Ghost Song is out for PS5 and PS4.

Old Moon has crafted a delightfully atmospheric metroidvania, with satisfying gameplay, and endearing characters. Ghost Song boasts an intriguing narrative of self discovery, with a world of mystery that rewards exploration. Despite playing at its best too late in the campaign, Ghost Song is a beautifully somber, sometimes relatable experience, that I wasn't ready to leave by the time I had finished.