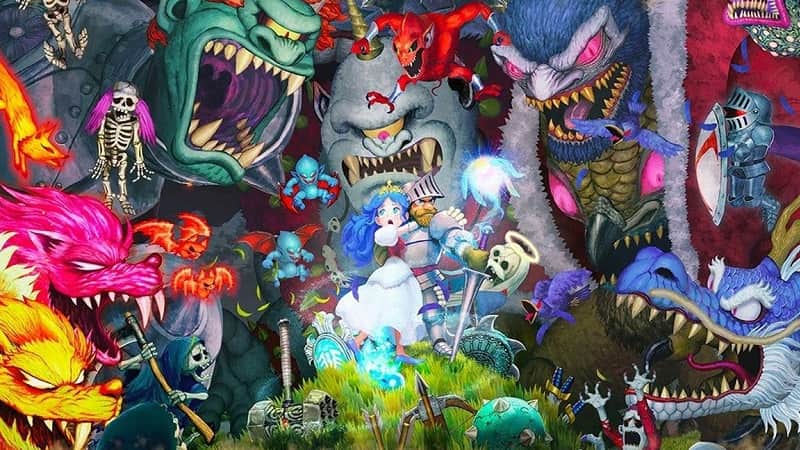 Ostensibly where Capcom have struck gold however, is in how the Japanese developer has absolutely maintained the black beating heart of Tokuro Fujiwara’s seminal arcade opus alongside the implementation of all-new features which serve to compliment the game rather than detract from it.

Certainly purists need not worry; this is Ghosts ‘n Goblins through and through. As charmingly goofy knight Sir Arthur, players must venture from left to right, making tricky leaps and destroying all manner of, well, ghosts and goblins that foolishly come across your path. From Arthur’s over-exaggerated running animation to the immediately recognizable graveyard stage and every enemy type that you tangled with back in 1985, this feels and plays like Ghosts ‘n Goblins. 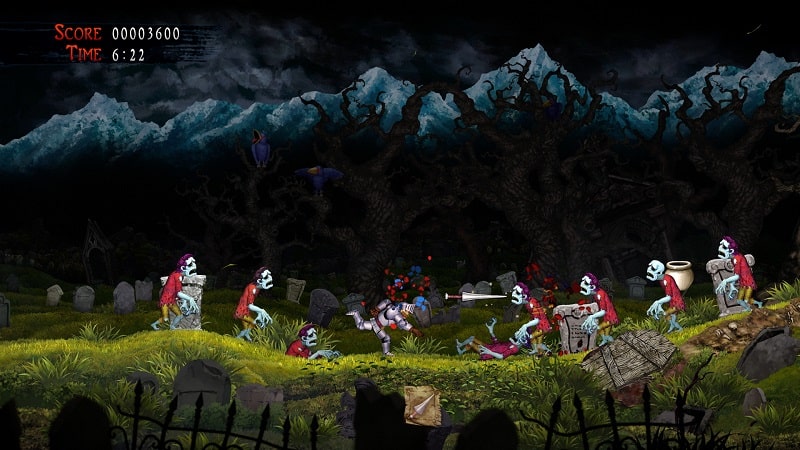 So too does the core gameplay loop make it across intact too; as there are a number of different weapons that you can collect, with each having unique properties that allow you to destroy your fiendish foes with aplomb. Essentially, if you’ve just been playing Ghosts ‘n Goblins either on its own or as part of the recent Capcom Arcade Stadium release, you’ll be able to hop straight into Resurrection with little effort.

It’s worth noting that in sticking to its storied lineage, Ghosts ‘n Goblins Resurrection is unapologetically difficult and its reputation as one of the hardest games of all time is certainly well earned. This is a game that seems tailor made for ushering in a whole new generation of Twitch gamer rage videos, as every aspect of its design appears to be precision engineered to raise a middle finger to the player and cause stress veins to burst from their face.

A moving platform above a pool of insta-death water might change its pattern for example, causing you to jump to your death, instead of staying still, while a differently placed enemy could send you to your doom when you least expect it. As much as the rock hard difficulty of Ghosts ‘n Goblins is baked into the very design DNA of Resurrection, so too is the feeling of reward and satisfaction as you pick your bones up off the floor and try again. Ghosts ‘n Goblins Resurrection is all about dying (a lot) and then getting a little better each time and hopefully dying less in the future – though depending on how bad your temper is, your mileage will vary. 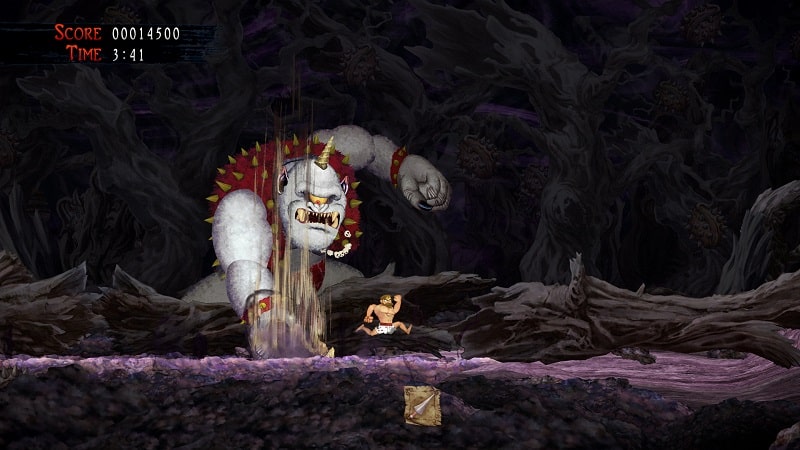 Neatly, Ghosts ‘n Goblins Resurrection also provides ample incentive for players to up their game too, as a number of secrets and other features only become available in the higher difficulty levels. As such, this helps to bolster the allure of try and try again which is precisely the sort of maxim that Ghosts ‘n Goblins has thrived upon for decades. Beyond the employ of the eight different weapons that were initially glimpsed in the original arcade release, Ghosts ‘n Goblins Resurrection also allows Arthur to use a variety of different magics to devastate his enemies and improve his chances too and this is where one of the biggest new aspects of this remake come into play.

You see, dotted around every level are creatures called ‘Umbral Bees’ (think of them as Will o’ Wisps, essentially) and once collected, Arthur can trade these bright little creatures in for new spells and abilities in between levels, including such upgrades as columns of fire, the ability to turn into a boulder(!) and even a spell that can help to revive you from death’s door. What this does is help to turn the tables slightly while providing substantial incentive for players to hunt down each and every Umbral Bee. 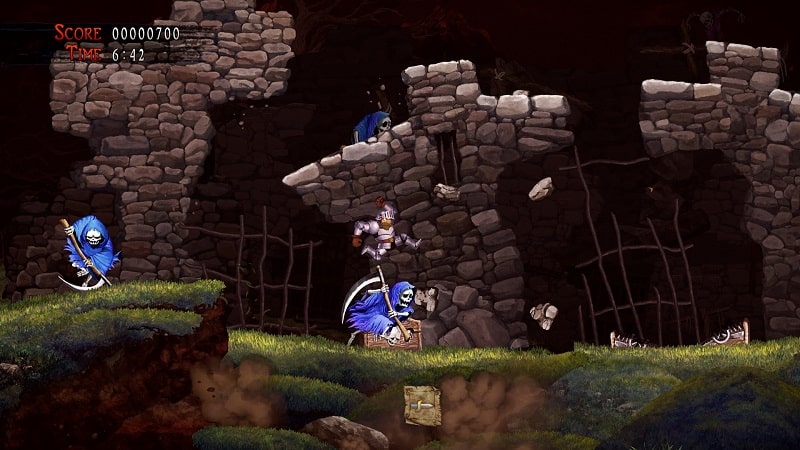 In addition to this new progression system, Ghosts ‘n Goblins Resurrection is also bursting with a wide range of secrets which prompt yet further play and investigation. Hell portals for example, can open up on any given stage, allowing players the chance to score some precious armor regeneration or a bounty of extra score by staying alive for a fixed period of time, while once the game has been completed, players can go back through a play ‘shadow’ versions of each level where the enemy and trap placements have been rejigged, providing yet further challenge still.

And then there’s the shiny new visual presentation of Ghosts ‘n Goblins Resurrection. Clearly something of a stylistic departure from its retro origins, Resurrection embraces a painterly, picture book art style which matches the offbeat, slightly humorous themes of the game pretty nicely. Character models and backgrounds have also seen wholesale changes too. Running off of Capcom’s super flexible RE Engine, Ghosts ‘n Goblins Resurrection manages to not only look super fresh but also pays proper homage to its arcade origins too (honestly Arthur’s running animation still elicits a chuckle, even today). 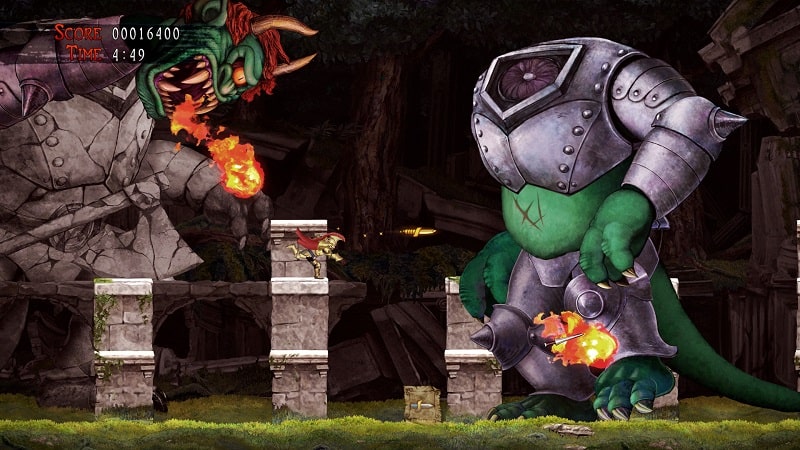 Make no mistake then, Ghosts ‘n Goblins Resurrection is a handsomely crafted reboot that deftly walks the tightrope between maintaining the soul of the original while innovating with a range of all new additional features. Though it’s perhaps stating the obvious, the fact remains that this is still a Ghosts ‘n Goblins title, which means that this game is out to break your patience, your spirit and your heart with death after death.

This means that if you’ve got the stones to withstand the absolute barrage of challenge that Ghosts ‘n Goblins Resurrection will batter you with, then you’re in for a treat. For everyone else however, and despite the bells, whistles and overtures to newbies, Capcom’s latest attempt at retro-reanimation might still prove to be a bitter pill to swallow – and I wouldn’t have it any other way.

A textbook example of how to meaningfully update to a classic title while keeping the core appeal intact, Ghosts 'n Goblins Resurrection is a superb way to experience Capcom's arcade classic for both new and old fans alike.