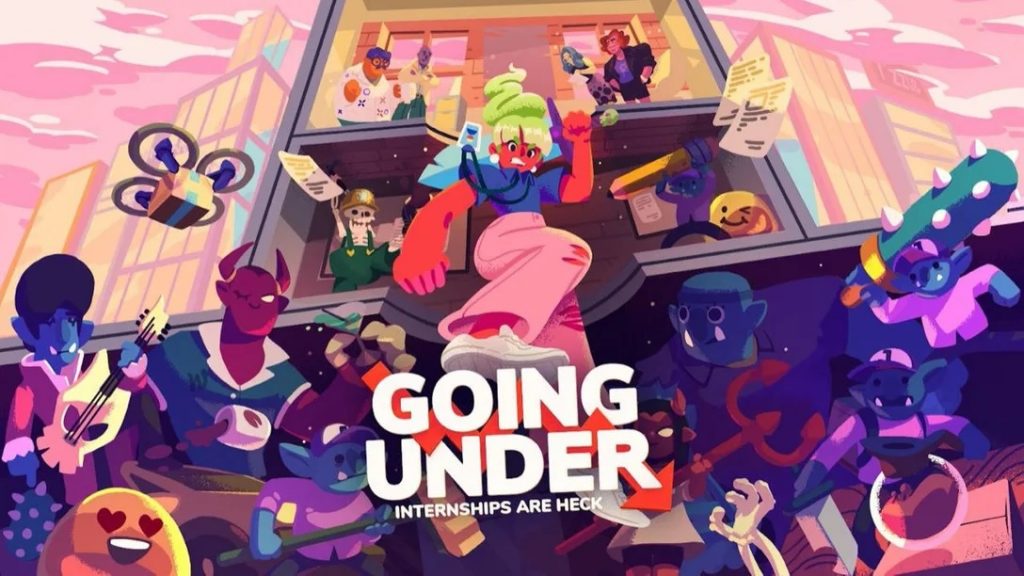 Going Under PS4 Review – Going Under is Aggro Crab’s first foray into game development and boy is it a bizarre one. They have brought a third-person workplace-based roguelike dungeon crawler to the PlayStation 4 and I don’t think there is a game like it currently on the market. It is certainly unique, I am not sure where the gameplay and story combination came from but it’s unquestionably something new. So, leave your cubicle, drive up those profits, and try and succeed in the fast-paced world of tech start-ups.

In Going Under you play as Jackie, a plucky intern who is striving to work her way up the company ladder, but before you have even settled in you are given a massive shock as it turns out you need to go and slay some beasts. What kind of company is this? This is definitely not what I signed up for and before I could even blink, I was picking up a keyboard and belting zombies with it in the underbelly of the company I work for. Something I have dreamt of doing at work many times, weirdly.

The whole theme of Going Under is a mocking take on the state of businesses and capitalism. You work for Fizzle, a fizzy drinks company who are taken over by a massive corporation called Cubicle. The story tells tales of disgruntled workers, pushy mega-corporations, and struggling smaller tech start-ups. As someone who has seen all this in the flesh, a lot of the themes struck chords with me. The game does briefly touch on other smaller storylines, such as machines taking over the work of humans and more smaller issues. Everything is done in a very tongue-in-cheek, meme-like manner that may not appeal to everyone, I did not mind it though.

There is a lot in Going Under that is immediately recognizable. Smartphone apps, cryptocurrencies, electronic smart speakers, and massive company changes all feed into a satirical story that frames this roguelike dungeon crawler. I am not sure why this setting was chosen for a game of this ilk and I am not sure it even works too well but I did, at times, enjoy it. The whole thing is a bit uncanny but that is not necessarily a bad thing. There is nothing wrong with being a bit weird. Just ask my family.

Under your company, there are three randomly generated dungeons that are all previously failed tech start-up companies. You are tasked with descending into them, defeating their bosses, earning loot and emerging victorious. While you are in the game’s main hub, the offices, you are given small tasks from your boss and colleagues and must try to accomplish them while dungeon diving. As with most roguelikes, there are purchasable upgrades for each run into the dangerous basements of Sizzle that you can purchase with your rewards.

Each dungeon has a theme, each one contains a randomly generated dungeon and each one contains all the standard roguelike features one would expect. Shops, challenges, characters, and weapons litter each run through the dungeons and every run certainly is unique. There are weapons scattered everywhere and they all break very often as if they were made of polystyrene. This is not as bad as it sounds though, it forces the player to try different weapons and always be on the lookout for different things to poke your enemies in the eye with.

One feature that I really liked and that I think a lot of players will enjoy too is the variable difficulty settings. Roguelikes are not for everyone and some people just don’t ‘get’ them. Some players find them too difficult and like a more rigid approach to gaming. In Going Under there is a massive batch of toggles to make the game easier. From more health to better weapons and from weaker enemies to more invincibility when hit. This makes Going Under as easy or as difficult as you see fit and makes sure anyone can get stuck into corporate dungeon crawling.

Graphically, Going Under has a very unique art style. The characters while talking look like they have been drawn with crayon and the game has a very Saturday morning cartoon look about it. I was quite taken with the graphical presentation of this title. It looks like no other game I have played and it fits the style of the game and it’s weird setting perfectly. Even the conversations are displayed in coloured bubbles like messages on a phone app, again perfectly fitting into the whole technological look the game is going for.

Soundwise, while it does not hit the heights the graphical presentation does, it does its job OK. The sound effects are good, the music is good, if not very memorable, and I would have perhaps liked some voice acting thrown in. Even if it was only a bit, it would have added so much more life to the characters and fleshed out the story a bit more. On the whole, though, the music does fit the breezy nature of the game and can even make smashing enemies over the head seem joyous.

While I quite enjoyed my forays into the underworld of Fizzle and its various dungeons. Compared to my favourite roguelikes, it falls a tad short. It lacks the metagame of things like The Binding Of Isaac or Spelunky and definitely lacks the substance or Style of something like Hades. If you are looking for an easy to get into roguelike or a roguelike that has a plethora of difficulty modifiers then this game could be for you. I just think there are far better examples of this genre elsewhere.

What Going Under does have going for it though are its unique presentation, uncanny story and its broad appeal. The game is like a roguelike-lite. If you have not played the genre before, Going Under could be a good place to start. The characters are fun, the art style comical, and its story topics are very current and up to date. It’s a good game but roguelike veterans may find it a bit superficial but let’s be honest, not everyone is a roguelike veteran.

Going Under is out now on PS4.

Going Under is not a bad game, its story is fun, sometimes witty, and at times, a tad meme-like. If you play a lot of roguelikes you may find it a bit thin on the ground. However, if you are new to the genre, want something a bit lighter, or just want to try something a bit different Going Under may be for you. It has a depth in its difficulty options, it looks very nice, and plays well. I think it just depends on what you are looking to get out of the game. There is stuff here to like, it is just not for everyone.