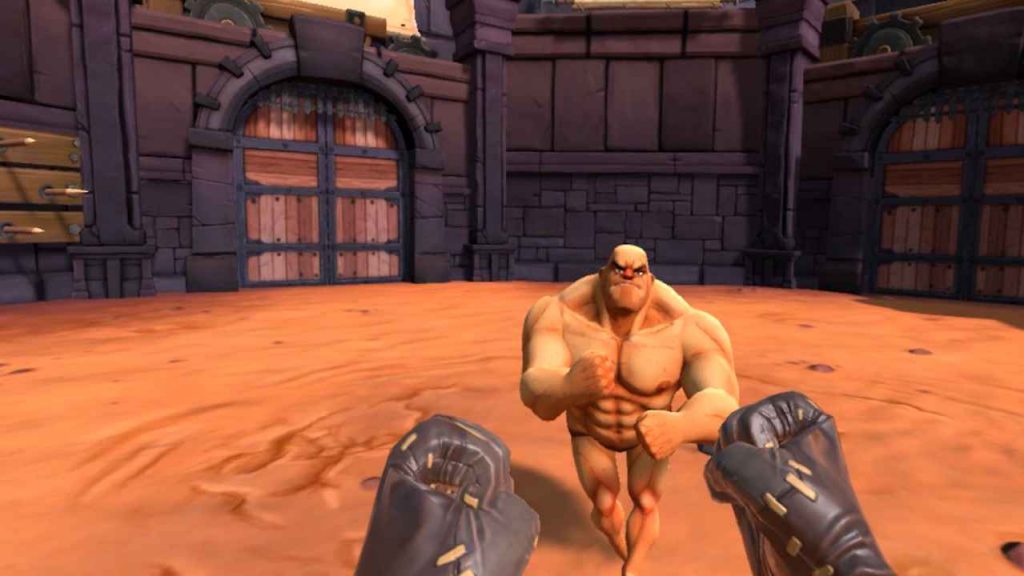 GORN PSVR Review – When I was in high school, I jokingly came up with the idea of “The Pig Room”. I imagined an offshore private island, where pent-up middle-aged businessmen could pay thousands of dollars to be put into an enclosed white room. They would be given minimum weaponry with no training whatsoever. A small door would open in the wall, and a wild boar would be sent into the room. The businessman would have to muster all of their suppressed caveman instincts to do battle with the pig and survive.

Don’t be me wrong, I have nothing against pigs, and I’m not excited by the torture and murder of animals. I was more making a comment about the nature of humans in modern society, and how out of touch we are with the instincts that allowed us to conquer (kind of, for now) the planet. My idea was that there is a raging beast inside of every human, a Viking warrior that thirsts for battle, dreams of combat, defeating enemies, and gaining unquestioned dominion over others. Some part of modern man wants to just cut loose and destroy shit. Why do you think we have sports?

Press Pause On Your Higher Intellect

At least, that’s what my high-school-age self thought. And I must admit that as much as the “Pig Room” made me giggle (particularly when describing my grand ideas in great gory detail to horrified audiences), much of the impetus for the concept came from my repulsion and discomfort with mankind’s baser instincts.

It doesn’t matter how much my views have changed over the years. What matters is that GORN – the new cartoonish gladiator simulator on PSVR – taps directly into the exact qualities that I was describing when I would regale my nauseated high school lunch table companions with elaborate tales from the “Pig Room”.

I am now a middle-aged businessman. Things in the world haven’t been going so great lately. I have a lot of pent-up energy and a fair amount of rage that I have nowhere to put. And along comes GORN – a goofy-ass digital version of the “Pig Room” that allows me to go insane for a little while in my living room, going full caveman on any stumbling dummy that gets too close to me. I can turn my brain off, and simply attack. And attack. And attack. I can do simulated battle with the metaphorical pig.

In GORN, I can grab any idiot that staggers into my path (imagining that they are some vapid, flaccid politician), and hit them in the head with a rock until their eyes pop out and their head explodes. I can then pick up their body, and rip each limb from it, finally hurling the bloody torso at their compatriots before charging them with abandon.

This is GORN, and it feels bloody amazing.

Maybe It’s Not That Serious

I admit, my reaction to GORN may be saying more about me and my current state of mind that it is about the quality of the game. But let’s call it like it is – there is a reason that GORN is one of the most popular VR games on Steam, and that reason doesn’t involve the quality graphics or the Goat Simulator-level of AI programming. GORN is popular because it allows modern humans to engage in some simulated carnage, and that experience is visceral and exciting.

However, before anyone gets the idea that GORN is some sort of videogame murder simulator, training armies of budding psychos to go into the world armed with flails and maces to do damage, I should specify that GORN has its tongue planted firmly in cheek. The beanbag people that one battles in GORN has such little resemblance to actual humans that they might as well be straw-stuffed scarecrows. Indeed, the game allows for a Pinata-mode that sprays candy all over the arena in place of blood and gore. The creators of GORN have tapped into mankind’s baser instincts, but they aren’t lunatics.

GORN’s violence is so cartoonish that it is only a few steps removed from an 1950’s-era Looney Tunes cartoon. And the bumbling gladiators that stumble into the arena are basically there for players to savage with a variety of weapons while offering little resistance (I call them “Lennys”, as in “Tell me about the bunnies, George.”).

The entire endeavor is just good adolescent fun, as savage and primal as that fun may be. Yes, you are engaging in acts of brutal violence, but no one is getting hurt. Rather than being repugnant, the violence in GORN is so over the top that it’s often laugh-out-loud funny. Spending some time with GORN will likely do your psychological state more good than damage. In fact, GORN is a good workout. It’s a win/win.

Enough Intellectual Blathering – How Does Gorn Work On PSVR?

GORN has made the transition to PSVR surprisingly well. The graphics look about as good as they can. Gorn was never a graphical powerhouse on PC, but the silliness makes the transition to a standard PS4 quite well.

The issue of PSVR’s single camera is somewhat more problematic. Don’t get me wrong, the camera works fine. But the nature of GORN’s gameplay is deeply physical. You use the Move buttons on your controllers to grab the world and pull yourself about, turning with face buttons. Weapons and shields are grabbed with the triggers, and wielded as you would expect. There is a lot of flailing and bashing involved. The arena is circular, so guys can come at you from any direction.

Due to the visceral, physical nature of the gameplay, you can’t help but get turned around in the heat of battle. The PlayStation Camera does a remarkable job of tracking the controllers when you are facing away from the camera, but there are limits to what it can do. I found myself readjusting physically in my play space about every five minutes or so. I tried to play seated – just to stay in place – but you can’t battle sitting down, so I quickly ditched the chair and stood again. In the end, a concerted effort to keep my feet planted in place was required.

Players should also be very careful about clearing the room in which they play. Not only of objects, but also of children and pets. You don’t want to accidentally punch the dog while you are cleaving some cyber-dummy in the arena. The reports in Steam reviews of broken controllers, lamps, and faces are absolutely believable in this regard.

Gorn Isn’t Just Carnage – There Is Actually A Game Here

Believe it or not, there is some actual structure and strategy at work in GORN. The game is not just wanton carnage. Players take on a series of arenas, each of which has a progression of weapons and opponents.

Opponents never get any smarter, but they do get better gear. As the game progresses, you will be challenged to figure out ways to work around their increasingly effective armor, while dodging their better weapons. Of course, its pretty easy to strip those weapons from opponents and wield them to your benefit, but you will still likely find the game somewhat challenging before it’s all over.

Just one hit from an opponent will start you bleeding out, and you will die quickly unless you kill another opponent. It took me a while to figure this dynamic out, as the game never explicitly state it. I kept waiting for my wounds to heal, causing a lot of frustrating and misunderstood deaths. You will fight any number of opponents – including free-for-all battles in which opponents turn on each other. I often found myself pinning my back to a wall and playing defensively, as wandering out into the fray would leave me open to rear attacks.

Of course, all of this strategy is really just in the name of allowing new methods of carnage. Bash skulls with rocks and maces. Sever limbs with swords and…crab claws. Battle the weird guy that unleashes wild beavers into the arena. Hoot with unabashed laughter the entire time. A few additional modes are quickly unlocked as well, including an endless battle mode (survive as long as you can), and a customizable mode that allows you to design your own battles with a number of fun options. Weapons and other goodies for this mode are unlocked in the campaign, so its best to play through that in its entirety first.

So yeah, GORN feels pretty great. And you can visit a modern version of the Pig Room for twenty bucks – a deal if there ever was one. When you remove your PSVR helmet, sweaty and sore, a bit of that twitchy energy (and existential dread) has been expended, and you can go back to your family lock-in feeling somewhat relaxed.

Just make sure you leave the TV off while playing GORN, so the kids don’t see that Daddy is grabbing a morning star by the ball and bashing it into someone’s head until it explodes. You know that you are just having a good time, but the family might look at you differently if they knew what you were doing.

GORN is out now on PSVR.

GORN is a bloody good time, arriving right at the moment when we need it most. Some strategy is hidden beneath all of the gore and carnage, though you might find yourself just dipping into GORN to bash some heads for a few minutes. While there are some technical limitations brought on by the PlayStation Camera, GORN works pretty well on the PSVR. As both a workout and a psychological enema, GORN succeeds wildly.