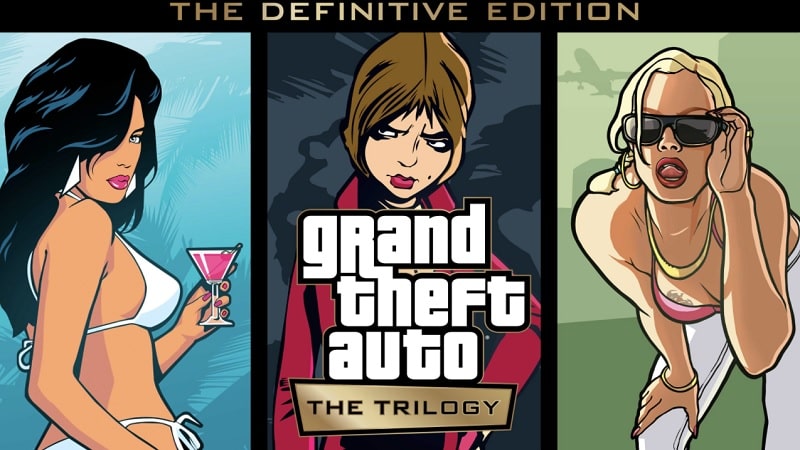 Grand Theft Auto: The Trilogy: Definitive Edition PS5 Review. What GTA fan wouldn’t enjoy the prospect of updated versions of Grand Theft Auto III, Vice City, and San Andreas? That’s clearly what Rockstar banked on when it announced a remaster of the famous trio of sandbox crime games. A visual touch-up, some quality of life improvements, and the same core experience that won hearts and minds during a golden era of gaming history. That would be great, right?

Well, what should have been a celebration of three of the most important games of the PlayStation 2 era has become a parade of memes and hysteria. Underneath the drama surrounding Grand Theft Auto: The Trilogy: Definitive Edition’s uneven remastering, is everything really all that bad? The answer is of course, a bit more complicated than a simple yes or no.

An Uneven And Flawed Remastering Of A Genre Defining Trilogy

Part of the problem feels like a result of a misunderstanding of the difference between a remake and a remaster, these are largely the games they once were, 20-year-old flaws and all, but that certainly doesn’t absolve this remaster of some less than original sins. The remasters have been handled by Grove Street Games, responsible for the handling of previous console and mobile ports of these games. While those were simply buffed-up versions of the original titles, this trilogy remaster is something a bit more ambitious, and perhaps that’s the most significant factor in what has and hasn’t worked with the trilogy. 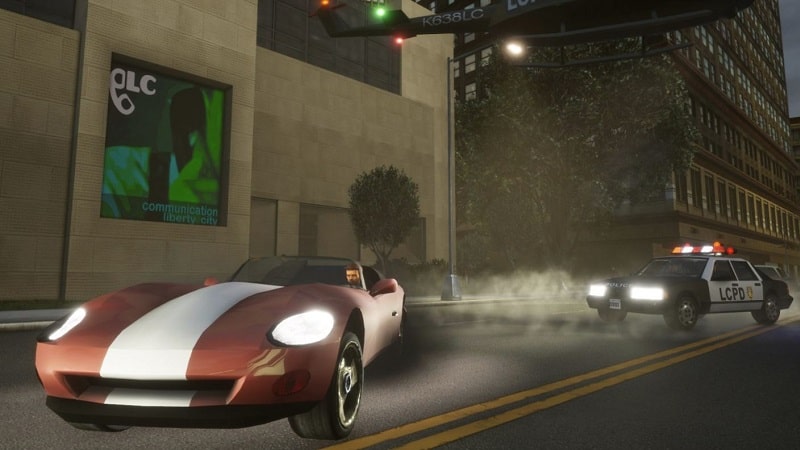 First up is Grand Theft Auto III. This is the game that changed everything, often left skulking in the shadows now when compared to its successors. It’s somewhat amusing then that it’s probably got the most consistent level of remastering quality of the three. Protagonist Claude Speed gets betrayed by his partner in crime and ends up incarcerated. Luckily for him, a high-level criminal is on the same prison transport route, and when they break him out, Claude escapes with fellow prisoner 8-Ball. So begins a rags to riches crime epic in a fictionalized approximation of New York, where Claude will buddy up and go to war with all sorts of nefarious crime syndicates on his way to the top.

Grove Street Games has managed to maintain the cartoonish visual style of the original whilst updating it just enough to make it softer on the eyes. Characters tend to look more detailed (for better and for worse), and without the limitations of older hardware, Liberty City can now been seen in greater detail. That personally put the city I have memorized for the past 20 years feel a little alien in places, because suddenly I can see across the water to the other islands and the gloomy atmosphere is lightened somewhat. It still manages to retain the grey and grimy feel of Liberty City, just differently. This ends up occurring in all three games, but only in Grand Theft Auto III does it work.

It’s also quite remarkable to witness Grand Theft Auto III running at a higher, smoother framerate. It’s not exactly buttery smooth, but it makes the dated aspects of the gameplay a hell of a lot more tolerable. 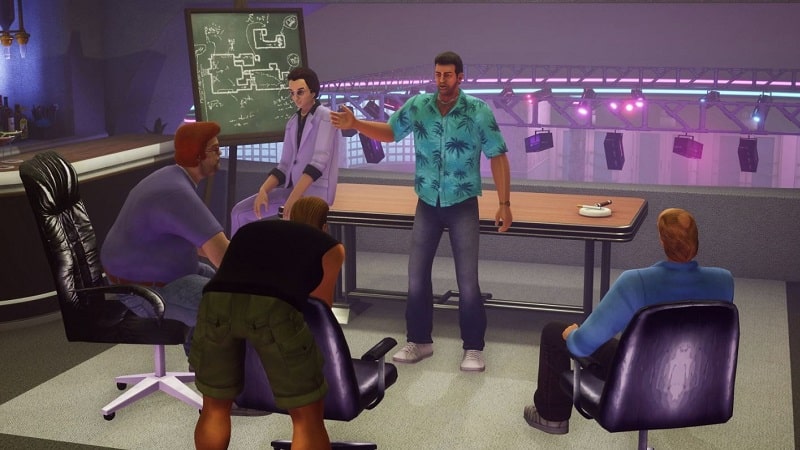 In pure gameplay terms, Grand Theft Auto III benefits most from the quality of life changes. The aiming system isn’t amazing by any means, but it’s a step up from what it used to be. Having the weapon wheel of Grand Theft Auto V, complete with slow-mo, is also welcome as it cuts out those precious seconds spent cycling through weapons while you’re being shot at. The most merciful upgrade however is the one that allows you to immediately retry a mission instead of lumbering all the way back to the start point of it with lighter pockets and likely a smaller arsenal. It made some of the more infuriating missions a lot less stressful.

It does feel quite small now though. The lack of illusion, the rather brief runtimes of the radio stations (those ads are still great though), and the relatively limited number of tools at Claude’s disposal are stark when weighed against the other two games in this package. It does make for a fascinating look at the rapid evolution and ambition of Rockstar’s series over a handful of years.

Vice City doesn’t come off too bad here. The neon-drenched, Miami Vice-inspired aesthetic is instantly striking (if a bit oversaturated, which is thankfully, easily fixed) and Tommy Vercetti’s journey to the top of drug-dealing business under the sun has a lot of character not present in its predecessor. You can debate on how a redesigned Tommy looks, and bemoan certain soundtrack omissions, but largely, this captures the game you knew with a few bells and whistles. 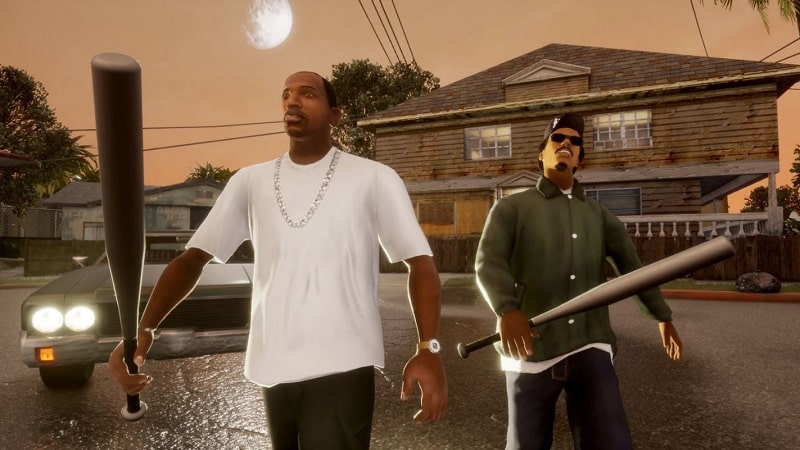 As with Grand Theft Auto III, Vice City greatly benefits from the quality of life additions, and the general upgrade in experience from Grand Theft Auto III feels far more comfortable with the changes. I can’t say Vice City has ever been my favourite GTA title, but it’s still undoubtedly a cracking game to go back to. The real problems come with Grand Theft Auto San Andreas. At the time, San Andreas’ scope and ambition were absolutely mind-blowing. It goes above and beyond what Vice City did in so many ways, and is easily the funniest of the PS2 era entries, with the best protagonist in CJ. That ambition seems to be a bridge too far for Grove Street Games’ attempt at remastering it.

Of the three games remastered here, San Andreas is the most wildly inconsistent in terms of quality. All three games contain a multitude of their original bugs, glitches, and exploits, but San Andreas seems to have picked up more fresh ones than the rest. The upgraded visuals have their moments here. The forests look amazing, for instance, but from secondary characters to shop signs the quality levels fluctuate from one instance to the next. Much has been made of the rain effects in these remasters, and while I don’t think it’s too at odds with Grand Theft Auto III, it looks utterly awful in San Andreas.

It really is a travesty that San Andreas gets shafted here because of the three, it stood to benefit the most from a gentle nudge into a new era. What you can’t sour about the game is the writing, and the characters, which mostly hold up surprisingly well given the guttermouth snark it possesses. Obviously, experiences with this trilogy can be different from person to person for various reasons, but even the most apologetic of GTA fans can’t deny these remasters could have been so much more. This year alone we’ve seen respectful remasters of Quake and Alan Wake, both of which vastly improved the original experiences without compromise. 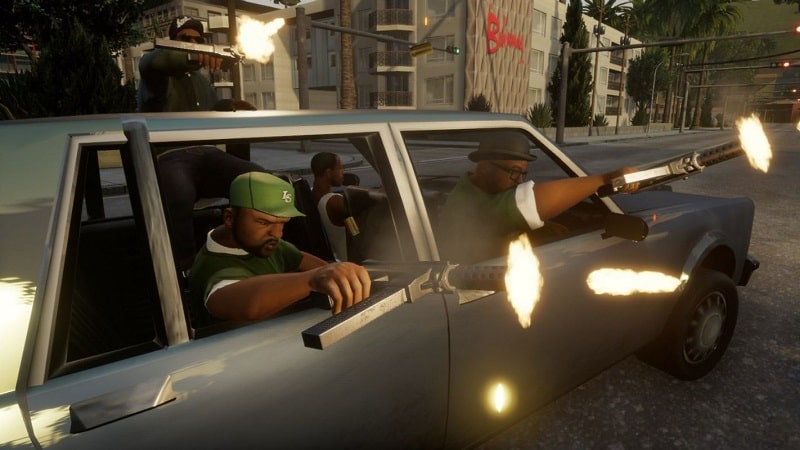 Despite the issues, old and new, I enjoyed my returns to Liberty City, Vice City, and yes, even San Andreas, but I’ll admit a lot of that comes from nostalgia. I do think there’s been a meal made of some issues here, but Rockstar could easily have nixed a lot of that by being more open and less ambiguous about what these remasters entailed.

More importantly, Rockstar, a company that puts more and more years into its games to ensure they meet the studio’s ambition, shouldn’t be allowing corners to be cut in restoring its very important legacy as they have been here. Hopefully, time and effort on the part of both publisher and developer will rectify some of this. For now, however, approach with caution.

Grand Theft Auto: The Trilogy Definitive Edition is out now on PS4. Please note – all three games were reviewed on PS5 and thus benefitted from improved performance and visuals where noted.

Grand Theft Auto: The Trilogy Definitive Edition isn’t exactly the disaster it’s been made out to be, but it is still a frustrating, underwhelming attempt to modernize three very important games. The quality of life improvements are generally welcome, and in many places, there’s a faithful upgrading of the iconic visual style of the PS2 era titles. Unfortunately, not every change is welcome, and in the case of San Andreas, perhaps a little less of it might have done it a few favours.