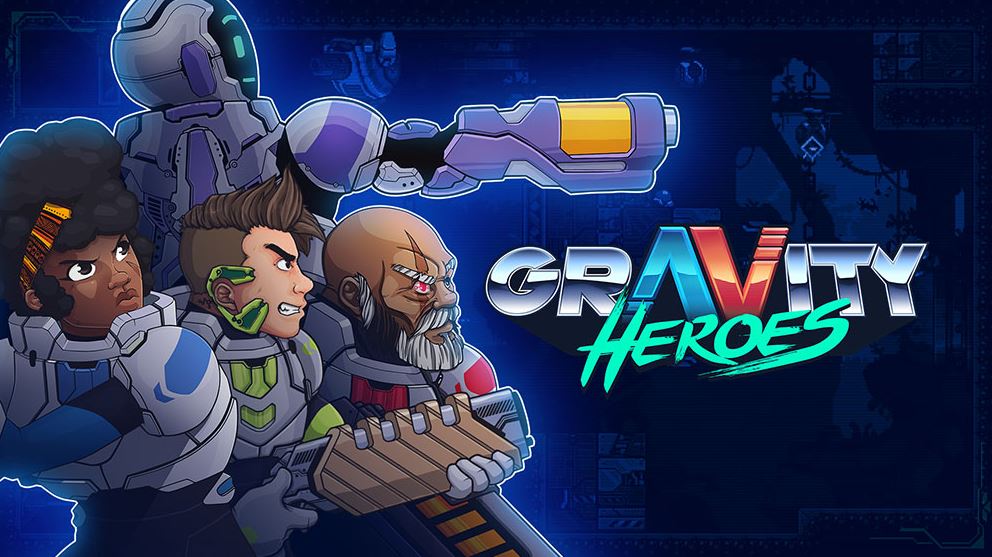 At its best, Gravity Heroes is a unique retro shooter with some fun mechanics. At its worst, it is unfortunately tedious. Gravity Heroes was clearly designed with co-op in mind, but that focus has apparently left the single player experience with much to be desired.

Hints of Nostalgic Charm In An Otherwise Average Visual Experience

Gravity heroes is a mixed bag when it comes to the visuals. The initial menu screen has a nostalgic charm, and us fun to use. After that initial impression, the first levels of campaign will reliably deflate any enthusiasm. Grimly coloured and uninteresting in detail, there is very little to get you excited. Despite the bad start, the same can’t be said of all of the campaign. There are some nice futuristic pixel art backdrops, and generally more interesting environments as the game progresses.

Gravity Heroes boasts 25 unique enemy types, and they add a lot of flavour to the game. Each sprite has its own animation to telegraph attacks, and besides being helpful, it also adds some much needed visual complexity to what could be a very monotonous screen at times. The player sprite animations similarly have a charisma about them. It’s almost enough to alleviate their painfully shallow personalities. 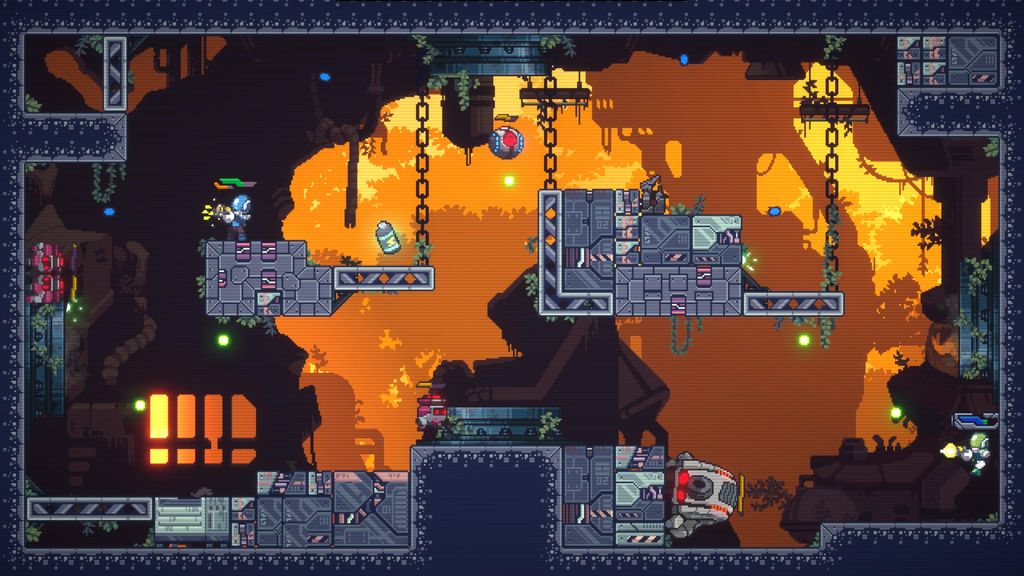 A Mostly Basic Shooter With An Interesting Gravity Shifting Mechanic

The gravity altering mechanics take some adjustment to get used to. So much so, that you find yourself expecting every other game you play to work the same way. It works most enjoyably in the boss battles, which are generally the best part of the game.

Besides the gravity mechanic, it’s quite a basic shooter. There is no aiming. You can only shoot in the direction you’re facing, as the right stick function is dedicated to gravity altering. It is a limitation that necessitates using gravity changes to align your shot, so it’s an understandable part of the design. However, more often than not, it feels a little tedious to use.

You can pick up randomised drops such as weapons and support items to give more variety to the action. Certain guns, such as the bouncing bullet gun and the shotgun can, amplify the scope of your attack. These somewhat alleviate the tiresome aiming restrictions, but most of the weapons aren’t anything to be excited for. The grenades, in particular, felt fairly useless. 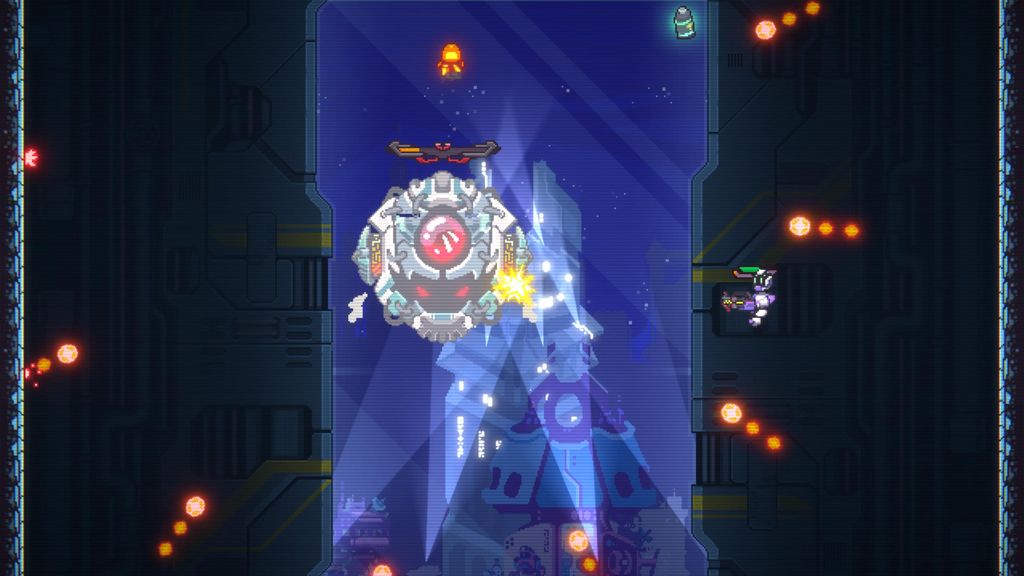 Bringing Single Players Crashing Back Down To Earth

Perhaps the biggest problem with Gravity Heroes is that it just doesn’t scale very well between a single player and multiplayer experience. As a multiplayer campaign, there are extra gameplay features that enable defeated players to act as “ghosts”. In this form they can stun enemies and collect energy from the defeated in order to revive themselves, as long another player remains alive. Using this, you can largely keep your party in the game indefinitely with ease.

The single player experience is a different story all together. No element of the game changes based on the amount of players. As a result, playing the game solo is frustratingly difficult. Without being able to continually revive yourself, there’s a huge discrepancy in the challenge. Likewise, as virtually every enemy can soak up a fair bit of damage, it’s probably more punishing than rewarding to be shooting solo.

There’s a small escalation of difficulty as the game progresses, but it seems the only thing really standing in your way is having no friends to play with. Additionally, there are some nice little deviations from the usual gameplay, such as puzzles and screen scrolling levels, as well as a barebones narrative about a space robot uprising. Unfortunately, there just isn’t enough to bring the experience away from the numerous overshadowing flaws, into any sort of meaningful appreciation. 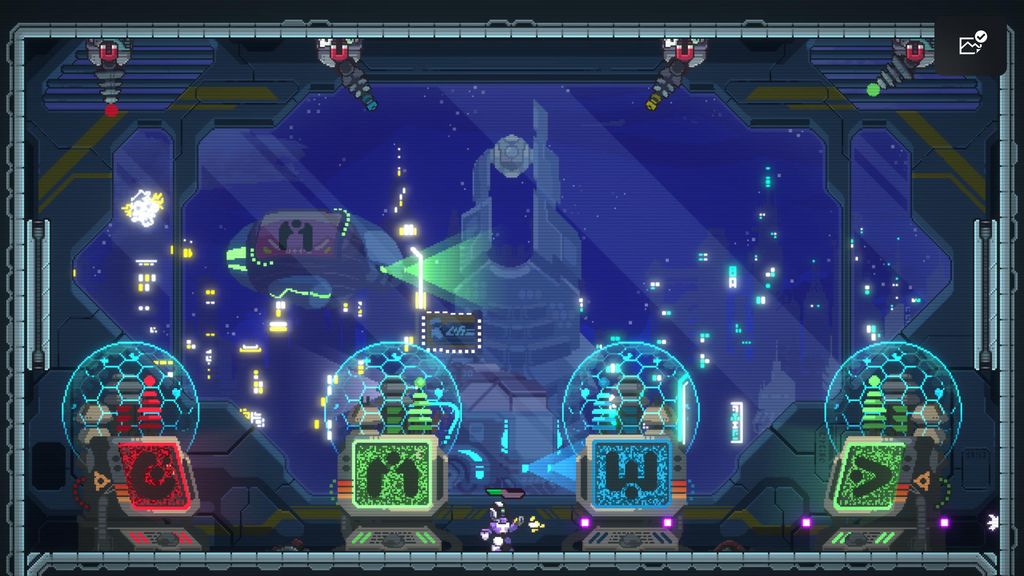 A Few Great Moments Overshadowed By Many Flaws

Gravity Heroes isn’t without its moments, such as its boss fights, but the general levels are just not particularly fun. Worse still is that the game doesn’t work very well as a single player experience, and with no online play, accessibility of the full co-op experience is very limited.

If you live with other people, you might have something here to keep your party entertained for a short while, but anyone looking for something to occupy their personal time should probably look elsewhere.

While charming in places, and with some fun gravity bending mechanics to stroke your novelty seeking, Gravity Heroes isn't all it could be. With a single player campaign that's barely playable, and too many tedious levels, this retro shooter leaves a lot to be desired. In the finer moments of Gravity Heroes, it can be a fun co-op experience, but without online play it is difficult to recommend this game for any single gamer.