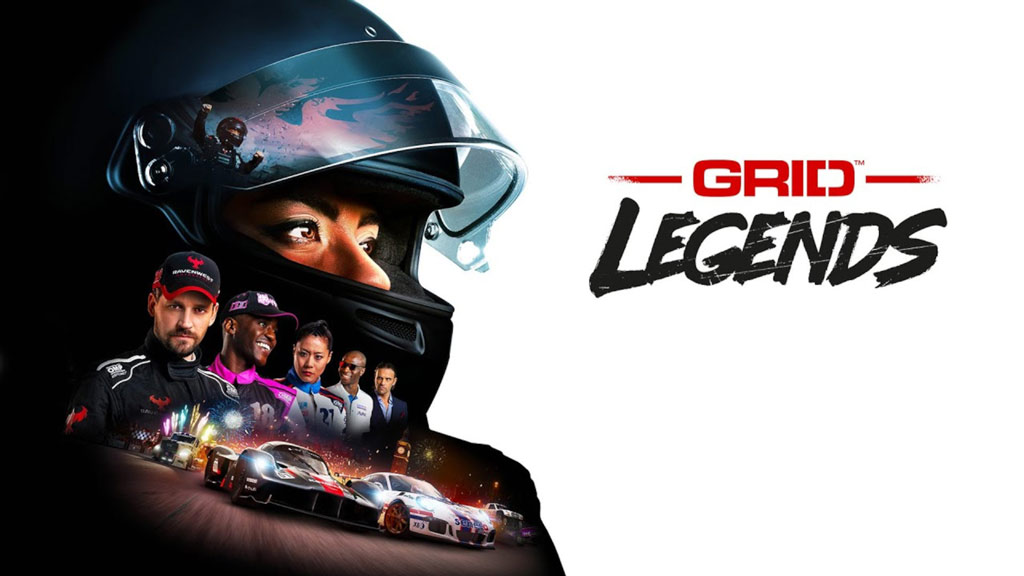 GRID Legends PS4 Review Adding a story to a racing game is akin to inviting Jacob Rees-Mogg to a birthday party. It’s entirely unnecessary, it creates a fetid atmosphere and it will really upset the children. So why Codemasters have returned to crowbarring a narrative into their technically impressive arcade racing simulations is either a vain attempt to attract non purists to the genre or perhaps the developers are trying to the stem the boredom of churning out another update by delving into low-rent drama. FMV and real ‘acting’ has been employed for this particular instalment and it doesn’t bode well for GRID Legends: The Movie, despite the eccentric casting of Tom Hanks as the ghost of Max Hastings.

Further On Down the Road

Taking the solid but uninspired GRID (2019) as a base for many of the cars, locations and career modes, Codemasters have dipped into their long dynasty of TOCA / GRID games and fished out the story mode from TOCA: Race Driver (2002) to bolster the faceless but varied racing. ‘Driven to Glory’ tells the story of you (“Driver 22”) struggling against the established drivers and teams, and pantomime villain racers who would gladly use your whipped hiney to shine their bristling libidos. Set across 36 chapters, you are plopped into a full gamut of cars and scenarios during the story and if for nothing else, this serves as ideal training before you access your “career” on the main menu.

You can thankfully skip the cut scenes and jump into the next short and sweet scenario with a specific objective which must be met before you can move onto the next chapter. Naturally the difficulty ramps up as your team Seneca progresses in the championships and as a sizeable challenge with a racing focus, it’s worth your time before you ‘go it alone’ in the career mode. The entire story mode can be skipped if you wish, but you’ll not only miss out on some occasionally gripping challenges, but also a raft of trophies tied to the story. 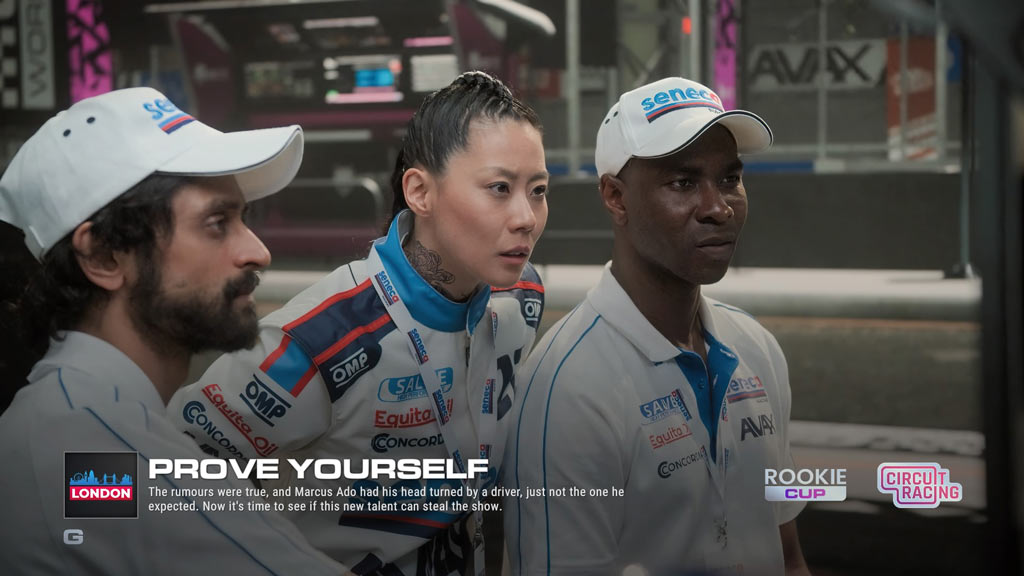 ‘Career’ involves selecting one of the car classes in each of the four difficulty tiers and then meeting all the required objectives to unlock the next batch of races. No cut scenes or story here – just run of the mill box ticking and the long slow accumulation of credits used to upgrade your cars, team mate’s abilities and your mechanic. The team and mechanic upgrades are a fairly pointless inclusion as they have a minimal effect on how capable your team mate is of helping during the race or just adjust multipliers linked to earnings from sponsors who set goals before each race. Additional detail yes, but in the end I felt all of this window dressing was inconsequential. Therefore Career is pretty much the same as the previous GRID game and although perfectly serviceable as a generic structure for a racing game, it feels somewhat staid and old fashioned in the age of Forza Horizon 5.

Of the wide variety of car classes available in career, the spring-loaded Stock Cars and the frighteningly quick Electric Racing Cars are the most refreshing and rewarding. Both offer vastly different handling, but they are responsive in their own way once you have nailed the requisite ‘feel’ for how they turn into a corner and when to brake. There’s a good consistency to the arcade-simulation handling which makes the game extremely accessible to less hardcore racers. Conversely, a huge challenge can be self-dealt after a trip to the ‘Difficulty’ options page but even at the most tricky setting, the cars remain responsive and driveable firmly establishing the arcade credentials. 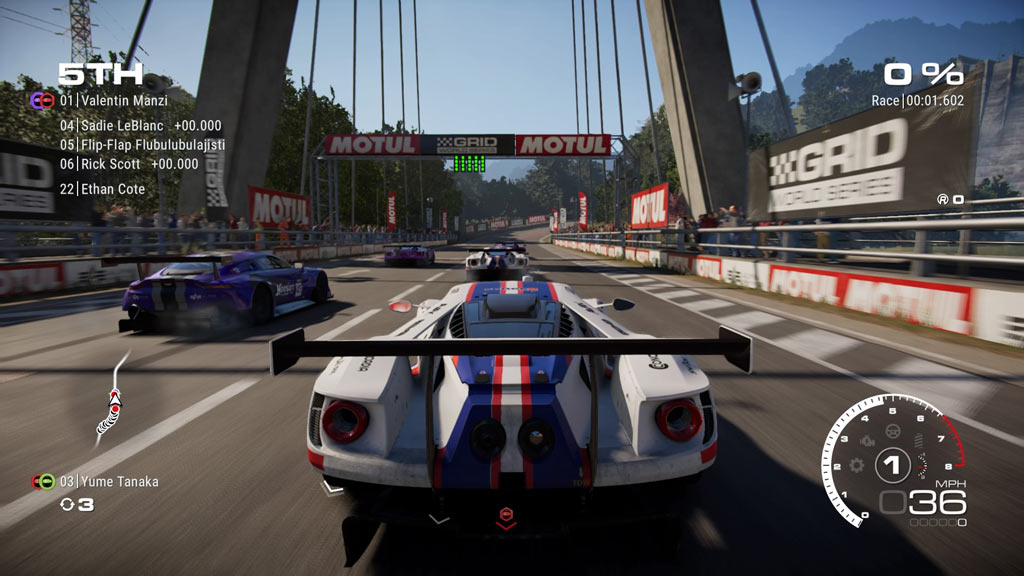 Girth of a Legend

In all there are over 100 cars available amongst the nine categories of Touring Cars, Trucks, Stock Cars, E-Cars, Tuner, GT, Track Day, Open Wheel and Drift. Along with the modern souped-up road cars and pro racers, there are a satisfying number of all time classics such as the Mini Miglia, Ferrari 365 GTB4, Datsun 240Z, Lancia Stratos and the Ford GT40.

Normal circuit races consist of a grid of 22 cars with yourself placed randomly amongst the pack from the off. Alongside these are events such as the standard Time Trial (post the fastest time across a number of laps), the gripping Eliminator (the tail end of the pack is eliminated when the timer hits zero) and Drifting (post the highest score of chained tricks during the event). Drifting is far more difficult to attain first place compared to straight racing, and soon becomes something of an annoyance as you have to retry for the umpteenth time to attain the required score.

GRID Legends adds two new locations to those in GRID – London and Strada Alpina, both welcome and brilliantly rendered additions adding superb twisting racing circuits to the twenty previous locations carried over from last time. An astonishing 130 tracks are derived from these locations which include San Francisco, Barcelona, Shanghai, Paris, Indianapolis and the inadvertently controversial Moscow circuits. 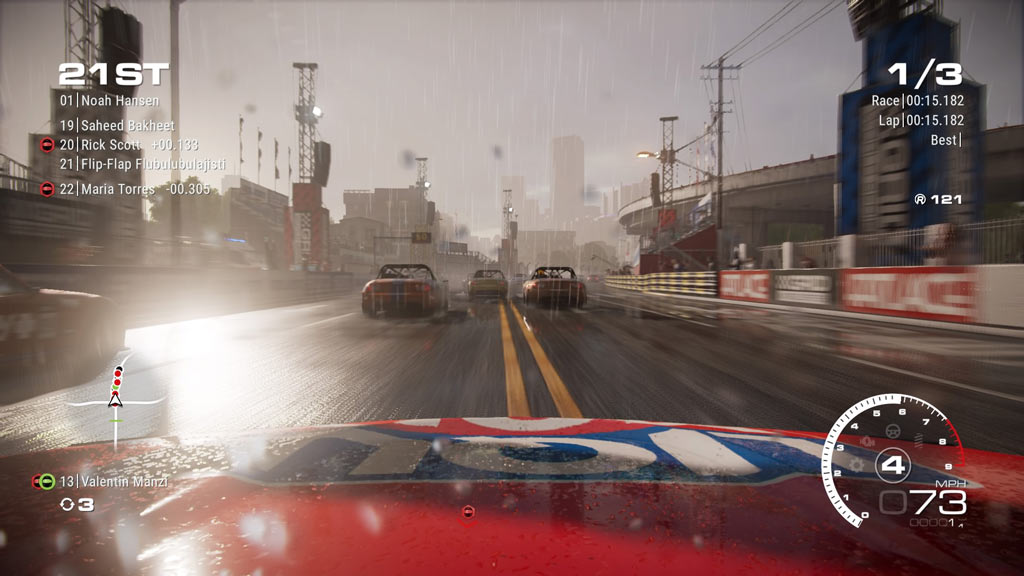 The ‘Nemesis’ feature returns, where AI cars turn against you usually following a collision but occasionally even if you just sweep past them or put their hair out of place. Once you’ve ruffled their feathers, they’ll aggressively block and ram you making overtaking far more difficult. It’s a pretty cool feature and it adds to an already solid AI who all seem unwilling to make space for you to overtake easily.

The other drivers are also prone to mistakes and as a result the rate of attrition is quite high, although their mistakes usually only involve a spin which puts them to the back of the pack rather than a violent smash into a wall. It’s a satisfying feature which heightens the sense of realism, making you feel as you’re not the only one who takes their eye off the ball sometimes. The only issue which needs work for future editions of GRID is a more pronounced effect during wet races, and removing the inexplicable accidents which occur up ahead to a top driver who doesn’t appear to have done anything to cause you to sweep past into the lead. Which was a fairly regular occurrence.

The AI attrition also highlighted the lack of terminal damage suffered by you and your rivals, even with Full Damage turned on in the options. Sure you can dent the hell out of your car by constantly rear-ending the pack as you conveniently avoid the brakes in order to shunt them out of the way, but the game was far too lenient in punishing ‘bullying’ tactics, particularly compared to the similarly themed Project Cars 2 which felt more realistic with car damage while allowing an arcade feel with the right options selected. GRID Legends removes a few credits for ‘repairs’, but it’s all superficial and this ironically creates a huge dent in enjoyment. 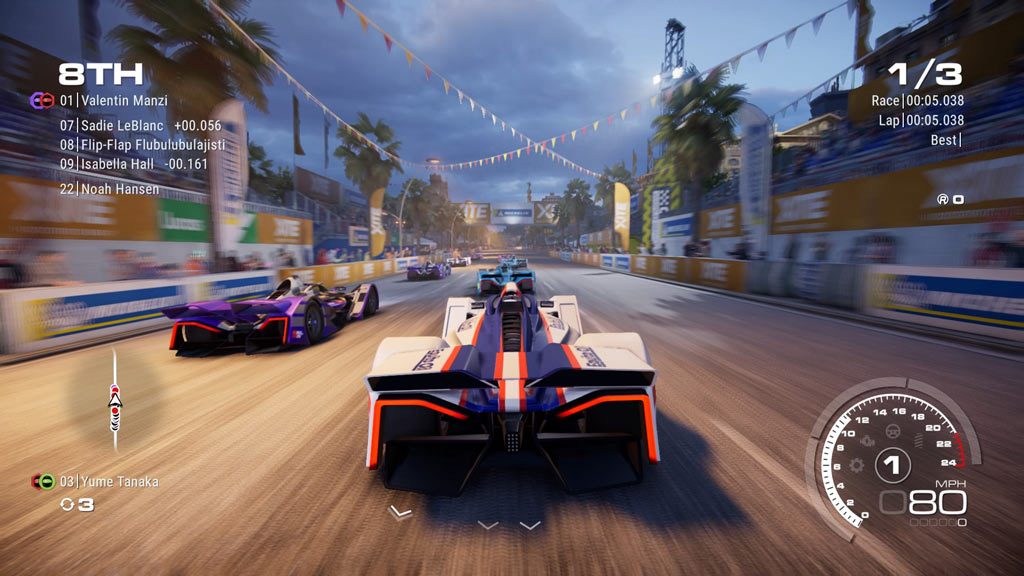 So there’s an enormous amount of content sitting here for those gamers who want a fresh challenge away from the photorealistic but sterile experience of Gran Turismo 7 which is due out just a week after GRID Legends. Once the huge single player experience has been conquered (or abandoned), online racing awaits with up to 22 cars on each circuit and all cars available on loan (at a price) for players who have yet to unlock them. Spaces on the grid can be filled with AI players too, so even if you’re primarily battling with a few friends or enemies, it can still feel like a proper race.

It has to be said that the visuals are impeccable with solid frame rates of 30fps and 60fps on PS4 and PS5 respectively, gorgeous lighting and weather effects, zero pop-up and a really convincing sense of speed. Likewise, Codemasters have gone to town on the engine and gear changing sounds which are some of the best I’ve ever heard in a racing game. Turn it up loud, and combine it with the phenomenal visuals and you have a truly immersive experience.

So with all this content pumping out from the exhaust, why does it feel like such an underwhelming and uninspired experience? It’s a definite improvement over GRID with a fair bit of additional content and refined visuals and audio. But there’s nothing here which hasn’t been done before and as a result it all feels a bit pointless, much like the tragically dull Project Cars 3, another franchise which has undergone a lobotomy in an attempt to achieve mainstream appeal.

GRID Legends is available now on PS4 and PS5

Faultless presentation, an absolute raft of superb vehicles across 9 categories, 130 brilliantly rendered circuits in 22 international locations and a 6 hour story mode alongside a huge career and promising online play. But there's nothing here that hasn't been done before and there's a soulless tedium involved as a result which begs the question - why?