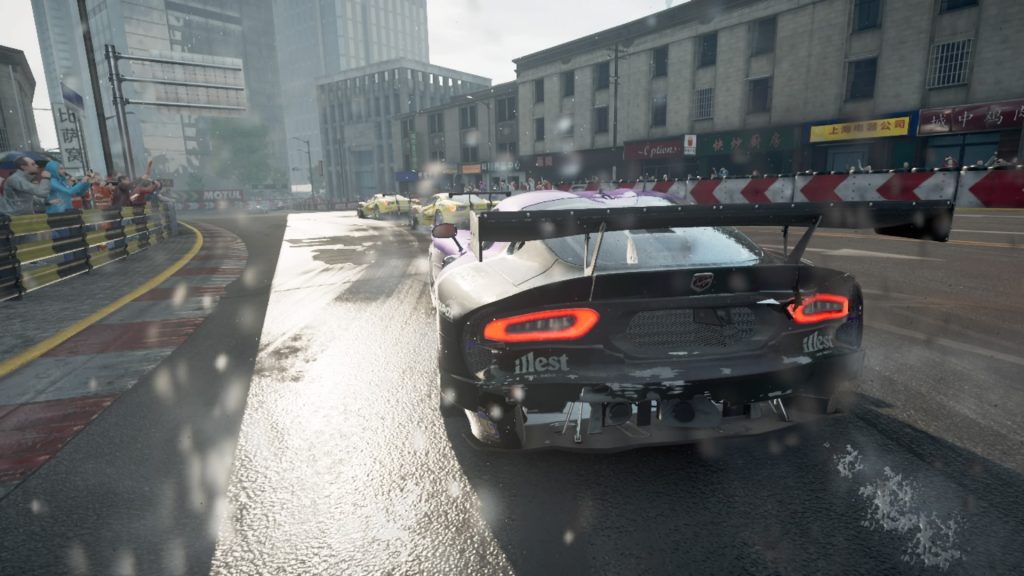 When it comes to racing games, Codemasters know their onions. A veritable swathe of polished and deep racing games have been born from their Warwicksire HQ for over 20 years, with franchises improving and growing each year. The arrival of the first GRID game for the latest generation of consoles is an exciting proposition for racing fans, particularly as the previous GRID releases on the last generation are all of considerable merit. But how does the format stand up against the competition?

On booting up, you are greeted with a grid (get it?) of 91 races across 6 multiple racing championships which you can dip in and out of to accumulate credits to buy new cars, and to unlock the final showdown which eventually gives you access to the big cheese ‘GRID World Series’. There’s a LOT of racing here.

Career-wise, there are six different championship classes.The Touring Cars series (souped up saloon cars) continues the brilliant series started back in 1997 with TOCA Touring Car Championship on PSOne. It also includes the rather lumpen Australian touring cars and circuits.Stock Cars (souped up American saloon cars) transfers the four wheel action into North America with higher powered but very heavy vehicles. Like NASCAR without the dizziness of the ovals. ‘Trucks’ or flatbed 4x4s also feature in the championship to mix things up a bit.

Meanwhile, Tuner (souped up Japanese road cars) mirrors the first two series, set primarily in Japan. Gran Turismo without the grinding. The GT series offers up a selection of souped up sports cars found on the likes of the Le Mans 24 hour race across an international track selection. With Fernando Alonso on-board as a consultant, his team FA Racing is a brand new racing class in itself, which leads to an opportunity to race against the man himself.

The Open Wheel F1000 series within sits between karts and F1 and is an exhilarating low to the ground, high speed racing car series. Along with the single seater open wheelers, there is a smattering of GT and Tourers on the way to the showdown with the testy Spaniard. Finally, the Invitational series provides a nice selection of classic cars including racing Minis, Ford GT40s, Ferraris, Porsches, Volvo estates (!) and Ford Sierras. When it comes to the number of vehicles, Compared to Gran Turismo Sport and Project Cars 2, GRID’s 60 cars available at launch is fairly minimal but no doubt this will increase with future DLCs.

If you’ve not played any of the GRID games on PS3, getting stuck in to the first batch of races reveals a solid arcade racer, dressed up as a simulation. Project Gotham 4 is the closest comparison, or some sort of love child of Project Cars 2 and Drive Club, complete with a kudos system for following the racing line, drafting, drifts and numerous other skills. Codemasters claim the balance is 80% sim and 20% arcade but they appear to have the numbers the wrong way around.

The kudos system is a keen indicator that GRID has been directed ever more towards arcade racing fans, and the change of direction is reinforced by the damage system.

Even on the most harsh setting, there’s very little realism in the damage meted out to your car for full-on collisions with other vehicles. This means that you’re free to bully your way to the front of a gaggle of opponents simply by ramming into them which undermines the entire core of the gameplay. The only way to cause terminal damage is if you hit rocks or a wall, and even then there isn’t much in the way of consistency.

One of the key elements which has made the GRID series work so well up this point, has been the necessity to drive in a realistic manner for fear of causing yourself damage which may lose the race. The combination of the forgiving damage system and the Codies’ trademarked rewind system (press Y to correct a mistake up to five times during a race), means that you never feel like you’re on the edge of your seat.

GRID’s sole USP appears to be the ‘Nemesis’ feature – collide with another driver during a race event and your new nemesis will subsequently deliberately block or shove you but whilst remaining within the boundaries of realism. You can potentially create a whole field of nemeses if you can ram enough of the other drivers during a race, but by the next event in the tournament, they’ve forgotten about your naughtiness. Unfortunately, rather than instilling fear in you when you see your nemesis ahead of you on the track, it never takes much to get around them and the whole feature ends up feeling like a rather pointless addition.

The developers claim there are potentially 400 different AI characters to battle with, but aside from the ones that you’ve successfully riled, the standard A.I. is very passive to the point of only following the racing line and patiently queuing if you manage to block the track after a skid. In fact the ‘Nemesis’ aggression only highlights how lacking in character the A.I. drivers are.

Get on the right track, baby

Aside from the rather dull Sydney Motorsport Park circuit, GRID’s limited pre-DLC track selection is mostly a choice regurgitation of old GRID tracks. The street circuits of San Francisco, Barcelona and the new Havana track offer up some incredible high speed battles as you weave through the chicanes, narrowly missing walls and power sliding around cobbled bends. GRID’s finest fictional circuit Okutama returns with glorious new lighting and detail and will be gratefully received by previous players of the series as will Brands Hatch and Silverstone, both packed with unpredictable high-speed corners.

Shanghai, Sepang and Zhejiang feature throughout each car series and are brilliantly rendered, if a little bland. Indianapolis and Crescent Valley round out the selection, so overall just a smattering of what was on offer from previous GRID games, but presumably more are due in good time.

You’ll be pleased to hear that GRID looks absolutely staggering, even on a base PS4. Fans of the GRID series will be glad to know that the cockpit view presents you with an almost photo realistic version of the interior of the car, and for racing wheel owners, there is a vast array of supported devices.

As you’d expect from Codemasters, the weather effects are top drawer and the tracks and cars glisten convincingly during a downpour, with blinding reflections from the road as the sun peeks through the clouds. The visual feedback adds a whole lot to the experience, with camera shake subtly conveying the bumps as you fly over kerbs or graze the walls. The cars themselves look as good as you’ll get from this generation of consoles from whatever angle you choose to race from. The race replays merely reinforce the glory of how this game looks.

The tracks are teeming with details, with convincing spectators (who react if you crash near them!) and off-track details like funfairs, helicopters and balloons all add to the sense of occasion.

Further on down the road

As with most modern racing games, GRID has a meaty career and an online multiplayer, which will provide all the spills and thrills you need whilst listening to a 12 year old gloating at you down the headset. The multiplayer enables you to add to your career credits to spend on new vehicles, and can host up to 16 players.

Strangely, the option to hire and fire your team mate in the single player career mode is hidden away in the options screen. More skilled team-mates can be unlocked as your career progresses, and you can ditch your current colleague when you have riled them into a nemesis… The team mate is a fairly inconsequential part of progressing through the career though, so perhaps that’s why the developer plopped it ‘around the back’.

So what we have here is a supremely polished and playable arcade racer with a large swathe of racing challenges stretched thinly over a scant array of tracks and a nice selection of perfectly rendered cars. Ignoring the pointless Nemesis feature, the main problem is the fact that the cars are practically impossible to damage, and therefore the game doesn’t penalise you for ramming your way to the front at every opportunity. Take away the risk and you’ve taken away the excitement.

It’s a great shame that Codemasters have failed to innovate the GRID series too. There is significantly less content than the 2014 PS3 release GRID: Autosport, and in the five years between the two games, the only idea that someone in the office had was to stick a red triangle over the cars you’ve been rear-ending and call them your nemeses.

No doubt the content will grow as the DLC comes out, but unless the damage system is patched, there’s not a great deal of challenge here other than trying to stay awake through the single-player career.

With absolutely nothing new to bring to the table except the pointless 'Nemesis' feature, GRID treads water in spectacular fashion. It looks and sounds amazing, and plays like an arcade game which has aspirations to be a simulator, but with no realistic car damage to penalise reckless driving, it becomes a long drawn out affair.