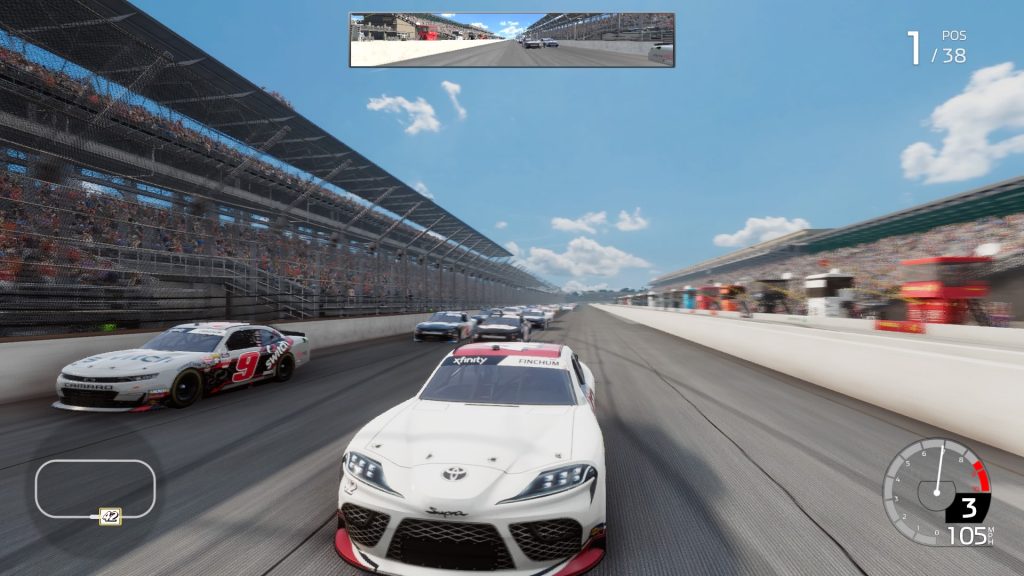 As a PS4 reviewer, it’s not often than one gets to review a brand new PS3 racing game, particularly one which rarely requires your thumb to move to the right (which is always troublesome). So, get your spittoon in position, and settle down for a retro race-fest of moronic proportions…

NASCAR (National Association for Stock Car Auto Racing) used to be one of the most popular motorsports in the U.S. and involves up to 40 supercharged cars driving around an oval circuit for between 90 minutes and 4 hours. Recently, its popularity in the U.S. has dwindled significantly, while the sport’s appeal in the rest of the world is minimal to say the least. Nevertheless, the latest NASCAR Heat game has received an international release which suggests either wild optimism on the part of the publisher, or a hitherto unexpected popularity outside of the sport’s homeland.

From a European perspective, it’s difficult to see the appeal of NASCAR’s oval circuit racing beyond the sheer quantity of vehicles on track. Sure, there are some exciting pile-ups to ogle and the cars’ average 180mph during the events, but it’s hard not to see the sport as anything other than a moronic exhibition of muscle-flexing noise, with little in the way of nuance or subtlety.

Despite all this, a fourth NASCAR Heat release was presumably bankrolled due to the popularity of the previous three games and initially, it appears to be a slick operator. The front end offers numerous racing options – aside from the career, single race and multiplayer options, the Challenge mode manages to be the most original and interesting concept here, but more on that later.

On initiation of the career mode, there is an enjoyable character editor which allows the player to create a hilarious monstrosity with which to compete in the four different race tiers. The first, Xtreme Dirt Tour, involves driving some fairly lumpen and unattractive cars around mud ovals as a driver for hire. Soon you receive offers to join a team or you can start your own, the latter of which enables you to hire team members to focus on aerodynamics, engine development and suspension.

Prior to each race, you can ready your car to the best of your team members’ ability before you head off for one of the ovals. Practice and qualification precede the race itself, with a slew of options and sliders so you can modify the race length and difficulty of the AI.

Once the race kicks off, it’s impressive to see yourself surrounded by 23 other cars (or 39 other cars on the top Monster Energy series) but unfortunately there’s not much else to be impressed with. True to life, the circuits are ovals set within a large stadium (and no doubt authentic) but once you’ve turned left constantly for umpteen laps on one circuit, there’s precious little variety during the rest of the season. The non-oval circuits are a welcome relief, but all they do is highlight how simplistic and uninspiring handling is when you have to turn right occasionally. Really, TOCA on PS1 was better than this.

The car handling is functional in an arcade-style, and the sense of speed with the bonnet cam is fairly convincing but there’s a pervasive feeling that you’re playing a PS3 game. It looks dated, and the license holders for NASCAR are presumably shooting fish in a barrel with regards to the lack of quality control on display. The developers must assume that NASCAR fans won’t notice that the game looks and plays like a throwback from 2006 as long as the licensed drivers and teams are up to date.

One of the most exciting aspects of NASCAR is the potential for high speed pile-ups. Monster Games has unfortunately missed a trick to include some flying bodywork by providing a damage model which is entirely unsatisfactory. Perhaps the dire gameplay and graphics could be forgiven if you could entertain yourself by jousting 39 opponents into oblivion, but you merely grind to a halt with a dented bonnet during a collision with the entire pack.

Unless you’re a born and bred NASCAR fanatic, steer well clear of this dated and lumpen arcade-sim. On the plus side, the multiplayer offers up to 40 racers, and the challenges bring some interesting bite-sized scenarios for you to complete and running your own team feels fun in the short term. That is until you realise how simplistic the management aspects are. If the developer continues to tread water for NASCAR Heat 5, it proves that a popular license supersedes any need for quality.

If you want to race on ovals with some thrilling and destructive gameplay, check out Wreckfest.

NASCAR Heat 4 was developed by Monster Games and published by 704Games and is available for PS4 and Xbox One right now.

A dated and niche license receives the game that it deserves - shallow, simplistic and unsatisfying. Turn left before you get to the checkout.