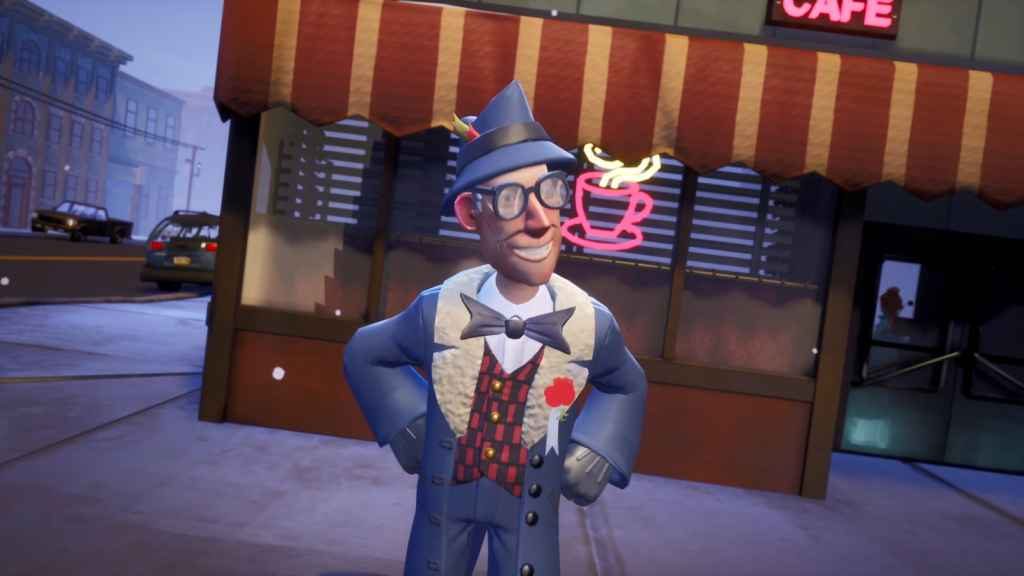 In the 1993 comedy classic film Groundhog Day, obnoxious weatherman Phil Connors (Bill Murray) finds himself trapped in a time loop, forced to live the same day over and over again. Over years and years of repeating the same day, Connors eventually becomes something of a savior figure, learning everything there is to learn about life, becoming wise and sage-like.

But before he achieves enlightenment, Connors rages against the repeating day he finds himself stuck in. He feels trapped, indeed he is trapped, and the only way out of the loop is to master so many activities and vocations that his mind eventually opens to the secrets of the universe.

Groundhog Day: Like Father Like Son follows the misadventures of Phil’s disaffected son Phil Jr., as he becomes similarly caught up in a mystical time loop. And while playing Groundhog Day on PSVR never quite taught me the mysteries of the cosmos, I certainly did feel the rage at being trapped.

The writing in Like Father Like Son is actually superb. Some of the best I’ve encountered in gaming, actually. The surprisingly adult dialogue crackles with wit, taking unexpected twists and turns as the story unfolds.

Phil Jr. has arrived back in his hometown of Punxsutawney to attend a celebration in honor of his late father. Phil Sr. was something of a folk hero in the town before he passed. It seems that after he escaped from his time loop, he stayed in the town, having learned everything about everybody that live there – engaging in acts of charity and goodwill for the rest of his life.

Unfortunately, his good nature was lost on his son, who spent his youth feeling overshadowed by his spectacular father. Now an embittered and rather shitty young adult, Phil Jr. seems dead set on ruining the statue dedication ceremony he has come to attend. And during his first journey through the day, he does just that, making obnoxious comments to his family and generally mocking the entire town for daring to appreciate his father.

But then Phil Jr. wakes up to experience the exact same day again. And again. And again. And before long, Phil Jr. starts to realize that the only way to help himself is to help other people. Keep his niece from driving his brother’s car through a wall. Prevent his ex-girlfriend’s kid from getting arrested. Learn to fix a cappuccino machine, so his brother doesn’t suffer a complete meltdown at the diner later in the day.

All of this is very engaging, and the story part of Groundhog Day is a total win. Each day plays out via a number of scenes, vignettes which can be repeated as often as desired. The scenes wrap around themselves, and things that you learn in scenes that take place later in the day will come into play in earlier scenes when you take your next trip through the day. And just because you feel like you have “solved” a scene doesn’t mean that you won’t need to come back later to figure something else out. The cycle is fun and engaging.

The adventure parts of Groundhog Day are very clever, and very well constructed. Solve a puzzle once, and the game allows you to skip past it the next time, preventing the feeling of busywork. And as the game teaches you early on, if you are bored with repetition, you aren’t paying close enough attention to the variations.

Had the developers at Tequila Works simply stuck with a Telltale-like adventure title, they would have had something close to a masterpiece here. But unfortunately, there are other gameplay elements that come into play, threatening to completely undo all of the goodwill that the quality writing and performances have earned.

Is that subject heading a little harsh for a game that I seem to have enjoyed? Maybe, but for a game that is teaching lessons about patience in life and learning to appreciate details, Groundhog Day gets so bogged down in details that my patience pretty much exploded.

“Solving” a scene can be done in one of two ways: Either you are asked to figure out a puzzle (fun and satisfying), or you are asked to solve a minigame (utterly broken and infuriating). Here’s the thing: for all of its great writing and intricate plotting, Groundhog Day just doesn’t work all that well on a technical level. Weird little glitchy things keep happening at precisely the wrong moment to ruin the experience.

For example: It wouldn’t be a problem that the world shifts and heaves around the player for no reason; that dynamic is a bit of a VR standard. However, when the player is being asked in a minigame to precisely spray paint a wall in ridiculous detail, it pretty much breaks the game. Being asked to color ‘in the lines’ wouldn’t be an issue if the damn wall would stand still (and if the spray can wouldn’t randomly jerk to the right on occasion, spraying a swath across your carefully constructed work).

By the time you finally get through this little project (and it can take up to a half hour), you’ve committed so many errors that – like Phil Jr. – you must start over again. And again. And again. This falls well in line with the theme of the game – but is frankly a terrible player experience.

Or there’s the part where you have to learn a dance in the diner from film-favorite character Ned Ryerson. The player is asked to follow what Ned does with the Move Controllers – much like a PS3-era dance game.

The problem? There is a glitch in Groundhog Day that causes your hands to float away across the room if you reach too far outside of an arbitrary invisible bubble. Not a problem when solving a puzzle – I solved most of them one-handed with my other hand twitching in the distance. But dancing with Ned makes your hand float away – causing you to fail the overly long trial – because, you know, the game is tracking your hands. Rage.

There’s the statue carving that glitches out, causing you to knock a vital piece of granite out of place – a hand, perhaps. Or maybe you accidentally leave the minigame – when you were merely attempting to change position – because the tracking has gone awry, forcing you to start over.

There is a chance that these minigames glitch out on purpose – essentially forcing failure to demonstrate Phil Jr.’s capacity to learn and improve. If this is the case, I strongly dislike this design decision. Masking gameplay as a bug just serves to make the player feel like they are playing a buggy game – regardless of the themes or intentions of the developers.

There are even instances where I went to grab one of the dialogue options during a conversation, only to have the game register the wrong one. This sends the player either in a story direction they did not want to go, or down a repeating path with dialogue they have already seen and resolved.

For every fun and satisfying piece of Groundhog Day, there is one that breaks your patience through forced repetition due to glitches – wildly ironic considering what this game is all about.

Is The Story Worth The Hassle?

I do think that Groundhog Day: Like Father Like Son is worth playing. The story and construction are fun and original, and we simply don’t see many games that are as bonkers-out-of-the-blue as this one. It is my hope that Tequila Works patches some of these minigame issues up, because the stuff that works here really works. The writing and structure of the adventure portion of the game are worth the price of admission.

I can’t help but feel that this game would have benefited from a few more months in the oven. Its a shame that a game this clever and original suffers from these issues, and most casual players will probably want to wait for a patch. But if you do take on Groundhog Day at launch, be ready to feel some déjà vu, because you will be playing some of these minigames again and again. And unlike Phil Connors, you won’t be learning anything from the experience except how to get angry.

Groundhog Day: Like Father Like Son is primarily a superb adventure game occasionally stymied by overly finicky – and at times outright broken – minigames. At most times a stellar lighthearted VR romp with some grand heartfelt moments, Groundhog Day's charm subsides at times as players are forced to do minigames over and over to succeed. The superior writing and structure shine through, but expect some moments of frustration.