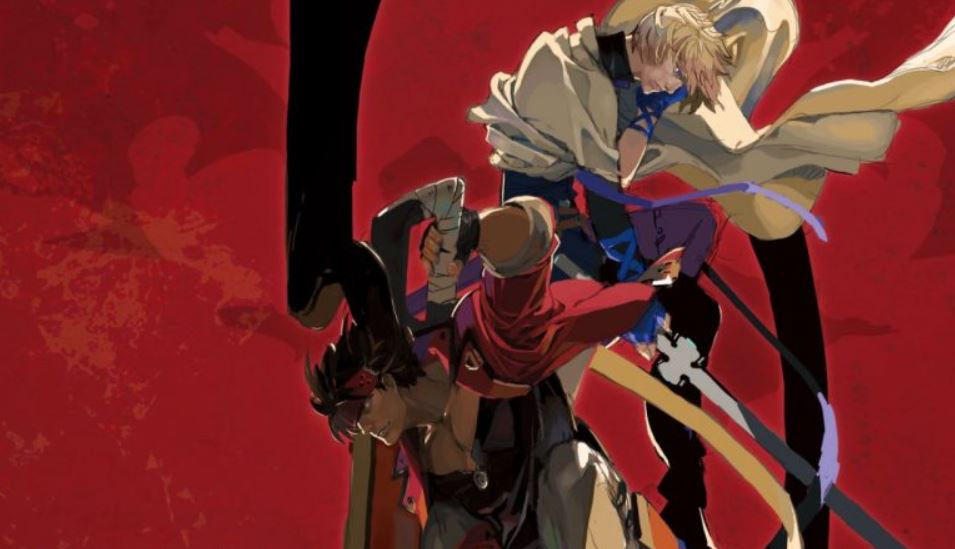 Guilty Gear Strive PS5 Review – Guilty Gear is back with an another exciting instalment of the popular competitive fighter series. Guilty Gear Strive is Arc System Works 7th main title in the franchise, and e-sport fans are no doubt very keen to see how the new anime brawler lives up to its name.

Strive certainly isn’t short on style. The delightful anime artistry, slick motion, and the feeling of power behind the attacks is superb. The mechanics have fined tuned to give a different feel than that of Guilty Gear Xrd, potentially opening up the franchise for new players, but without any compromise on depth for hardcore fans. Fighting fans are in for a real treat.

A Stunner In Every Aspect

Unquestionably, Guilty Gear Strive is a looker. The wonderful mix of cel-shaded manga models over a more traditionally rendered world is a delight. Arc System Works have once again managed to capture that low frame rate anime feel within a 60 FPS fighter, achieving both an authentic feel and fluid fighting. Gameplay somehow manages to transition from beautiful art to a brutal fighter instantaneously, on any given frame.

The screen can get a bit chaotic at times, with all the wonderful particle effects that erupt on hits, but it never amounts to any notable detriment to the gameplay. There always seems to be a good contrast between character’s energy, so you’re always aware if you’re the one being decimated or not. Everything in motion is a wonderfully crafted piece of art that should delight both participants and spectators. 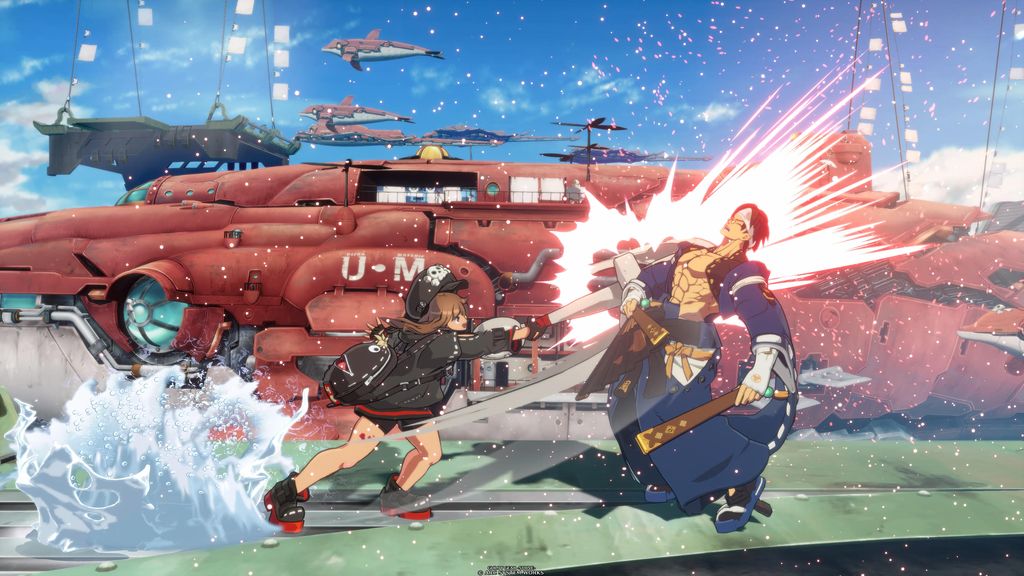 No Guilty Gear is complete without the signature adrenalizing soundtrack, and Strive is no exception. Courtesy of series developer and composer, Daisuke Ishiwatari, fans will have some excellent face melting metal to accompany their many battles. Moreover, it’s just ridiculously catchy at times. It’s near impossible to resist chanting the line “This Is Bullsh*t!” before the drop into the chorus of in-game song; “Smell of the Game”.

When it comes to the core gameplay, it’s abundantly clear that an impossible amount of thought went into the craft. For a series newcomer, or casual fighter fan, you can more or less jump into arcade mode and begin applying some universal fighting game tactics.

However, it won’t feel as free flowing as previous titles, and eventually you’ll be reckoned with properly learning the game. Here is where you’ll encounter the deep and intricate systems that make Guilty Gear Strive a fighter fans dream.

The Guilty Gear experience here has been somewhat streamlined to really bolster the importance of signature mechanics. Rather than emphasise hit combos, you’re encouraged to learn the various “cancels” that can string otherwise unchainable moves together. The system can be complex, but offers a tremendous amount of opportunity for creativity. 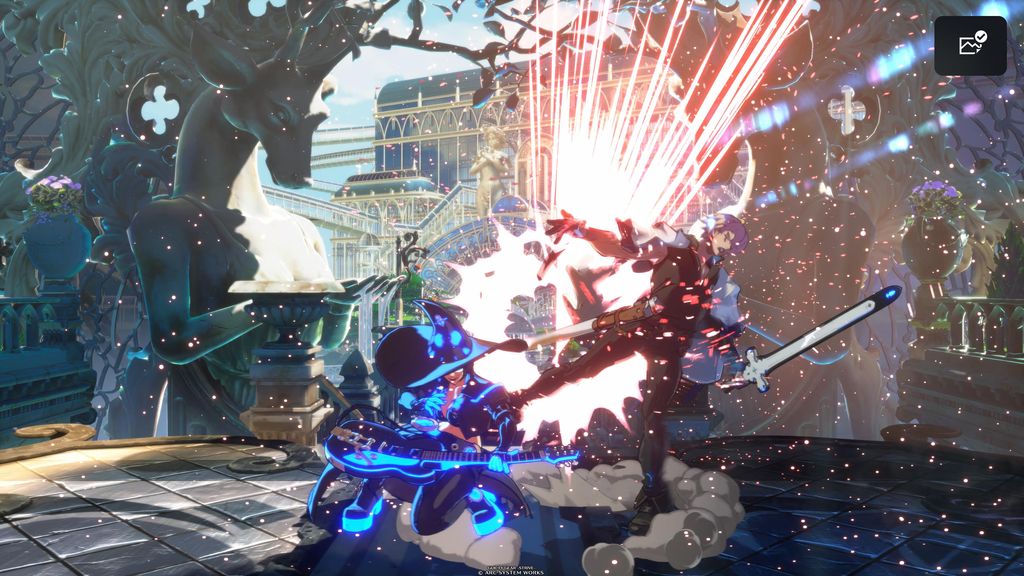 The major new mechanic that has been introduced is the Wall Break. Though it looks like just a cool effect, it essentially throws a lifeline to whichever fighter has inevitably been backed into a corner, by blasting through the stage and resetting the fight. It feels like a situation where everyone wins, since the defending player gets a chance to breathe, and the attacker gets a cool screen effect to reward their onslaught.

There are many layers of offence and defence that enrich the meta of combat, and it will surely make for an interesting spectacle at a professional level. Each character can apply these layers as universals, but to differing affects. Furthermore, each character has their own exceptional rules that make every fighter feel unique, and yet still function with similar principles.

Everyone has 2 gauges, a tension and a burst meter. With the former, Guilty Gear Strive encourages aggressive play. It fills as you simply move towards your opponent, but also with each hit, and enables an overdrive move for devastating effect.

The burst meter is to perform certain moves in the game that involve interrupting the enemy, and allowing a breather. It’s a great little mechanic that makes you always feels like you’re still in the fight. 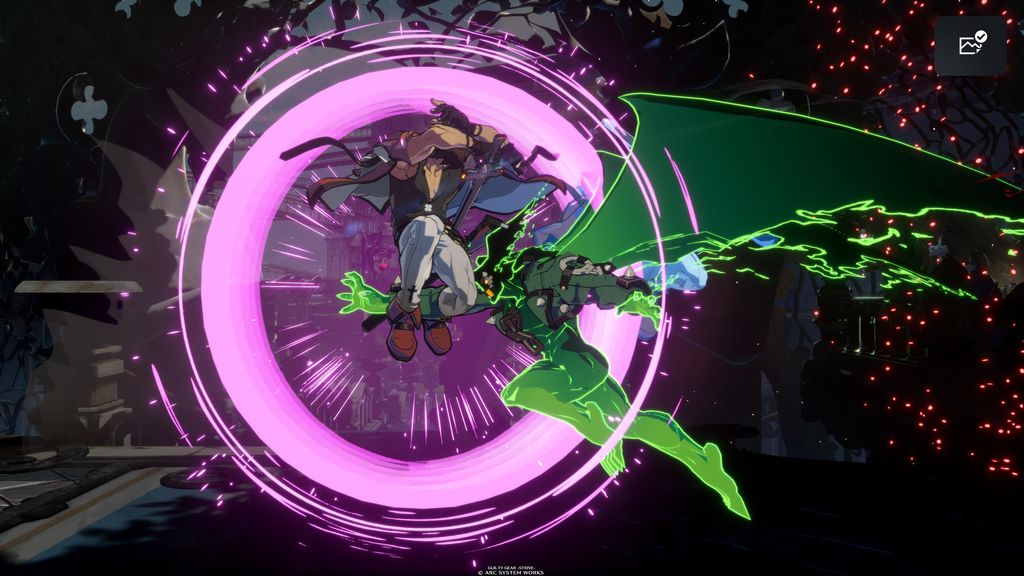 There are some characters with very distinctive mechanics, such as Nagoriyuki’s bloodsucking blade. These quirks offer a real variation of play, and an alternative style to try trump your opponents with. The overall variation in characters is entertaining, whether it’s the brutal power in Sol Badman’s heavy slashes or the overwhelming speed of Chipp Zanuff, there’s plenty of playstyles to match your personality.

There’s such an immense amount of depth in this game that would just be impossible to cover without this review turning into a guide. Incidentally, it’s also the reason that Guilty Gear remains very much a niche product. The action is slower, which allows some accessibility to newcomers, but also makes combat a bit more thoughtful and deliberate. However, learning the game is still very much a major investment of time. Fortunately, an extensive Mission Mode is available to train you through every nook and cranny of the combat.

A Bit More Fighting And A Little Less Writing

As of launch, Guilty Gear Strive feels a little light on content. 15 fighters isn’t the most generous offering, although there will certainly be extras added in DLC. There isn’t really much to explore for single player players either. You’re limited to Arcade mode, Survival mode, Mission mode, and a non-playable Story mode. 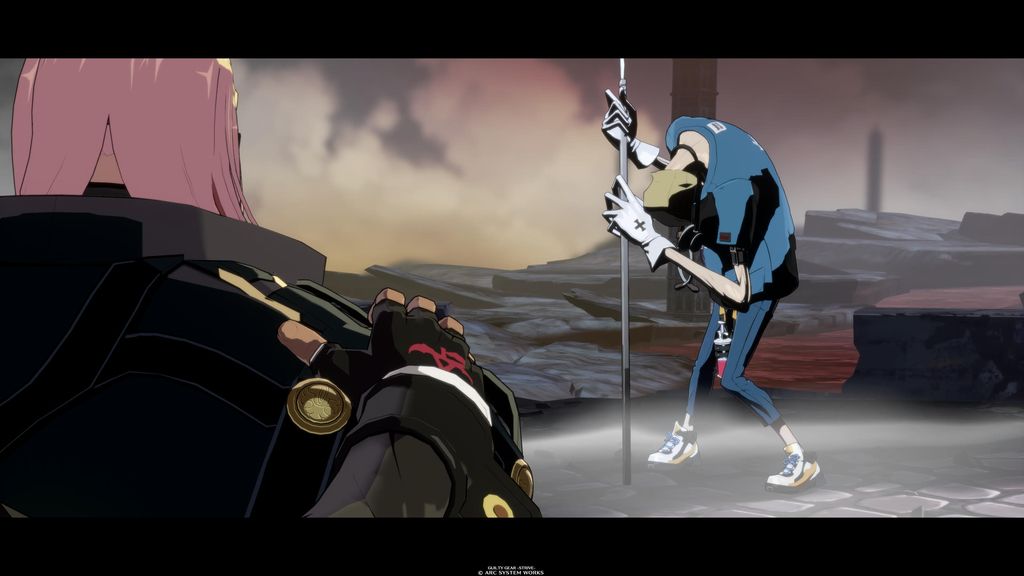 Arcade made is the classic fighting experience. It begins with an initial stage which serves to measure your ability. The difficulty of the following stages is then determined by how you perform in that fight. You get some unique interactions between the characters in those fights as well, which is a nice touch. Additionally that initial stage character might pop up again as an assisting fighter. The result is a chaotic melee, but a fun way to tackle a stubborn last stage.

Mission Mode, as previously mentioned, is a large and extensive, but serves mainly to train you in the game’s core principles. The endeavour of completing them isn’t itself fun, just necessary. There is also Survival mode, a fight ’til you drop series of 1 on 1’s, but probably won’t be the main draw of the players attention. That honour belongs to online mode.

Competitive online play is clearly what a game such as Guilty Gear Strive is all about. Although the servers were sometimes slow to connect, the responsiveness of battles is excellent. Players can test their mettle in a ranked system, and even watch replays of other matches. Watching high tier battles is an excellent way to nab some offensive ideas, and when the trophy for “begin assessment of target” pops, it’s clear this was Arc System’s intention for the Guilty Gear community. 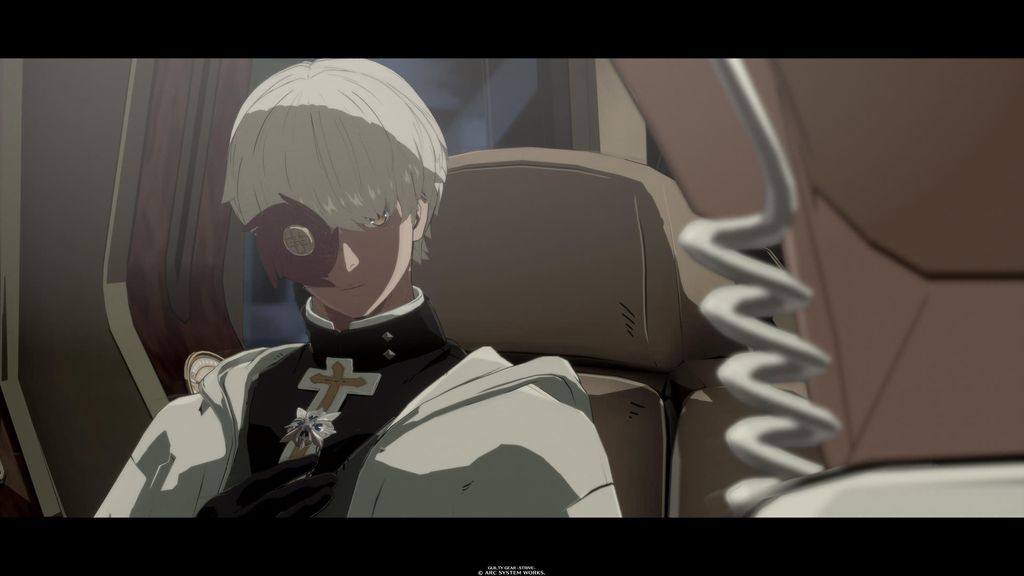 You have to appreciate the effort the developers have put into trying to enhance the online experience, but it must be said that perhaps the lobby isn’t exactly everyone’s cup of mocha. You create a pixel art avatar and then can roam inside of your ranked floor, interacting and fighting players through battle stations. While it definitely enhances the feeling of community, it feels slightly unnecessary.

Outside of all your superhuman battling escapades, there is a story mode that can be enjoyed. Fans very attached to the characters and lore of the series have something to dig into, and newcomers can now embrace the franchise’s story with an accompanying encyclopaedia.

It is surprisingly detailed, giving background on every character and a timeline of events. While the story definitely serves to drum up some intrigue, it probably isn’t the most memorable narrative you’ll ever see in an anime. Perhaps it also holds a glimpse of future characters yet to be released.

A Gorgeous and Intricate Fighter Just Shy Of A Complete Package

Undeniably Guilty Gear Strive is a near perfect fighting game for fighting fans. Arc Systems have done as much as possible to keep the gate open for newcomers, whilst maintaining a deep and intricate system for hardcore players to sink their teether into. It can’t be stressed enough how impressive everything seems to work in practice.

As well as being a great battle system, it is an aesthetic masterpiece full of dazzling effects, charming fighter models, and an addictive soundtrack to boot. You would be hard pressed to find a better looking fighter, although perhaps the hard-hitting music won’t be to everyone’s taste.

The only thing really going against it, without splitting hairs, is the limitation of the offering. An interactive story mode would have been appreciated, and certainly some more character options. However, with or without upcoming DLC, Guilty Gear Strive is a real masterclass in how to deliver an arcade fighting experience and it will very interesting to see how the title evolves into the future.

Guilty Gear Strive is a simply stunning anime fighter with an astonishing depth of competitive gameplay. It does all it can to welcome newcomers with an extensive training mode and streamlined fighting mechanics, but it is still very much the beloved Guilty Gear niche experience, and rightly so. You can't have too much of a good thing, and Guilty Gear is certainly a good thing, so it's a slight shame that there isn't more content to sink our teeth into. Nevertheless, as a competitive fighting experience, it is still a fantastic entry that fans of the series will adore.