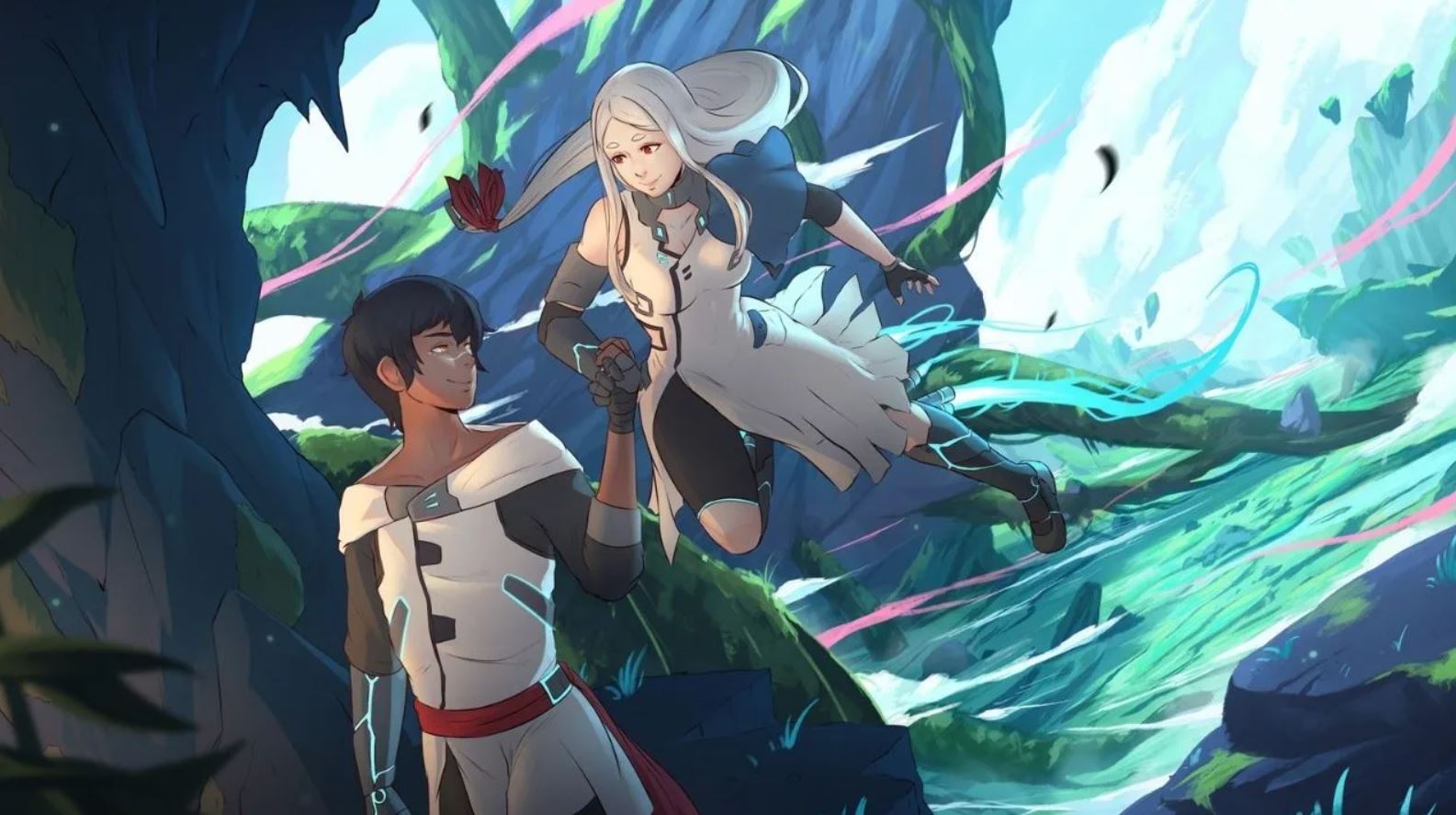 Haven PS5 Review – Haven is a game that I’ve been watching for quite some time, with the beautiful landscapes and premise of it quickly grabbing my interest. After a lengthy development cycle, I wondered how Haven would turn out after developer TheGameBakers‘ previous title, Furi. Haven is a completely different game with unique storytelling and a turn-based combat system with enough depth that kept me going for the game’s fairly lengthy campaign.

A Story Of Love And Hope

Haven tells Kay and Yu’s story as they live their life on a distant planet away from their home. A young couple so deeply in love, they ran away from home to be together. At first, you don’t really know why they ran from an entire planet, but that becomes evident throughout the game.

The world that Kay and Yu are from is a world where their rulers mandate everything. Particularly who your life companion will be. Kay and Yu are both matched with different people but refuse to accept the word of law and instead run away to be together. In doing so, they break one of the most sacred laws and are now being hunted for their transgressions.

Most of the game’s story will be presented in the Nest. The ship that the couple resides in. The narrative is all about Kay and Yu’s love and what they have to go through to prove their love for one another. You not only get to watch as they live their life, but you get to experience it. Kay and Yu go through simple worries like what they’ll eat or what they’ll do for entertainment.

It may sound boring to some, but it’s essential to know who these characters are and how they build up their relationship. For the most part, I was truly captivated by their relationship’s believability and how I got to see it grow. What’s better is I got to make some decisions on how to respond to specific situations. Though there is never a wrong answer, your relationship bond will increase depending on your answer and how Kay or Yu responds to your decisions.

This is just another example of learning who these characters are, along with their likes and dislikes. It’s almost like a real relationship; you have to get to know your significant other to connect to them truly.

There is a bigger, more overarching story in Haven, but talking more about it will spoil many of the bigger surprises in store, particularly about the planet “Source” Kay and Yu find themselves on. As you control most of Kay and Yu’s life, eating and sleeping are also up to you. As you explore Source, you must maintain Kay and Yu’s health. Resting after exploration is important as you see more scenes between the two and help build up your relationship bond.

Everything You Do Expands And Shapes Kay And Yu’s Relationship

The Relationship Bond is essentially your experience bar. Everything you do will increase the bond, from cooking, crafting, and combat. Most of the bond comes from the dialogue between Kay and Yu and the answers you provide for both characters. Once you reach the maximum bond level, you must go back to the Nest and have a celebratory drink. Once done, you’ll level up and increase your health along with various other stats such as stronger combo attacks.

Cooking and eating also keep your stamina up. Though there isn’t an actual stamina bar, if you don’t eat for a while, you notice that your attacks take longer to pull off during combat, which can lead to some perilous situations, especially later in the game.

The Nest provides plenty of other things for Kay and Yu to do. Crafting capsules to use during combat to heal yourselves or capsules that increase your speed for a short duration.

All of this can’t be done without the materials found on Source. The planet itself is a gorgeous landscape. Colorful and lush locales make it unique and a beautiful wonder to behold. Unfortunately, Source suffers from serious seismic activity. Massive landmasses are kept afloat by something called the Flow.

This mysterious energy is the lifeblood of the planet and how Kay and Yu transverse the land. Using unique gravity boots powered by Flow, they glide across the landscape, exploring their new home. Thankfully gliding itself is easy, and I never had any real issues.

Each landmass is full of wildlife, but none of them are really hostile, and all of them can be pet and scratched. In fact, one of them takes residence near the Nest and becomes a pet, which our couple name Oink.

Not everything is peaceful on Source. A mysterious substance is overtaking the lush landscapes called Rust. Besides finding food and plant life to harvest for cooking and synthesizing, you must remove the Rust to help the wildlife. As Rust takes over more and more of the land, the local wildlife becomes infected with it. Rust makes them more aggressive, which in turn forces the couple into unwanted encounters.

Thankfully, the rust can be cleared out using your gravity boots and the power of the Flow. As you clear out the Rust, you earn small Rust Crystals, which are used to craft boost and healing capsules. Rust is also essential to repair your ship, which gets damaged during an earthquake, as Rust is the only solid metal found on Source.

The only major problem I found is that there isn’t enough to do in the exploration department. Besides simply finding materials and clearing out Rust, it can get kind of stale, constantly doing the same thing over and over with no variety in how you do it.

Battles in Haven are simple, but boy can it become complicated and strategic. When entering combat against the various Rust infected wildlife, Kay and Yu use their gravity boots and flow embedded gloves. What makes combat so unique is how it actually works. Kay is controlled using the D-Pad, while Yu is controlled with the face buttons.

You take control of both characters simultaneously and have to select what actions each character takes. Both characters get four options: Impact (physical attack), Blast (long-range attack), Shield, and Pacify. Different wildlife will require different tactics. It’s not just whether an opponent is weak to Blast or Impact, but how the enemy actually fights.

The combat strategy really comes in halfway through the game when you begin to encounter enemies that counter-attack, knock you off your feet, seal you, or are only susceptible to damage after specific actions. With two characters, you have to trade off what each character does during combat, Block with one character, and counter-attack with the other when the enemy leaves itself open to attack.

You also can’t constantly block the entire fight as each successful block drains your shield Flow. Once your shield is depleted, you just become a human shield instead. Once you do enough damage to an enemy, you must Pacify them to clear them of the Rust affecting them. If you take too long to Pacify, the enemy will get back on their feet and regain some of their health.

You can also combine attacks of the same type to pull off powerful combo attacks, but it leaves you open for attack and takes a lot longer to charge up and pull off, which is another strategy to consider. Do you go all out with a combo move or take it slow and easy with strategic moves?

I should mention just how long it took me to get used to the combat and how it controls. Controlling two characters at the same time who have to work in sync to achieve the best results. Those who have trouble multitasking are definitely going to have a hard time.

My favorite part of Haven is the music. There hasn’t been a game in a long time that I played and just jammed out to its soundtrack. The electronic score defiantly deserves to win some musical awards. The voice acting is also impressive. Both actors pull off a great job and really bring Kay and Yu to life with their performance.

Haven is a great story of romance and what two people who truly love each other are willing to go through to stay together. Through all the trials and tribulations, I got to experience their journey, and for that, it was a truly great experience.

Haven has a great world that I hope is expanded on in future titles, and a combat system though difficult to get used to, really pays off at the end of the day. Though Haven is all about Kay and Yu’s story, the game’s soundtrack is what really steals the show. Overall Haven is a great game that could have used a few more activities to do outside of clearing Rust.

Haven is available now on PS5.

The Game Bakers have done a wonderful job creating a unique world and telling a love story that's believable and intriguing. I was fully invested in Kay and Yu and shaping their relationship. Though the game is all about the story, the game's turn-based combat is truly unique and demands your attention. What seals the deal is Havens's fantastic soundtrack providing some of the best electronic music I've heard in a while. For those looking for a different type of game, Haven is a great alternative for those looking for a great character-driven and emotional. experience.