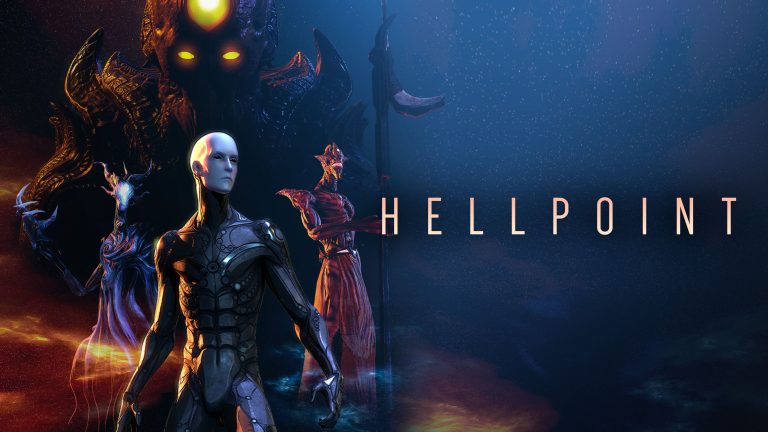 Hellpoint PS4 Review – It was Oscar Wilde that said; ” imitation is the severest form of flattery.” That quote has never been more relevant than in this review. Hellpoint, by Cradle Games, is the most Souls-like, non FromSoftware game I have ever played. For better or worse this title is a homage to the rightly dubbed ‘Soulsbourne’ genre of action RPGs. However, it does have slight differences in both its setting and its gameplay. Does it live up to its source of inspiration? Or does it fall flat trying to emulate one of the most popular series’ of games in recent years?

I do apologise in advance but it will be nigh on impossible to complete this review without mentioning Dark Souls. Hellpoint is so similar in most areas that it is impossible to do otherwise. I am a massive fan of the FromSoftware RPG’s and have played lots of other games of the same ilk from other developers. Games like The Surge, Lords of the Fallen, Nioh and even smaller titles like Salt and Sanctuary. Hellpoint is, as I stated earlier, the closest game, in terms of mechanics and gameplay to the Soulsborne titles I have played.

In Hellpoint you wake up in dark, dank room, in what only can be described as a Matrix-esque style awakening sequence. You are then left to spend the first hour or so roaming around, piecing together what is happening, and why you are doing what you are doing. You are on Irid Novo, a dark derelict space station littered with things that just want to maim and kill you.

The ‘Architect’ who is very ill awakens you, he needs you to gather data and uncover Irid Novo’s secrets. Through a set of voice recordings and terminal communications, you find out that you were born stronger than most and were awoken as a perfect specimen to gather the data required. While the story does not have the complexity and absurdity levels of Dark Souls and similar games. It was a bit on the bland side. The story was average and nothing spectacular.

The thing I love about these games is the awesome gameplay loop you are presented with. You get from point A to point B, exploring and killing enemies with a limited amount of health and consumables. Every death is a learning experience and even the lowest level enemies can kill you if you are not paying attention. You know those small thugs in every game that are nothing to worry about, not in these games, every enemy requires your attention, get greedy or take your eye off the ball and you will die.

Hellpoint works in similar ways. You drop all of your XP currency on the spot (Axioms) when you die. If you get back and re-collect your Axioms before dying a second time then nothing is lost. Otherwise, your collected XP will be gone forever. It is a very rewarding system that always keeps you on your toes, you are always looking for the next time you can cash in your Axioms and level up your character’s stats.

Breaches are the things you are looking for in Hellpoint but again, they are bonfires in all but name. Reach one of these highly sought after objects and you can trade your Axioms in for levels and upgrade your stats depending on your play style. This is another game feature that is rooted deep within the Souls games. Stats govern what armour and weapons you can use as well as bonuses for using said items. It is a system I enjoy a lot and I feel no different here.

Hellpoint is so much like the game it took inspiration from that I would be here all day talking about its similarities. The boss gates, the way levels are made, as in shortcuts you unlock to make tracking back to where you died easier, the combat system. Even a player messaging system that Dark Souls is known for is also present and accounted for. So now I have mentioned all the similarities, well some of them anyway, we should really discuss what Hellpoint tries to do differently, which between you and me, is not a massive amount.

Striving To Be Different

Hellpoint does have a few novel things going for it, but they don’t really make the game stand out enough for it to have its own identity. Firstly, your healing items recharge as you are killing waves and waves of foes. I liked this system a lot, it means when you are low on health you can tank up a bit, take it slow and survive longer. It rewards conservative, careful play and I appreciated it. It made elongating my lives more manageable.

There is also another system which took me a while to get used to and is never truly explained unless I overlooked it somewhere. In the top left corner of your screen, there is what can only be described as a space clock. I wondered for a while what it was and I also noticed that sometimes I would get different enemies and ominous situations would arise. Well, these two phenomena are linked. At certain times, when storms align, more demons roam and the whole world gets more deadly. It was a welcomed system that made certain parts of the game different as you wandered through them.

This also leads to small, arena-like areas for you to battle in which at times became completely unmanageable for me. Maybe it was just the one I ended up in but it was very small, extremely crowded and I could not kill the enemies fast enough. Death ensued very quickly. In the end, I just waited for the storm to pass, for the arena area to disappear and I hoovered up my Axioms and went about my business. Do these demons not know I have a review to write?

Hellpoint has local multiplayer too, which is a first (I think) for games of this type. I had a quick blast with my kid but he just proceeded to leave me to fight the enemies while he ran around like a headless chicken. Bless him, this is no Fortnite son! It is a welcomed, fun feature and if you have someone close by to play with, I am sure it will make your journey less stressful. Local multiplayer is not thought about enough these days in my opinion and I applaud the developers for including it. Just play with someone who plays more than just Fortnite.

Everything else aside, my main issue with Hellpoint was its variable framerate and sluggish responsiveness. Even when I had my character trimmed down to barely any armour, so my weight stat was low, he was still too delayed to respond to my movements. In a game where pinpoint dodging, blocking, and movement are paramount, a sluggish feeling character is not much fun at all. Unfortunately, coming off the back of playing other third-person action games that responded well to my inputs magnified this even more.

The framerate, which on the whole was OK, sometimes dropped a few frames here and there. This in conjunction with the above mentioned sluggishness meant that the combat system, which is the tried and tested Dark Souls formula, felt slow and most of the time, not enjoyable. Maybe these niggly issues can be tackled post-launch but in my opinion, they made what could have been a fun combat system feel too weighty and inconsistent.

Hellpoint, Close But So, So Far

While I did mostly enjoy Hellpoint, being a massive fan of the games it takes inspiration from did it no favours. It looks good at times and the sound work is fine. Although both aspects are never amazing. The framerate was at times poor, the controls unresponsive and it overall just feels like a poor imitation of the best games in the genre. That being said, if you have played every game of this ilk and you are craving this type of gameplay, it’s not a complete washout.

The fun gameplay loop is still there, the exploration, the shortcuts and level traversal are all still enjoyable. Building your character the way you like is still fun. The push-your-luck gameplay that the Souls games are known for is still present and it is still rewarding. You still get that great feeling when you are in possession of a lot of XP, have very little health left, and manage to find a breach to cash it all in. Not many games have this rush of adrenaline and it is no different in Hellpoint. I just wish the other parts of the game were up to the same standard.

I love these types of games but Hellpoint, mainly due to its framerate, responsiveness, and lore, falls behind most other games in the genre. Its exploration, character building and combat is a carbon copy of Dark Souls but it lacks the substance, character, and playability of the games it takes its inspiration from. Its a shame really, unless you have played every other game in this genre, there are many better examples of this style of game to play.